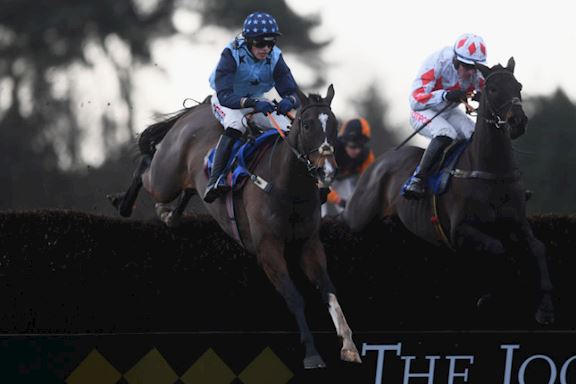 Trained in Devon by Kayley Woollacott, The Kings Writ (10st 6lb) has climbed 24lb in the handicap on his last three starts to a rating of 131.

The eight-year-old ended last season with an impressive success over three miles in a handicap chase at Exeter.

He fell at the last when clear on his comeback at Chepstow in November, but made amends last time out when winning another handicap chase in good style at Exeter on December 20, both over just short of two and a half miles.

Woollacott said today: "The Kings Writ is in great form.

"Cheltenham will be a step up in grade, but he has been running well all season and deserves his chance in a better race.

"We have always really rated him at home and we hoped there was improvement there."

We were disappointed with him in his first season over hurdles [2016/17], though that was probably down to him being too weak.

"He then went pointing a couple of times the following season and since then, has gone from strength to strength.

"I think he is quite flexible in regards trip, but he does travel very well in his races, which is why we have brought him back in trip this season. Over three miles, they do not go quickly enough for him in the first half of the race.

"Two and a half miles seems to suit him well and I think that has brought out quite a bit of improvement."

He will be the bottom-weight and should get a run, though with 20 engaged and the maximum field being 17, there could be a danger of King's Writ being eliminated.

Leading Irish trainer Gordon Elliott has entered Blow By Blow (11st 9lb), winner of the Martin Pipe Conditional Jockeys' Handicap Hurdle at Cheltenham last season. Blow By Blow scored impressively on his chasing debut at Galway in October and has since finished third in the G1 Neville Hotels Novice Chase at Leopardstown over Christmas.

The top-weight is the locally-trained nine-year-old Activial (11st 12lb) from Tom George's Slad yard, who has won a Haydock Park handicap chase and gone close in similar races at Ascot and Stratford on his three starts since November.

Festival Trials Day offers the last racing at Cheltenham ahead of the four days of The Festival™ presented by Magners in March.

The going at Cheltenham is currently: Good to Soft, Good in places

Conditions are forecast to be dry until Saturday, when three to four millimetres of rain is expected.

There are no weather issues expected ahead of Festival Trials Day and tickets are available for purchase at www.cheltenham.co.uk