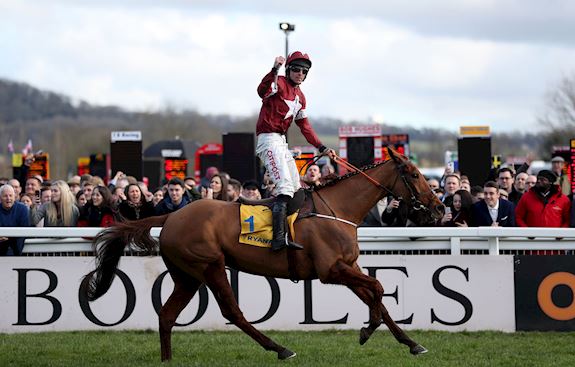 Leading Jockeys at The Festival™ presented by Magners

The experienced Irish rider, who partnered his first winner at The Festival in 2006, narrowly edged out fellow Irish jockey Jack Kennedy. Both riders achieved four winners over the four days last year, with Russell taking the honours thanks to a second.

Russell's victories in 2018 included a stunning 377/1 treble on St Patrick's Thursday. His first winner of the week came in the G1 RSA Insurance Novices' Chase on Presenting Percy, who is being aimed at the G1 Magners Cheltenham Gold Cup on March 15. His tally at The Festival is now 22 and he moves into clear sixth place in the post-1945 list.

It was truly a season to savour for Russell as he went on to win the Randox Health Grand National at Aintree the following month on Tiger Roll.

Previous winners of the Holland Cooper Leading Jockey Award are listed below, with current jockeys in bold

LEADING CURRENT JOCKEYS AT THE FESTIVAL

TOP JOCKEYS AT THE FESTIVAL

Most successful jockeys in the Magners Cheltenham Gold Cup

Most successful jockeys in the Unibet Champion Hurdle

Most successful jockeys in the Betway Queen Mother Champion Chase

Most successful jockeys in the Ryanair Chase

Most successful jockeys in the Sun Racing Stayers' Hurdle

Welsh jockey James Bowen's burgeoning CV includes a Welsh Grand National success, but a first victory at The Festival™ presented by Magners is something the 17-year-old rider is craving when the four-day gets underway on Champion Day, Tuesday, March 12 at Cheltenham Racecourse, a date which coincidentally marks Bowen's 18th birthday.

Bowen, who started riding on the official pony circuit when he was eight, was quickly identified as a future star when partnering 30 winners in his first point-to-point season - a British record for a novice rider. His first ride and victory came on his 16th birthday. Many of his point-to-point winners were trained by his eldest brother Mickey.

Having ridden out for leading Irish trainer Gordon Elliott for three summers from when he was 12, Bowen knew "from the age of eight that I was going to be a jockey."

Bowen turned professional in May 2017, rode his first paid winner aboard Curious Carlos (Cartmel, May 27) and was soon snapped up by Britain's champion Jump trainer and Seven Barrows maestro Nicky Henderson to be the yard's conditional jockey.

He enjoyed a stellar first season under Rules as he was crowned Britain's leading conditional with 58 winners at a 17% strike-rate and amassed over £733,000 in prize money.

The young rider's meteoric rise in 2018 also saw Bowen become the youngest jockey to win the G3 Coral Welsh National on the Gavin Cromwell-trained Raz De Maree (the oldest horse to win the race at 13 since 1945).

William Henry was another big-race winner for Bowen as he guided Henderson's charge to success in the Listed Lanzarote Handicap Hurdle at Kempton Park in February, 2018. He also partnered the Henderson-trained Jenkins to victory in the G3 Holloway's Handicap Hurdle as Ascot.

A fine season for Bowen was capped with a nomination for the BBC's Young Sports Personality of the Year award, in which he made the final shortlist of three.

Reflecting on last season, Bowen, whose father Peter is a G1 winning trainer and brother Sean is a fellow jockey, said: "Last season was an unbelievable season for me.

"It was an honour to win the Welsh Grand National and it was great to win a couple of big races for Mr Henderson.

"I was so grateful to all the people that made it happen and hopefully that success can continue this season."

One of the low points of an otherwise stellar season was his defeat aboard the Richard Hobson-trained Shantou Flyer in the G3 Ultima Handicap Chase at The Festival in 2018.

The pair came within a neck of providing the Welshman with a first success at The Festival in the competitive handicap, but just came up short against the Nick Williams-trained Coo Star Sivola.

Bowen, whilst not dwelling on the defeat, still recalls the day with mixed emotion, explaining: "My loss on Shantou Flyer was one of the most frustrating things of 2018.

"I have watched the replay back a few times because I blamed myself for the ride, but at the same time you have to say to yourself what you did instinctively at the time, is normally the best thing to do."

Shantou Flyer went on to be Bowen's first ride in the Randox Health Grand National at Aintree in April, further cementing the wealth of experience the youngster has accrued in big races throughout the Jump racing calendar. James emulated his brother Sean by riding in the world's most famous and richest chase as a 17-year-old.

Bowen rode out his claim with 75 winners in less than a year and is on track to enjoy his best season in the saddle, having recorded 55 successes (as of February 6) in 2018/19.

Notable victories this campaign have come aboard French import Valtor in the Listed Gerrard Silver Cup at Ascot and the talented Mister Fisher in the G2 Sky Bet Supreme Trial Rossington Main Novices' Hurdle at Haydock Park, both for Henderson.

Mister Fisher looks set to take his chance in The Festival™ presented by Magners traditional curtain-raiser, the G1 Sky Bet Supreme Novices' Hurdle and Bowen was effusive in his praise of the five-year-old son of Jeremy.

Bowen continued: "I think Mister Fisher has a real engine. I was very impressed with his performance at Haydock as he knuckled down well when coming under pressure and his jumping held up well.

"He is still quite an immature horse, but has improved with every race and hopefully he can improve again at Cheltenham."

Jump racing's superstar Altior will bid to equal Big Buck's all-time record of 18 consecutive victories when he bids to capture back-to-back renewals of the G1 Betway Queen Mother Champion Chase at The Festival and Bowen describes it as "a pleasure" to see Altior every day at Seven Barrows.

He remarked: "It is a real pleasure to work at Seven Barrows and ride a number of top-class horses. However, the one who stands out has to be Altior.

"It is a privilege to see him in work every morning and it would be very special if he could win the Champion Chase for the second year running."

Discussing Cheltenham, Bowen commented: "Growing up, the Cheltenham Festival was something my brothers and I would always look forward to.

"We would always have a half day at school as Dad used to pick us up from school at lunchtime on every day that Cheltenham was on."

With this year's meeting just around the corner, the desire to ride a winner at the pantheon is not lost on the young rider.

He said: "It is always special to have any winner at Cheltenham and I have already been lucky enough to have success at the track. However, it would mean the world to me to have a winner at The Festival.

"Coming so close last year has only given me further motivations this time.

"It is never going to be easy to have a winner at The Festival and that is why it would be a special experience to come back into the winner's enclosure in March.

"It is a class experience to even ride in any race at The Festival, let alone winning one."

Female Jockeys at The Festival

2018 was the best year yet for female jockeys at The Festival, with four victories, each provided by a different rider - with Lizzie Kelly becoming the first professional female jockey to triumph, followed by Bridget Andrews, while amateurs Harriet Tucker and Katie Walsh, who retired from race riding the following month, also enjoyed memorable victories. Another leading Irish amateur, Nina Carberry, who has the best record of any female rider at The Festival with seven wins, also stepped back from race riding in April, 2018.

Overall: 14 winning female jockeys, with 23 winners between them