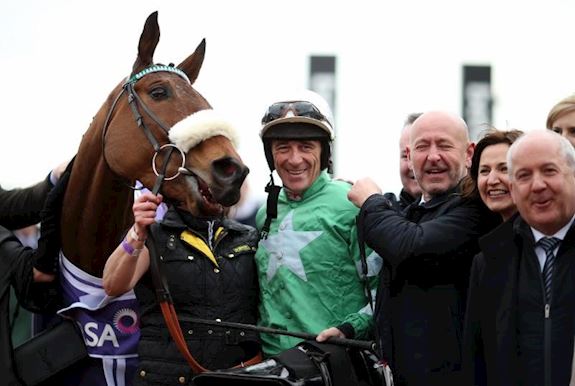 Connections have been keen to get another run into the gelding, however he was ruled out of the G2 Red Mills Chase at Gowran Park on February 16 due to the going. The G3 Bobbyjo Chase at Fairyhouse on Saturday, February 23, has now been earmarked as a potential prep run before he bids for a third win in succession at The Festival. Ground conditions will again to play a crucial role as to whether he takes up that engagement.

Presenting Percy has yet to run over fences this season, but his lack of recent experience over fences is not fazing Reynolds.

The owner, who has also tasted success at The Festival with the Kelly-trained Mall Dini, reported today: "Presenting Percy is in great form. I saw him at the weekend and the horse is absolutely terrific - he is in great shape.

"We could have run him last weekend in the Red Mills Chase and we could indeed run him this weekend in the Bobbyjo - every bit of rain which we are getting at the moment helps.

"The intention after winning the Galmoy was to run in the Red Mills as that was the same route he took last year before the RSA.

"Pat had the horse in as good shape as he wanted him to be. I don't want to say anything negative about the ground, but they were going to be jumping out of ground that had been used two weeks earlier and the ground at Gowran was as bad a ground we have had in Ireland all year.

"Presenting Percy is as well as we want him to be and as we have sat and sat all year waiting to get him out, we didn't want to risk him on that ground.

"Pat and I are not going to have many opportunities to win a Gold Cup, so we just had to be extra careful with the horse.

"We are promised rain this week, so we are going to keep the race on Saturday under review. There are 11 entries for Saturday and it would be nice to get him out again in a small field to try and minimise as much risk as possible.

"I would say that it is 50/50 as to whether he would run on Saturday, but hopefully he will run."

(registered as the Baring Bingham)

(registered as the Fred Winter)

(registered as the Spa Novices' Hurdle)