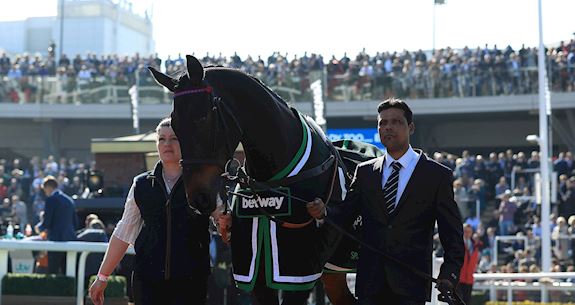 Sprinter Sacre returns to The Festival to parade on Ladies Day

Tuesday, February 26, 2019 - One of the all-time greats Sprinter Sacre will parade at Cheltenham next month on day two of The Festival™ presented by Magners, Ladies Day, Wednesday, March 13.

Sprinter Sacre will appear at 12.45pm ahead of the racing which features the G1 Betway Queen Mother Champion Chase (3.30pm), a race he won by 19 lengths in 2013 during a 10-race unbeaten streak and again memorably in 2016 after overcoming a series of setbacks.

Described by his trainer Nicky Henderson as "the horse of an absolute lifetime," Sprinter Sacre won on 18 of his 24 career starts, earning over £1.1 million in prize money. His Timeform rating of 192p is bettered only by Arkle and Flyingbolt.

The retirement of Sprinter Sacre was announced by Henderson at Cheltenham Racecourse on Sunday, November 13, 2016 during The November Meeting and he now resides in the Cotswolds with Vicky Roberts.

"A typical day for him is to be fed first thing, mucked out and then ridden. He then gets turned out for the rest of the day. When he comes back in, he has a change of rugs and then it is bedtime.

"The horse is learning to adjust to a different way of life, without the regimental regime of being in training. He will do other things in the future. At the moment, his body is able to do other things, but he is still very hot-headed.

"I will be accompanying Sprinter Sacre to Cheltenham next month. I have been in racing all my life - I rode as a conditional and also trained - so taking a horse to the races is pretty much the norm for me.

"However, Sprinter Sacre is a such a legend and The Festival is getting very close. Not many people would have a horse like Sprinter Sacre to parade and I know it will be all eyes on him at 12.45pm, so I do get a few butterflies in the stomach when I think about it.

"He is one of 14 horses I have here. I also look after horses for other racehorse trainers that are on box rest and recovering from knocks or wind operations.

"Sprinter looks really well and it will be great for him to see his fans at The Festival - he really knows how special he is."

Sprinter Sacre previously paraded at Cheltenham Racecourse when his retirement was announced in November, 2016 and also on Ladies Day at The Festival in 2017.

One of the best chasers ever. A high-class novice hurdler in 2011, he finished third in the Grade One Supreme Novices' Hurdle at The Festival over an extended two miles.

He was unbeaten in his next 10 phenomenal starts, all over fences, with seven Grade One triumphs and two Grade Two wins among them. The first season as a chaser saw a spectacular success in the two-mile Racing Post Arkle Chase at The Festival in 2012, beating Cue Card by seven lengths, before victory in the Grade One Maghull Novices' Chase at Aintree.

He returned with a tremendous victory in the Grade One Tingle Creek Chase at Sandown Park in December, 2012 and was even more impressive when beating Sizing Europe by 19 lengths in the Queen Mother Champion Chase over two miles at The Festival in 2013. He also won for the second successive year at Aintree Racecourse, when stepping up to two and a half miles for the first time, in the Grade One Melling Chase and overcoming Cue Card easily again. He completed that flawless season with success in the Grade One Champion Chase at Punchestown in Ireland.

Problems with his heart were diagnosed later in the year and he was pulled up at Kempton Park on December 27, 2013. He did not race again for 13 months and his three appearances from January to April in 2015 suggested Sprinter Sacre was not the horse he had once been.

But Nicky Henderson proved the sceptics wrong. Sprinter Sacre reappeared at The November Meeting at Cheltenham in November, 2015 in the Grade Two Shloer Chase. He won easily by 14 lengths under Nico de Boinville and was given a tremendous ovation by the appreciative crowd.

He won another Grade Two, the Desert Orchid Chase at Kempton Park over Christmas and returned to Cheltenham at The Festival in March, 2016 to capture the Betway Queen Mother Champion Chase again to rousing cheers all around, with Un De Sceaux three and a half lengths back in second.

His final start came in the Grade One Celebration Chase at Sandown Park on April 23, 2006 (his 10th birthday to the day) when he was the easy winner by 15 lengths from Un De Sceaux.

On announcing Sprinter Sacre's retirement on November 13, 2016, Nicky Henderson said: "Sprinter Sacre been a great part of my life. It's been an extraordinary journey. If we'd finished it after Kempton [when he was pulled up in the Desert Orchid Chase in December 2013] then he would have just been the most fantastically good racehorse and you would have been able to leave it alone.

"But what happened last year is something that will never be repeated, in terms of emotions anyway - it took us all to the brink.

"Ability and charisma went together with him - very often they don't. You go to the sales and buy a beautiful horse and nine times out of 10 they are rubbish - just very pretty. He was the epitome of the horse who looks the part, moves the part, and it has worked."

Sprinter Sacre won nine Grade Ones in all. Five of the horse's 18 victories came at Cheltenham, the Home of Jump Racing.