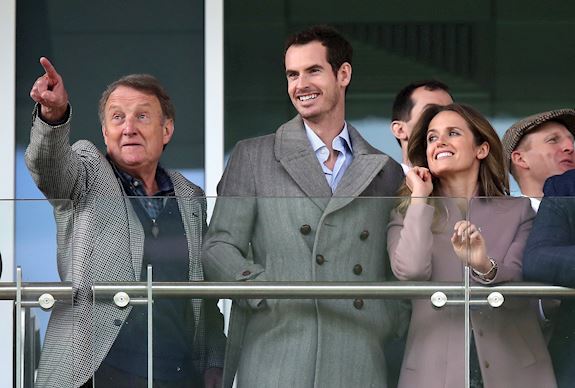 ALTIOR, ANDY AND ASSORTED HATS
Altior and Andy Murray feature heavily in the national coverage of day two of The Festival, with Ladies Day "fashion" getting a good look-in as well.
Pictures of the tennis star and his wife appear on the front page of the Daily Express, and inside most of the papers, including The Daily Telegraph and The Times.
The Times' Cheltenham pull-out has a full-page picture of Betway Queen Mother Champion Chase heroes Altior and Nico de Boinville on its cover, while in the The Guardian Greg Wood writes about the horse's "unshakeable will to win." In The Daily Telegraph, Paul Hayward describes de Boinville as "the coolest cat in the weighing-room", while The Sun's Steve Jones says that Altior "teased his rivals and tormented his trainer."
Alastair Down heads up the cheerleaders for Glenfarclas Cross Country Chase winner Tiger Roll in the Racing Post, describing him as "pure rock 'n' roll," while in The Daily Telegraph ITV Racing's Ed Chamberlin extols the virtues of his "beloved Tiger Roll".
Many of the papers report on Sir A P McCoy's "disgust" at what he sees as the BHA's "disgraceful" behaviour towards the jockeys penalised by the stewards in Tuesday's National Hunt Chase.
There's a Guardian Sport feature on women in racing, centring round Rachael Blackmore's success: "Blackmore's achievements will not stop being extraordinary until people no longer feel compelled to highlight them in a way they wouldn't if she was a man", declares Barry Glendinning.
Moving on to today's action, Paisley Park in the Sun Racing Stayers' Hurdle is the overwhelming choice for tipsters. In The Daily Telegraph, Marcus Armytage says that the horse's "upward curve has been almost vertical this season", while the I's Jon Freeman is also a Paisley Park fan, saying, "he ticks every box, most importantly his trademark strong finish". Marcus Townend's feature about the horse, his owner and his trainer in the Daily Mail is probably the most comprehensive and informative to date.
But there are other views; the Guardian's Chris Cook plumps for Supasundae, while The Times' Rob Wright selects Bacardys. In The Sun, Templegate goes for Top Notch in the Stayers' Hurdle - "Hendo to rack it up a Notch".
The Times' Paddy von Behr, as well as hoping that Paisley Park can give owner Andrew Gemmell his "greatest day", reveals that not only did TV presenter Eamonn Holmes propose to his wife at Cheltenham, but that Red Rum, extraordinarily, was the first horse comedian Lee Mack ever rode - he mucked out for Ginger McCain for £25 a week.
As it was Ladies Day yesterday, Cheltenham fashion figures prominently in the coverage, with the Gloucestershire Echo's front page given to two smiling women wearing blue hats. An inside spread of pictures continues the theme, but on the sports pages Melissa Jones comprehensively rounds up the racing stories. There is an interview with fashion designer Jade Holland Cooper, sponsor of the meeting's leading jockey award, in the weekend supplement.
The Daily Mail features Cheltenham fashion and "celebs", including the Royals, on a double-page spread of pictures.
Irish model Vogue Williams appears (fully clothed) on page three of the Daily Mirror wearing scarlet tartan while, inside the 12-page Cheltenham supplement, David Yates says that it is "courage and class" that make a great racehorse like Altior. De Boinville is depicted kissing his Queen Mother Champion Chase trophy.
The Festival appears in the Daily Star's leader column: "The organisers have pulled off another sensational festival", it declares. The Murrays make it on to pages eight and nine, while Jason Heavey is so convinced that Paisley Park will take the Stayers' Hurdle that it is headlined "Walk in the Park".
Altior gets a mention on the back page of The Sun - as does golfer Lee Westwood's success in winning £48,200.91 from a £240 stake. 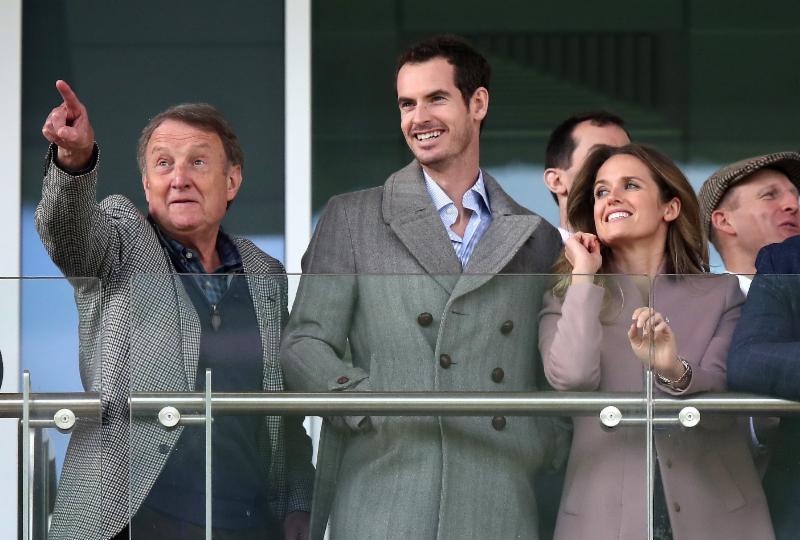 PUNTERS LOOKING FOR WALK IN THE PARK
Punters responded to disappointment on the first day of The Festival 2019 by landing a telling blow over bookmakers on Ladies Day at The Festival™ presented by Magners. Four winning favourites in succession Altior (4/11f G1 Betway Queen Mother Champion Chase), Tiger Roll (5/4f G1 Glenfarclas Cross Country Chase), Band Of Outlaws (7/2f G3 Boodles Juvenile Handicap Hurdle) and Envoi Allen (2/1f G1 Weatherbys Champion Bumper) proved the perfect tonic for bettors in yesterday's last four races.
Paisley Park is a warm favourite for today's three-mile hurdling championship, the £325,000 G1 Sun Racing Stayers' Hurdle (3.30pm) as he bids to extend his unbeaten run this season to five. The Emma Lavelle-trained gelding has progressed rapidly this term and followed up a G1 success in the Long Walk Hurdle at Ascot in December with a striking 12-length victory in the G2 Cleeve Hurdle at Cheltenham on Festival Trials Day in January. Paisley Park is the general 7/4 favourite across the board for the Sun Racing Stayers' Hurdle. The Nicky Henderson-trained Top Notch, third to Paisley Park in the Long Walk Hurdle, has constricted in price to 12/1 from 16/1 with Unibet.
In the opening £150,000 G1 JLT Novices' Chase (1.30pm), Philip Hobbs' Defi Du Seuil, who defeated Lostintranslation in the G1 Scilly Isles Novices' Chase at Sandown Park in February, is a solid 11/4 market leader with Bet365. The Kim Bailey-trained Vinndication finished third to Defi Du Seuil at Sandown and he has been trimmed into 15/2 from 9/1 with William Hill.
The Gordon Elliott-trained Sire Du Berlais has been well-supported in the run-up to the £100,000 G3 Pertemps Network Final (2.10pm) and he remains solid at around the 5/1 mark for the three-mile contest. Champers On Ice represents David Pipe and he returned from a long absence to finish a good fourth at Haydock in February. He is 11/1 from 14/1 with Sky Bet.
The £350,000 G1 Ryanair Chase (2.50pm) is an excellent renewal and punters are opting to support Noel Meade's Road To Respect for the two mile and five-furlong event. Fourth in last season's Magners Cheltenham Gold Cup, the eight-year-old son of Gamut is the 7/2 favourite from 4/1 with William Hill.
Nicky Henderson's Janika has been strongly fancied for the £110,000 Listed Brown Advisory & Merriebelle Stable Plate (4.10pm) in the build-up to the race and he is a solid 4/1 market leader from 5/1 with Betfred following two second-placed efforts this term.
Willie Mullins has won all three renewals of the £90,000 G2 National Hunt Breeders Supported By Tattersalls Mares' Novices' Hurdle (4.50pm), but Nicky Henderson saddles the favourite for this year's contest courtesy of Epatante,who has impressed in two starts for the master of Seven Barrows. The five-year-old daughter of No Risk At All is a 2/1 shot. Her stable companion Lust For Glory, an easy winner at Newcastle last time out, is the each-way mover in the race at 14/1 from 16/1 with Sky Bet.
In the concluding £70,000 Fulke Walwyn Kim Muir Handicap Chase, Any Second Now is the best-backed horse of the day with William Hill who make Ted Walsh's charge, the mount of Derek O'Connor, a 6/1 shot from 10/1. The seven-year-old son of Oscar has yet to win in nine starts over fences, but shaped well when fifth in the valuable Paddy Power Handicap Chase at Leopardstown in December.
Market Movers
1.30pm G1 JLT Novices' Chase - Vinndication 15/2 from 9/1 (William Hill)
2.10pm G3 Pertemps Network Final - Champers On Ice 11/1 from 14/1 (Sky Bet)
2.50pm G1 Ryanair Chase - Road To Respect 7/2 from 4/1 (William Hill)
3.30pm G1 Sun Racing Stayers' Hurdle - Top Notch 12/1 from 16/1 (Unibet)
4.10pm Listed Brown Advisory & Merriebelle Stable Plate - Janika 4/1 from 5/1 (Betfred)
4.50pm G2 National Hunt Breeders Supported By Tattersalls Mares' Novices' Hurdle - Lust For Glory 14/1 from 16/1 (Sky Bet)
5.30pm Fulke Walwyn Kim Muir Handicap Chase - Any Second Now 6/1 from 10/1 (William Hill)
LATEST NON-RUNNERS
4.10pm Brown Advisory & Merriebelle Stable Plate Handicap Chase (Class 1) (Grade 3) 2m 4f 184y
10 Ballyhill (FR) (Self Certificate, Bruised Foot)
20 Romain de Senam (FR) (Self Certificate, Not Eaten Up)
5.30pm Fulke Walwyn Kim Muir Challenge Cup Amateur Riders' Handicap Chase 3m 2f 75y
Out Sam (Self Certificate, Lame)