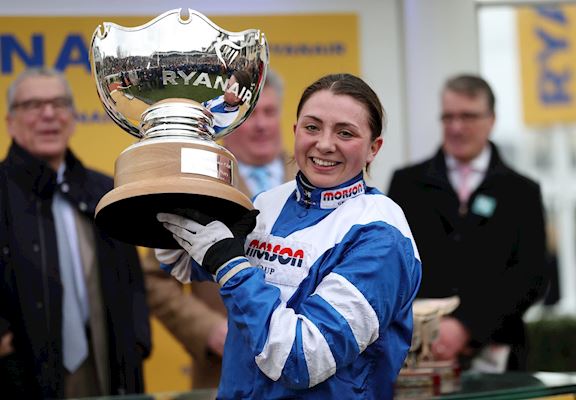 BRYONY IS PURE GOLD FOR THE PRESS

Derby Day, Grand National Saturday and Magners Cheltenham Gold Cup Day at The Festival™ - the trio of peaks in British racing, and brought to you by today's racing press.

Horse racing in glorious colour gallops through the pages, with tips and previews of today's famous G1 steeplechase, reviews of yesterday's storming action, and photographs that depict the thrill of racing for the thousands of racegoers who flock to the Cotswolds.

'Going for Gold' is a headline on the front of the Western Daily Press, alongside a photo of last year's big-race winner Native River, but that publication was always likely to lead on West Country star, Bryony Frost, who became the first woman to land a G1 race over fences or hurdles at The Festival when riding Frodon to victory in the Ryanair Chase. 'Bryony makes Festival history' is the paper's headline alongside a shot of the jockey, her arms raised.

Frost has three hand manoeuvres; palm across mouth in disbelief (as witnessed by a photo in The Guardian), thumbs up and fore-fingers down. She often uses the latter to point at the head of the winners she rides, a signal that they, and not her, deserve the crowd's appreciation. The Daily Telegraph's racing special opts for a fingers-down photo showing Frost and Frodon entering the winner's enclosure. 'First lady' is the headline.

Frost makes the front cover of The Times, and also of the same paper's Cheltenham Festival pull-out, which is devoted to a shot of Frodon being driven to the line alongside the headline 'Trailblazer'. The Daily Telegraph describes the jockey as 'Wonder woman' in its front-page acknowledgement of her win.

Not that Frost is the only richly-talented female from the West Country, as Devon's Lizzie Kelly reminded us with victory on Siruh Du Lac in the Brown Advisory and Merriebelle Stable Plate. 'Frost and Kelly make it Ladies Day all over again' claims the Western Daily Press, while the Daily Star headlines Chris Goulding's review with 'Bry 'n mighty' and 'Frost makes history as girl power rules'.

'Bryonair' is a Racing Post headline above David Jennings's assessment of Frost's victory. "We didn't want this particular Ryanair flight to land," he writes, while his colleague, Lee Mottershead, reflecting on wins by Frodon and Paisley Park in the G1 Sun Racing Stayers' Hurdle, claims it was ". . . an afternoon that delivered one of the greatest hours in Cheltenham Festival history." That article sits next to a raft of photos depicting the elation experienced by Andrew Gemmell, Paisley Park's owner, who may be blind, but undoubtedly felt the emotion. As Marcus Armytage puts it in The Daily Telegraph, ". . . it was a day when even the reserve handkerchief found employment".

'Their moment in the Sun' is the headline on The Sun's racing pullout alongside a photo of Gemmell and his horse with jockey Aidan Coleman, while Brough Scott, writing in The Times, says: "I have been to 57 Cheltenham Festivals and don't remember enjoying and being moved by a day's racing in a happier way than this."

So deep were the stories surrounding yesterday's action that today's piece de resistance, the £625,000 G1 Magners Cheltenham Gold Cup, is in danger of being over-shadowed. It fights its way into the headlines on tradition and the stellar strength of today's field - but who will win?

Michael Verney of the Irish Independent believes Bellshill can become the first winner of the legendary race for Willie Mullins - he has saddled the runner-up six times - but on the same page the trainer's son, Patrick, writes of the stable's four runners: "I struggle to see ours beating an on-form Presenting Percy," which is the view of the Daily Mail and Daily Express. The last-named prints a photo of Pat Kelly's chaser in jumping pose on the cover of its racing special.

Steve Jones of The Sun, Chris Cook of The Guardian and Newsboy of the Daily Mirror select Elegant Escape, one of three runners from Colin Tizzard's stable, but Rob Wright of The Times and Marcus Armytage of The Daily Telegraph opt for Clan Des Obeaux. Jason Heavey of the Daily Star nominates Native River for a repeat win, while the Racing Post's Paul Kealy suggests Al Boum Photo each-way.

OBEAUX ALL THE RAGE FOR GOLD CUP

The final day of The Festival™ presented by Magners is upon us and punters are looking for further success following another profitable day at The Home of Jump Racing. Defi Du Seuil (3/1f G1 JLT Novices' Chase), Sire Du Berlais (4/1f G3 Pertemps Network Final) and Paisley Park (11/8f G1 Sun Racing Stayers' Hurdle) all rewarded favourite backers, with the one shock result of the day being the 50/1 success of Eglantine Du Seuil in the G2 National Hunt Breeders Supported By Tattersalls Mares' Novices' Hurdle.

Jump racing's Blue Riband event, the £625,000 G1 Magners Cheltenham Gold Cup (3.30pm), takes centre-stage this afternoon and the Paul Nicholls-trained Clan Des Obeaux has attracted a flood of money in the betting offices. The King George VI Chase winner backed up that success with an emphatic win in the G2 Betfair Denman Chase and he is the 9/2 second-favourite from 13/2 with Betfred. Irish raider Presenting Percy remains the 4/1 market leader for the three and a quarter-mile contest, but he has been uneasy in the market this morning. Last year's 1-2 Native River (13/2) and Might Bite renew their rivalry, with drying ground conditions seeing support for Nicky Henderson's charge, who is a 12/1 shot from 14/1 with BetVictor.

In the opening contest this afternoon, the £125,000 G1 JCB Triumph Hurdle (1.30pm), the Joseph O'Brien-trained Sir Erec has long been earmarked as the "Irish banker" of the meeting. Unbeaten in two starts over hurdles, the four-year-old son of Camelot is the solid 10/11 favourite across the board. Opposition to him in the betting market has emerged from Paul Nicholls' Quel Destin, who has constricted in price to 5/1 from 8/1 with Betfred.

The £100,000 G3 Randox Health County Hurdle (2.10pm) is a notoriously tricky puzzle for punters to solve and this year's renewal looks no different. The Willie Mullins-trained Whiskey Sour heads the betting following an eye-catching seventh on his last run over hurdles in the Galway Hurdle in August. He is the 4/1 favourite from 11/2 with BetVictor. Monsieur Lecoq was a creditable second in the Imperial Cup last weekend for Jane Williams and the Lizzie Kelly-ridden five-year-old son of Diamond Boy is an 8/1 shot from 12/1 with Betfred.

The £125,000 G1 Albert Bartlett Novices' Hurdle (2.50pm) boasts a field brimmed full of talent and the Nicky Henderson-trained Birchdale, successful on Festival Trials Day at Cheltenham on January 26, is the 9/2 market leader with Ladbrokes from 5/1 for the three-mile contest.

Amateur rider Alex Edwards finished second on Kilfilum Cross in yesterday's Fulke Walwyn Kim Muir Handicap Chase and his mount in the £45,000 St James's Place Foxhunters Chase (4.10pm), the Philip Rowley-trained Hazel Hill, is the one for money in the three and a quarter-mile event. The 11-year-old son of Milan is unbeaten in three chase starts under rules and is a 9/2 shot from 5/1 with BetVictor.

Gary Moore saddles the progressive Not Another Muddle, who is seeking a fourth victory from five starts over fences, in the two-mile £110,000 G3 Johnny Henderson Grand Annual Handicap Chase. A convincing winner at Sandown Park in February, the eight-year-old son of Kayf Tara is a 5/1 chance from 6/1 with BetVictor.

In the concluding race of The Festival 2019, the Gordon Elliott-trained Dallas Des Pictons is the well-backed 3/1 favourite across the board for the £70,000 Martin Pipe Conditional Jockeys' Handicap Hurdle (5.30pm). The six-year-old son of Spanish Moon is unbeaten in his last two starts for Elliott, who is targeting a second success win in the contest following Champagne Classic's victory in 2018. Top-weight Early Doors represents Joseph O'Brien and he is a 7/2 shot from 7/1 with Betfred.