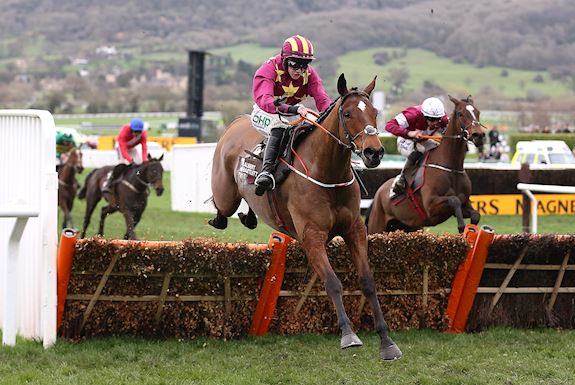 Henry de Bromhead left Cheltenham deflated on Thursday after the strongly-fancied Monalee finished only fourth in the G1 Ryanair Chase, but he was back on very good terms with himself when 50/1 chance Minella Indo pulled off one of the shocks of the meeting by beating Commander Of Fleet (4/1 favourite) by two lengths in the G1 Albert Bartlett Novices' Hurdle over three miles.
Like Monalee, who returned with sore shins, Minella Indo races in the colours of Barry Maloney, and De Bromhead said: "It's fantastic, and I'm delighted to get it for these guys.
"We've been trying to get one for a few years, and although Monalee ran well yesterday we were a little bit flat afterwards.
"It's amazing to come back with this guy. We always liked him and Rachael (Blackmore) thought he'd improve for Clonmel. He just dragged her around for three miles. It was brilliant."
Maloney, a university friend of the trainer, was thrilled and said: "It's so exciting - just wonderful. Henry's done a fantastic job and Rachael gave him a dream ride. I'm not going to apologise for getting so excited. I backed him at 80/1!"
De Bromhead has been a big supporter of the jockey and said: "We've been so lucky to have her. She's a brilliant rider. What can you say - she just wins."
He added: "I couldn't understand why we were 50/1. It was mad. He ran really well at Clonmel where he had to do all the donkey work, and he was beaten only two lengths by Alloha who was only 8/1 here. We thought we would get a stronger run race here and were keen to take the chance if he got in."
The trainer and jockey won on the first day of The Festival 2019 with A Plus Tard in the Close Brothers Novices Handicap Chase. 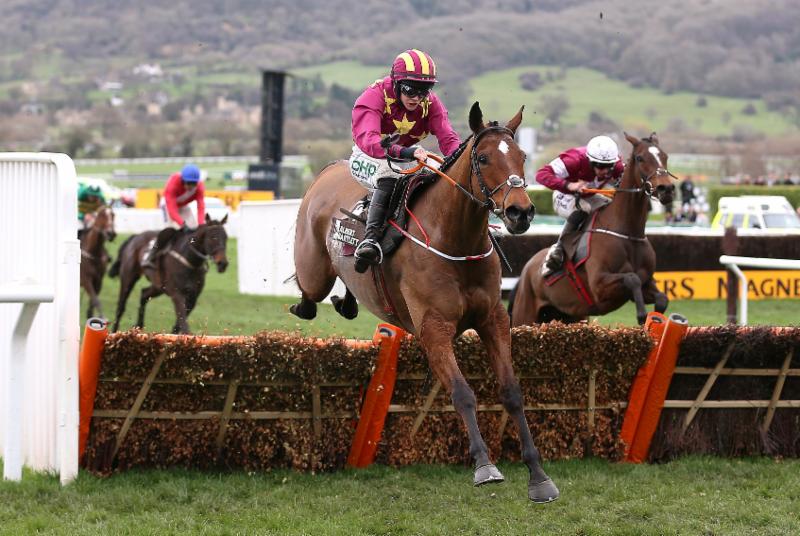 AFTER BRYONY ITS RACHAEL FOR FESTIVAL GRADE ONE WIN
Rachael Blackmore rode her second winner of the week when landing the £130,630 G1 Albert Bartlett Novices' Hurdle on 50/1 outsider Minella Indo, trained by Henry de Bromhead.
Blackmore follows Bryony Frost who yesterday became the first woman rider of a G1 race over hurdles or fences at the Festival, and Katie Walsh, who won last year's G1 Weatherbys Champion Bumper on Relegate. Her success was the fourth by a woman at this year's Festival, equalling the record total of 12 months ago.
Blackmore, who scored on A Plus Tard in Tuesday's Close Brothers' Novices' Handicap Chase, said: "We thought that he was coming here with a great chance, but anything can happen. I am so grateful to everyone for giving me the opportunity to ride him and it's brilliant.
"I thought I was doing a little bit too much everywhere and he was quite keen under me. I hadn't planned to be in front so soon, but it's grand when it works out.
"Henry's team do a fantastic job with the horses at home and Davy Roche, the head man down there, does a lot of work. It's thanks to all the lads at home that make these things happen. I am just the lucky one who gets the leg up on days like today.
"I wish I had the words [to describe the winning feeling] - riding a G1 winner at Cheltenham is just beyond belief. I am so grateful for everyone who has given me the opportunities to do this. You need to be on the right horse at the end of the day and I am the lucky person to be on those horses this week. I really am so delighted.
"I thought the track, the trip and the ground would suit this lad today, and he is a really exciting horse for the future."
Maloney brothers share Minella moment
Minella Indo's owner, Barry Maloney, was at Cheltenham today sharing the winning feelings with his brother Michael.
The two had slipped quietly into the winner's enclosure yesterday, when Monalee was fourth to Frodon in the G1 Ryanair Chase, but today they took centre stage.
Barry said: "We are from Co Dublin, but originally from Mayo. We bought the horse two years ago - he was a point-to-pointer who won a race and was then bought by Henry de Bromhead.
"Over the years we have had a good few horses with Henry, and at present he's looking after three for us, including Monalee. This is our first winner at The Festival and it's unbelievable, the best feeling in the world. We've been trying to experience it for years.
"This is the Olympics of racing, but it is every year."
FLEET OUTGUNNED BY ALLAHO
Trainer Gordon Elliott was pleased with the performance of Commander Of Fleet (4/1) who finished a two-length second to 50/1 shot Minella Indo, ridden by Rachael Blackmore and trained by Henry de Bromhead, in the G1 Albert Bartlett Novices' Hurdle.
Couty Meath handler Elliott said: "Commander Of Fleet has run a nice race.
"He is only five years of age and he was running in a very good race.
"The winner is obviously a good horse, but that looked a good race and we're pleased with the run.
"He is a nice horse to have and we're looking forward to the future with him.
"Jack Kennedy [jockey] gave him a good ride and I just think he got beat by the better horse."
Allaho (8/1), trained by Willie Mullins, was a further seven lengths behind in third. His rider Ruby Walsh remarked: "We were travelling really well, but Allaho just didn't have the hardness when he got a bit empty and got close to the last.
"He stayed on again and was running on again in the last 50 yards, but he doesn't have much experience. He's a gorgeous horse with a huge future.
"They didn't go quick but it's testing ground."
2.50pm Albert Bartlett Novices' Hurdle (Grade 1)
1 Minella Indo (Barry Maloney) Henry de Bromhead IRE 6-11-05 Rachael Blackmore 50/1
2 Commander Of Fleet (Gigginstown House Stud) Gordon Elliott IRE 5-11-05 Jack Kennedy 4/1f
3 Alaho (Cheveley Park Stud) Willie Mullins IRE 5-11-05 Ruby Walsh 8/1
20 ran
Distances: 2, 7
Time: 5m 57.42s
Tote   Win: £129.50           Places: £21.40, £2.20, £3.50 Exacta: £855.30
Henry de Bromhead - 7th winner at The Festival
Rachael Blackmore - 2nd winner at The Festival