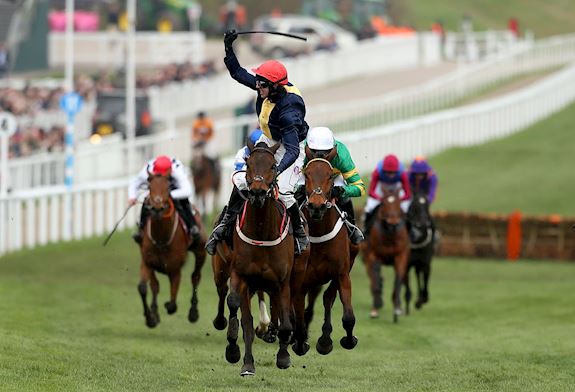 CITY ISLAND A FESTIVAL FIRST FOR RACE SPONSOR MULRYAN AND TRAINER MARTIN BRASSIL
8/1 chance City Island delivered an unforgettable Festival first for Ballymore's founder and chief executive Sean Mulryan and also for trainer Martin Brassil, who plotted a course for the six-year-old which kept him out of the top grade until the day that mattered most.
Mulryan, whose wife Bernadine is the registered owner and described winning as "absolutely brilliant", was thrilled and said: "It's a dream come true. It's my first winner in Cheltenham at The Festival, and to win our own race is very special. This is a magic place, and to win any race here is fantastic. We are very happy."
He added: "Martin is fantastic. He aimed the horse at this race all the season and gave him an easy campaign, so he was very fresh."
Brassil, who won the Randox Health Grand National with Numbersixvalverde in 2006 and trained dual Grade One winner Nickname, but victory here gave him huge satisfaction.
He said: "It's been a long time coming, but you need good horses. I wanted to bring the horse here unbeaten and then I thought we might have a chance of doing something good.
"He's a precocious sort of horse compared to some of those big, strong chasing types, and he'd pleased us every time.
"He was improving as he came along, but whether he was good enough to have his first Graded race in this place we didn't know. It's great to have a Festival winner on the CV. It's wonderful."
He added: "It was a very good performance. I was hoping that he might do something like that, but you never know because a lot of dreams are shattered here and luckily ours weren't.
"I liked him from the first time we did a swinging canter with him. He was weak enough and we gave him time. He had his first run at the Punchestown festival, when he was second in a bumper, and won a couple of weeks later.
"Sean likes to go to meetings like Galway and Listowel, so we put him by for Galway, when he won his maiden hurdle, but subsequently lost it. He went to Leopardstown at Christmas for a stiffer test and I ran him back over two miles just to sharpen the pencil for here and he won again.
"Then he won a novice at Naas, which left him spot on for here - we were hoping that it did anyway. The only anxious moment was running down to the second last, when he got a little bit tight, but he got himself out of it and he battled it out well from the last.
"This is the Olympics of National hunt racing and it's all championship stuff."
WALSH IS A CITY-SLICKER
Mark Walsh rode his second Grade One winner at the 2019 Festival™ when partnering City Island to victory in the G1 Ballymore Novices' Hurdle.
The victory complemented Walsh's win on Espoir D'Allen in yesterday's G1 Unibet Champion Hurdle, as he and City Island (8/1) pulled away to win by two lengths from Champ (9/2) with Bright Forecast (25/1) a further two and a quarter lengths adrift in third.
Walsh said of the Martin Brassil-trained winner: "They went a good gallop and I was happy with my position the whole way. I got into a nice little position coming down to the third-last hurdle, and while it became a little bit rough at that point I got a nice run through to the second-last and he went on up the hill."
Reflecting on that incident after the third-last, when six horses were more or less level for the lead, Walsh said: "Bryan [Cooper, on Sam's Profile] was half a length up on me and wanted a bit more room and for a moment I was the meat in a sandwich. It didn't cost me as I still won the race, and it's just race-riding.
"We had gone a good gallop and it was his first Grade One race. I didn't want to put him in the race too early, so took my time early in mid-division. Once I got into the clear he proved very game and put his head down and galloped to the line.
"I don't think he's quick enough for a Champion Hurdle, but he will definitely stay three miles and I can see him being a possible Stayers' Hurdle type. He's a chaser for the future.
"Things are going well and hopefully I can bag a few more winners before the week's out."
1.30pm Ballymore Novices' Hurdle (Grade 1) £125,000
1 City Island (Bernardine Mulryan) Martin Brassil IRE 6-11-07 Mark Walsh 8/1
2 Champ (J P McManus) Nicky Henderson 7-11-07 Barry Geraghty 9/2
3 Bright Forecast (The Aldaniti Partnership) Ben Pauling 5-11-07 Nico de Boinville 25/1
3/1 fav Battleoverdoyen (PU)
16 ran
Distances: 2, 2¼
Time: 5m 6.03s
Tote Win: £9.00       Places: £2.90, £2.10, £7.40   Exacta: £54.20
Martin Brassil - 1st winner at The Festival
Mark Walsh - 3rd winner at The Festival 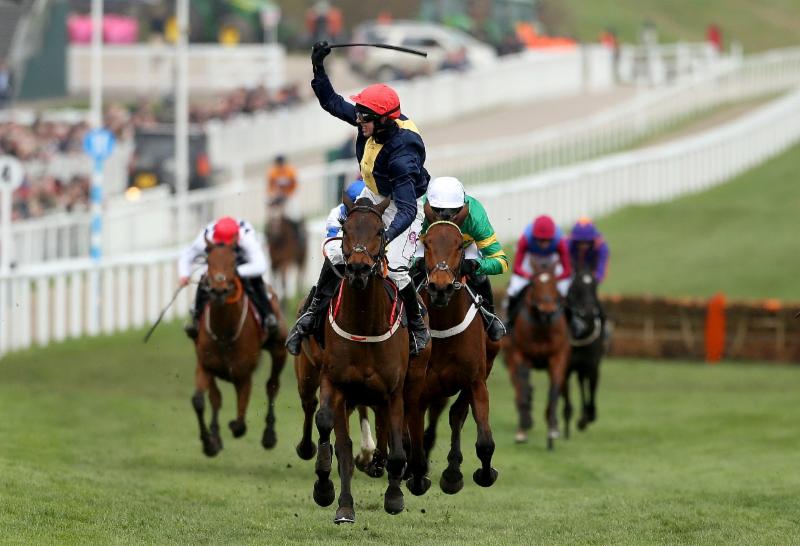 CHAMP IS BEATEN
Nicky Henderson looked deflated after the well-fancied Champ, who appeared to be cruising coming round the final bend into the finishing straight, took second place in the G1 Ballymore Novices' Hurdle. The J P McManus-owned seven-year-old, who is named after the former multiple champion jockey Sir A P McCoy, finished two lengths behind the Martin Brassil-trained 8/1 winner, City Island, at 9/2.
"He's run a good race and travelled very well," said Henderson. "He did nothing wrong. He was a bit keen at times but jumped well. He could go again; that was only his third run of the year."
Ben Pauling, hoarse from celebrating his victory with Le Breuil in yesterday's National Hunt Chase, was delighted with Bright Forecast's third place at 25/1. He finished two and a quarter lengths behind Champ under Nico de Boinville.
Pauling said: "He looked a bit outpaced early doors. They've gone a right gallop and he's stayed every yard of the [two-mile, five-furlong] trip. It was a super ride from Nico. The horse was absolutely flying at the death and he's going to be a very exciting one for the future.
"He's just a shell of a horse at the moment. This is only his fourth start under Rules; it's not bad really."
De Boinville added: "He's run a great race. He made up plenty of ground in the closing stages.
"We were hoping he could finish in the places, so to achieve that is brilliant."
GOING AFTER THE FIRST
Mark Walsh, partner of the 8/1, two-length winner City Island, said: "Dead and tacky going."
Barry Geraghty, jockey of second-placed 9/2 chance Champ, said: "Dead."
Nico De Boinville, partner of the third Bright Forecast (25/1), said: "Dead and tacky."
Richard Johnson, on board fourth home Brewin'upastorm, said: "Soft and tacky."
Sean Bowen, on Ask Dillon, said: "It is soft and tacky."
Jack Kennedy, rider of Battleoverdoyen, said: "Dead and tacky."
Paul Townend, rider of Castlebawn West, said: "Dead."
David Mullins, on board Dunvegan, said: "Soft."
Davy Russell, rider of Galvin, said: "We would call it tacky."
Paddy Brennan, partner of Jarveys Plate, said: "Soft and holding."
Rachael Blackmore, on board Notebook, said: "Tacky."
Bryan Cooper, partner of Sams Profile, said: "Dead."
Noel Fehily, jockey of Seddon, said: "Dead and tacky."
Sean Flanagan, rider of Valdieu, said: "Dead."