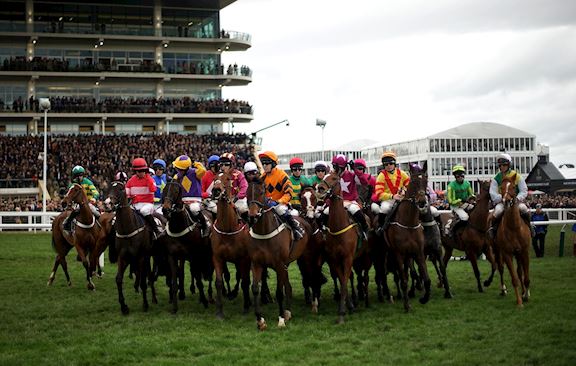 Anibale Fly is becoming some bridesmaid.
He finished runner-up in today's £625,000 G1 Magners Cheltenham Gold Cup, complementing a third place in last year's race, plus a valiant fourth in the Randox Health Grand National. Trained by Tony Martin for owner J P McManus, Anibale Fly (22/1) crossed the line two and a half lengths behind winner Al Boum Photo (12/1) and three and three-quarters ahead of Bristol De Mai (18/1). Native River (6/1), last year's winner, finished fourth.
Martin said: "I'm delighted with him. He put up a lovely run on his previous start and we were confident he would go well today, and he did. Things didn't go so well for him early in the race, and you couldn't be happy watching it.
"He then got a lovely position coming around the bend and I was hopeful from there. He relishes the trip, he loves the hill and he ran on well at the finish.
"I'll get him home and talk to the lads that look after him, and to Frank Berry and J P and we'll make a plan, but he's in everywhere, including Aintree and Punchestown."
Barry Geraghty, who rode Anibale Fly, said: "Anibale Fly has run a great race. He stayed and stayed and kept on finding for me. However, he was just beaten by a better one on the day - I'm delighted with him."
Nigel Twiston-Davies, the trainer of third-placed Bristol De Mai, said: "The experts are the experts and I haven't got a clue why they are experts. He was the joint top-rated horse in the race and he got beat, so maybe we shouldn't have run him!
"When he ran in this race two years ago, we had trouble with him beforehand, but we have had no trouble this year.
"The only problem is the horses that we beat at Haydock, we beat again. So maybe the first two might come over to Haydock and we might be in trouble."
Daryl Jacob, who rode Bristol De Mai, said: "It's been a tough week and it hasn't really happened [for me], but I'm very proud of the horse."
Tizzard not blinkered by future plans
Colin Tizzard is considering changing head gear on Native River following the horse's run when fourth in the Magners Cheltenham Gold Cup.
Jockey Richard Johnson had to work hard to get into a front-running position, and while he shook off his rival for that role, Might Bite - who pulled up - he was unable to hold off the challenge of the first three in the home straight.
Tizzard, who also ran Elegant Escape (sixth) and Thistlecrack (pulled up), said of Native River: "They went fast and he couldn't lie up. No disrespect to the horse, but he improved when we put cheekpieces on a couple of years ago, and he might need something else now to get him to travel a little better. That's not being detrimental to him, but he might need blinkers to stop him worrying about what's going on behind.
"He stayed on up the run-in, but you cannot push a horse for three and a quarter miles - you want to be able to sit up occasionally and blinkers might do it.
"Elegant Escape was sixth and ran a massive trial for the Grand National, but I haven't spoken to Tom Scu yet about Thistlecrack."
Richard Johnson, who rode Native River, said: "He was very slow getting out of the gate and I have had to really niggle and cajole him to get him up there. To be fair, then he got into a nice rhythm but was always asking me to ask him to do things.
"He has stayed on again after the second last and got back up to get fourth on the run-in, so he has still run a very good race. It's a Gold Cup and he has been beaten by three top-class horses. All the ones we thought we had to beat were behind him.
"He has done nothing wrong. It's not quite as good as last year but another good run. I just think he wasn't quite on his game and, in a Gold Cup you need to be 200 per cent. He has still run a good race, but unfortunately it is not to be."