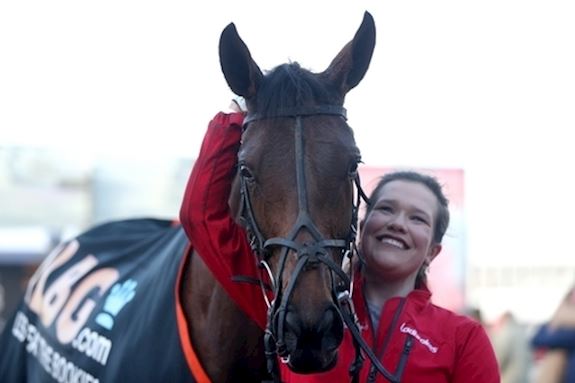 ROKSANA IS THE MAIN MARE
The Dan Skelton-trained Roksana (10/1) benefited from the final-flight fall of 10/11 favourite Benie Des Dieux, trained by Willie Mullins, to land the G1 OLBG Mares' Hurdle.
Ridden by his brother Harry, the seven-year-old daughter of Dubai Destination kept on gamely up the Cheltenham hill to score by two and a half-lengths from Benie Des Dieux's stable companions Stormy Ireland (7/1) and Good Thyne Tara (25/1), who was a further two lengths back in third.
Winning jockey Skelton, recording his second victory at The Festival overall, said: "Obviously I am the beneficiary of what happened - that's Jump racing. You are never home until you jump the last and luck has been on our side today. I hope Ruby and Benie Des Dieux are up OK.
"It is our first G1 winner and she is a good mare in her own right. You have to take days like these.
"It means the world to have a winner here. Nobody is afraid of saying that these are the four days when it really, really matters.
"We have a long old year and this is what you work for. This is why I do it, for days like this. I have a dream job and am in a very lucky position.
"Fair play to Dan as he decided to stick to the plan in running here. He has always believed in Roksana and so have the rest of the team.
"She has stepped forward from her previous run. We're absolutely delighted and it means an awful lot."
Benie Des Dieux was reported to be fine after her fall at the last.
4.10pm OLBG Mares' Hurdle (Grade 1) 2m 3f 200y
1 Roksana (Sarah Faulks) Dan Skelton 7-11-05 Harry Skelton 10/1
2 Stormy Ireland (Sullivan Bloodstock Ltd) Willie Mullins IRE 5-11-05 7/1
3 Good Thyne Tara (N King) Willie Mullins IRE 9-11-05 Rachael Blackmore 25/1
10/11 fav Benie Des Dieux (Fell)
14 ran
Distances: 2¼, 2
Time: 5m 0.26s
Tote Win: £9.80 Places: £2.10, £2.50, £6.50 Exacta: £87.40
Dan Skelton - 3rd winner at The Festival
Harry Skelton - 2nd winner at The Festival
ROKSANA GIVES SKELTON A 'MAGIC DAY'
Roksana's victory in the G1 OLBG Mares' Hurdle gave trainer Dan Skelton a third Festival success - and a first in a Grade One race. The Dubai Destination seven-year-old mare, a 10/1 chance, beat Stormy Island by two and a quarter lengths. She was ridden by Skelton's brother Harry.
Benie Des Dieux, the 10/11 favourite and last year's winner, fell at the final flight of hurdles when in the lead.
Dan Skelton said: "It's been a great team effort. Sarah Faulks, who owns her, is an owner-breeder and the mare will have a home for life. We hope we get plenty of her foals and that they come back here. Sarah's a real stalwart of National Hunt breeding. It's an amazing feeling. I thought I was past all that youthful stupidity and excitement, but last night I honestly felt like a kid at Christmas. I thought we had a great team coming here in great form, and Harry is riding brilliantly, the whole team at home are doing everything right, and I just got that warm feeling last night you don't often get, that buzz. I didn't tell anybody because I didn't want to be an optimistic fool, but they are in great form. It's a magic day - to win on Tuesday just sets your week up.
"I've got a lot of respect for Ruby [Walsh, who rode Benie Des Dieux] and he taught me so much when I was assistant trainer to Paul Nicholls. He'll get up, dust himself off and go again for the rest of the week. That's racing. But we'd have got a lot of credit if we'd finished second in that race - it took a real hard mare. She wandered off across the track when she got left in front after Benie Des Dieux's fall, but Harry was super on her the whole way. She had to be nimble.
"We got her unraced, and started in bumpers - it's been a full team effort from the start. She was second to Santini last year at Aintree and has just got better and better. We planned this race - I said to Sarah that this was the race we wanted to be going for. One run and go there. What gave me a lot of confidence was Native River [last year's Magners Cheltenham Gold Cup winner] - one run and he wins the Gold Cup, so it can be done."
ROKSANA'S OWNER PAYS TRIBUTE TO SKELTON
Roksana, winner of the G1 OLBG Mares' Hurdle at 10/1 for trainer Dan Skelton and his jockey brother Harry, is owned by Sarah Faulks, for whom it was a first winner at The Festival™ sponsored by Magners.
Faulks said: "It was really exciting. It's a fantastic tribute to Dan and the team who have done such a good job. They leave no stone unturned and it has all come together today. You've got to jump the fences, and we were the lucky beneficiary at the last [when favourite Benie Des Dieux, trained by Willie Mullins and ridden by Ruby Walsh, fell].
"Dan found hher for me as a broodmare, but when he found her he said, 'I've found you a broodmare, but the trouble is that she hasn't run yet!' She's got fantastic black type. He said, 'I guarantee you I'll get black type.'"
"What happens next will depend on Dan. Maybe she will go to the paddocks next year; she doesn't need to prove much, but I think Dan and my husband might want her to go on racing, I'm not sure." 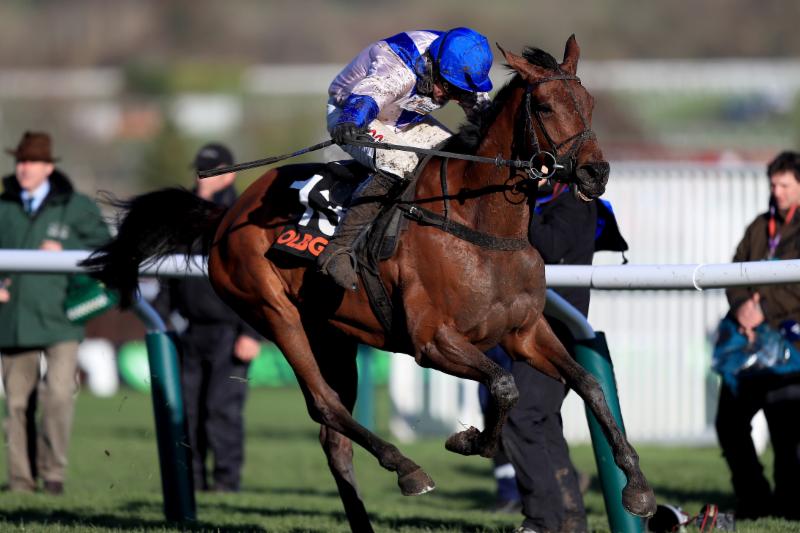 YOU COULDN'T MAKE IT UP AS MULLINS HOTPOT FALLS AGAIN WHEN IN COMMAND AT THE LAST
History repeated itself when 10/11 chance Benie Des Dieux fell at the last when around four lengths clear and in complete command in the G1 OLBG Mares' Hurdle, just as her stable-mate Annie Power had done in identical circumstances in the same race four years ago, when also partnered by Ruby Walsh for owner Rich Ricci.
In 2015 Annie Power's fall saved bookmakers from an estimated £50-million payout, as she was the last leg of a widely predicted Willie Mullins first-day four-timer that had been heavily promoted to punters.
Benie Des Dieux, who won last year's Mares' Hurdle, will also have featured in many multiples, for Walsh had been saying for weeks that she was his best chance of the entire meeting.
Fortunately both horse and jockey were soon on their feet and seemingly none the worse for the experience.
Ricci, who has had plenty of unfavourable press following last week's closure of bookmaker BetBright, of which he was chairman, said: "It has been a very difficult week, but the horse is great and Ruby is fine, which is the most important thing.
"I don't want the trolls to attack Ruby. He is the best jockey in the world and it happens. I just hope he is protected from the same nonsense he got the last day.
"Benie Des Dieux was going very well and she is a very good mare. We will mind her, bring her back and she will win again, but I am just so sorry and it's just difficult.
"Her getting up is the most important thing and that's what we have to remember. This game is tough and I take a lot and I'm tough. The fact that she got up should make everybody happy.
"I am sorry for people who punted her and I know that I will get stick for that as well, but it just doesn't matter - if she's up, that's fine. It's just heart-breaking, but she's up and that's the most important thing. It could be worse.
"I just watched the replay. It's tough and I don't know what to say. It has been a difficult week."
Benie Des Dieux had traded at 1.03 (1/33) in running on Betfair prior to her fall.