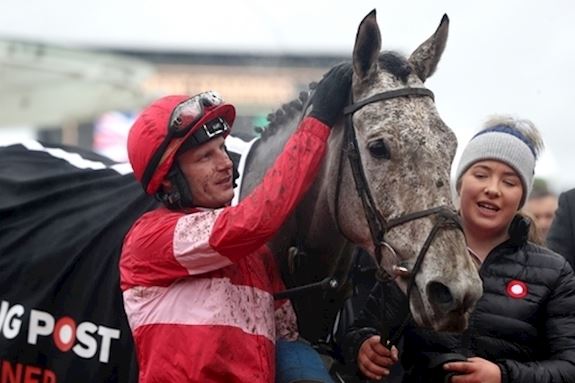 A DUCAL WINNER FOR MULLINS
Willie Mullins could not have had a better start to The Festival™ sponsored by Bulmers - the Irish trainer followed up his G1 Sky Bet Supreme Novices' Hurdle success with victory in the Racing Post Arkle Novices' Chase, courtesy of the Paul Townend-ridden Duc Des Genievres. The 41/1 double took his total of Festival winners to 63, and his Racing Post Arkle tally to four (2015, 2016, 2018 and 2019).
The French-bred six-year-old Duc Des Genievres won by a very comfortable 13 lengths at odds of 5/1 from Us And Them.
Mullins said: "Obviously this rain has just come in time. I was moaning at 10am that nothing had come - there was a lot of wind last night but no rain. It has just worked the oracle for this horse and made a huge difference to him.
"Looking at Paul, once the two horses fell going away from the stands, I thought, 'why are you going out wide?', but he must have seen something I didn't see. Next thing there was a bit of a shemozzle and he ended up in third place, when I thought he was going to be out the back. He just kept him together from thereonin and he just jumped and did everything right for him.
"It feels very good, considering where I thought I was two or three weeks ago, looking at the string and going round our ground and horses we had tried to get runs into and couldn't. It looks like we've got two nice horses there anyway, and a few to come - and some nice ones at home that we never got out.
"It's very early days at the Cheltenham Festival but it's fantastic to have two winners by this stage. There's a lot more to happen over the next four days, though.
"Duc De Genievres showed a good bit as a novice hurdler but then went off form a bit. When he came back in this season, we thought maybe he was going to be a disappointing horse, but I think it was just the firm and good ground we had back home in Ireland. He was a different racehorse on this ground today.
"It was a big step up in class the last day [he won a beginner's chase at Gowran Park in February] but I didn't that it would be good enough to win here - I thought he would have to improve again and I think he did.
"He seemed to be travelling so well and I said that he would have a great chance if he just kept jumping. He did that and seemed to really like that ground. It's nice to get a winner for [owner] Jared Sullivan here.
"It looked like a schooling session for Paul, to be honest. He just held his position from the top of the hill, kept jumping and motored away up the hill.
"It's a fantastic start for anyone and I didn't dream that we could do that. I was hoping that the first one would go close but I didn't think this fellow could - I thought he had an each-way chance."
TOWNEND IN DREAMLAND AS 'ELECTRIC' DUC DES GENIEVRES GIVES HIM FIRST ARKLE
Paul Townend could scarcely believe the run he enjoyed on 5/1 chance Duc Des GenIevres, his first winner of the race when coming home 13 lengths clear in the G1 Racing Post Arkle .
Townend, enjoying a ninth Festival success, said: "I got a dream run around. He really put it together the last day, when he was impressive, and thankfully he put it together again today. He handled the ground very well, as he did the last time, and it surprised me how well I was going at the top of hill. At least he kept going and was foot perfect."
He added: "His jumping was electric. There was a lot of pace on paper and I was undoubtedly planning on leaving them to it, but this horse travelled so well and jumped his way there. I was able to take him back coming down the hill, which you can't do very often around here.
"I don't have the vocabulary to describe Willie Mullins but year on year, he produces them here in some order and fair play to him. It is a privilege to work for him."
Owner Jared Sullivan, who also has Laurina in the Unibet Champion Hurdle, was enjoying a fifth success at Cheltenham but could not choose between his winners.
He said: "That was great. That's my fifth winner here and they are all great - they are hard enough to get, that's for sure.
"He looked like he was going to win from the top of the hill. Paul said he was tanking all of the way. Hopefully, Laurina will win too - you never know - and then I've got Stormy Island in the Mares' and one in the four-miler. We'll see."
2.10pm Racing Post Arkle Novices' Chase (Grade 1) 1m 7f 199y
1 Duc Des Genievres (Sullivan Bloodstock Limited) Willie Mullins IRE 6-11-04 Paul Townend 5/1
2 Us And Them (Burnham P & D ltd) Joseph O'Brien IRE 6-11-04 J J Slevin 14/1
3 Articulum (Martin McDonagh & Paul Murphy & M Nixon) Terence O'Brien IRE 9-11-04 David Mullins 25/1
100/30 fav Hardline (7th)
12 ran
Distances: 13, 3¾
Tote Win: £5.10       Places: £2.10, £3.10, £8.30 Exacta: £70.70
Willie Mullins - 63rd winner at The Festival
Paul Townend - 9th winner at The Festival 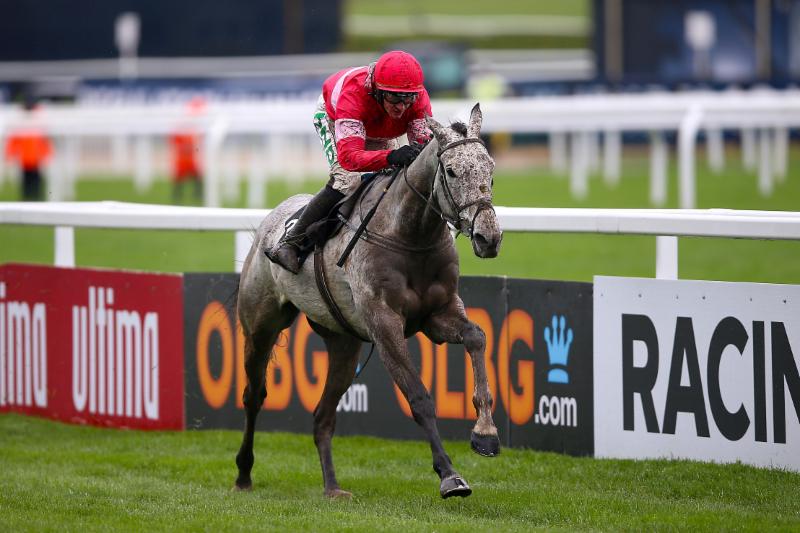 US AND THEM PUTS OWNER ON HIGH
The bird had flown, but 14/1 chance Us And Them stayed on up Cheltenham's hill to take second place in the G1 Racing Post Arkle Challenge Trophy.
The Joseph O'Brien-trained six-year-old was beaten 13 lengths by the Willie Mullins-trained winner Duc Des Genievres (5/1), and finished three and three-quarters of a length ahead of third-placed Articulum, a 25/1 shot.
Burnham-on-Sea-based John Spence, managing director of plastering and dry-lining specialists Burnham P & D Ltd , the owner of Us And Them, said: "Tom O'Brien [the jockey] is a good mate of mine and related to Joseph O'Brien. He told me there was a nice horse for sale in Ireland, so we went over them and bought him.
"We have horses with a number of trainers in Britain, but we've had a lot of ordinary types, selling platers and so on. It's a thrill to have one this good. Now we want to go to Aintree and Punchestown."
Cork-based Terence O'Brien had not had a runner at The Festival, so Articulum's third place was a tremendous start. O'Brien said: "I've had a runner at the November meeting, but I'm thrilled with this. Willie Mullins' horses are running out of their skins at the moment and the winner was so good there was no second, but that won't stop us enjoying the moment.
"Our horse won a maiden hurdle by 30 lengths just over a year ago and at that point I said we might have a Cheltenham horse. Then he disappointed in a few runs, but lately has been back to form, finishing second to Getabird at Punchestown and then won at Naas so he's been mixing with nice horses.
"David [Mullins, jockey] was mentioning a race over two and a half miles at Aintree and we might go for that but today was the target."
Ciaran Gethings had never ridden in a G1 race, and was delighted to finish fourth on the Tom George-trained Clondaw Castle. He said: "He ran a blinder. The winner pulled away in the home straight and I just got a bit lonely after the second-last. Two horses came past and did me, but if I'd had company all the way up the hill I might have been a good second.
"Until we started sweeping around the final bend I was thinking we were matching the winner, but he went away. That was my first ride in a G1 race and it's super to be a part of it."
US AND THEM NO MATCH FOR THE DUC IN ARKLE
J J Slevin was magnanimous in defeat following 14/1 shot Us And Them's second-placed finish in the £175,000 G1 Racing Post Arkle Novices' Chase to the impressive Duc Des Genievres (5/1), who provided Willie Mullins with a quick-fire 41/1 double on day one of The Festival™ presented by Bulmers.
Us And Them stayed on steadily in the closing stages past beaten rivals to fill the runner-up position and Slevin said: "Us And Them has run a good race. He jumped well throughout the race in the main despite a couple of messy leaps early on.
"The ground is getting very testing, but he stayed on nicely, but was no match for the winner - it was a good run."
25/1 chance Articulum, trained by Terence O'Brien, shaped well throughout the two-mile event and finished a creditable third, three and three-quarter lengths behind Us And Them.
Jockey David Mullins commented: "Articulum has run a great race. He ran very well for a long way and jumped brilliantly - I'm delighted with him."