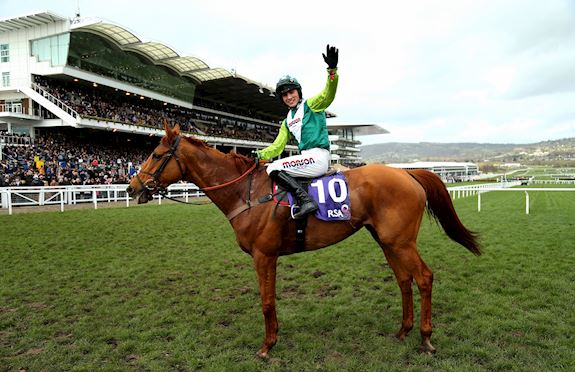 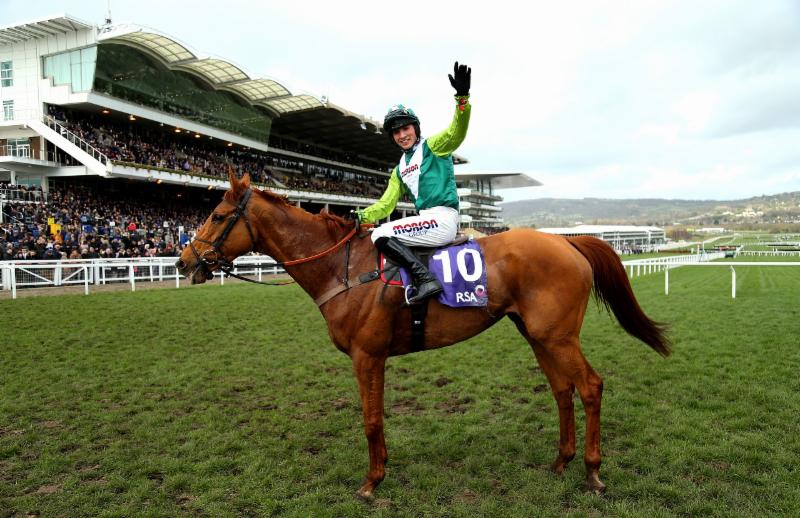 SANTINI RUNS SO WELL AFTER FOOT ISSUES
Britain pulled a one-two back on Ireland in the 888 Prestbury Cup when the Paul Nicholls-trained Topofthegame held off a sustained bid from Santini, representing Nicky Henderson's stable, in the G1 RSA Novices' Chase.
That took the score between the two countries to 5 - 4 in Ireland's favour.
Santini (3/1) has been suffering from some well-publicised foot problems since pulling a shoe off in a work session at Newbury ten days ago, and he lost the same shoe during today's race, in which he finished half a length behind the 4/1 winner. A further length and three-quarters behind was Delta Work (15/8f).
Henderson said of Santini: "It's been a very long 10 days, but we got here, and that was thanks to everybody who did a brilliant job at home. We have no excuses, but it's not been easy and it's not been an ideal preparation.
"After the Feltham [in which Santini finished second, one place behind Topofthegame] we all said these are the two horses who could be for the RSA. He's a lovely big horse and his life is in front of him."
Nico De Boinville: "He's run well, jumped well and did everything right. I'm pleased with that."
ELLIOTT'S SPIRITS LIFTED BY DELTA WORK'S FINE THIRD
Gordon Elliott had a disappointing first day at Cheltenham, and saw the strongly-fancied Battleoverdoyen (3/1 favourite) pulled up in the opening race of day two, but his spirits were lifted considerably by the close third behind two market rivals of Delta Work (15/8 favourite) in the G1 RSA Insurance Novices' Chase.
Elliott, who has topped the trainers' table at the last two Festivals, said: "We are in the winner's enclosure after a rough week, so it feels like a winner just getting in here. It's a long week though and we'll keep our heads up and keep going.
"He's a nice horse and he didn't disgrace himself."
This looked a particularly hot RSA Chase and jockey Davy Russell agreed.
Russell, who was top jockey at last year's Festival but is still awaiting his first winner of 2019, said: "It was a competitive race and the main protagonists battled it out. His jumping was a bit sloppy at times, but he's still a novice and there's plenty of time to work on it."
Colin Tizzard was delighted with fourth-placed Mister Malarky, who has improved no end this season. He said: "He's a stayer and has improved massively over the season. It's almost unbelievable what he's doing now compared to what he was doing last season.
"He's got great wind and he stayed on behind some very good horses. He beat some good horses too. We are happy to be in the winner's enclosure after a very good RSA. Robbie (Power) thought he'd improved from Ascot, and I think so too."
GOING CHANGE
The going changed before the first race to Soft, Good to Soft in places (from Soft)