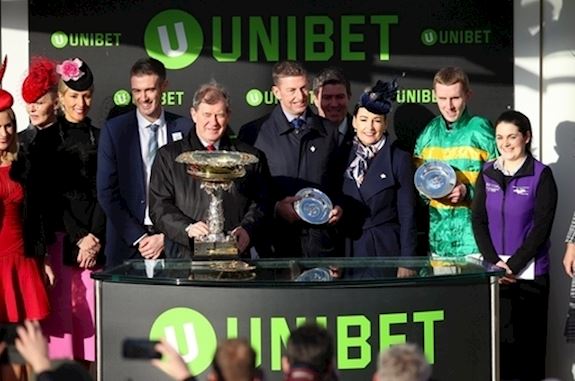 NOTHING CAVALIER ABOUT QUIETLY-SPOKEN CROMWELL
If Gavin Cromwell felt like shouting from the rooftops that he had just trained his first winner at The Festival™, and in no less a race than the £450,000 G1 Unibet Champion Hurdle, he was going to say it quietly.
The softly-spoken farrier, who now combines shoeing horses with training a 50-horse string, sent out Espoir D'Allen (16/1) to land Europe's greatest hurdle race, and the gelding did it in style, becoming the first five-year-old to land the prize since Katchit in 2008 - you have to go back to 1985, and See You Then, to find the next winner of such youth.
Espoir D'Allen, who carried the colours of J P McManus, and was ridden by Mark Walsh, scored by 15 lengths and a neck from last year's runner-up Melon (20/1) and outsider Silver Streak (80/1). Remarkably, the three horses who headed the market, failed to make the places - dual winner Buveur D'Air fell at the third, Laurina was fourth and Apple's Jade (7/4f) sixth.
They may be back next year, but Paddy Power reckons Espoir D'Allen is the new kid on the block, and make him a 5/1 chance to repeat his win in 2020.
County Meath-based Cromwell, who sounded a sad note when revealing his mother had passed away in November, said: "I am lost for words. Espoir D'Allen is French-bred and they do mature earlier. He has been winning G3s this season, so to go and do that is fantastic. He wouldn't stand out in the string on his work, but he's a gorgeous-looking horse.
"I have three horses for J P McManus and about 50 in total, but not many graded horses.
"Charlie Swan [who won three Unibet Champion Hurdles on Istabraq for McManus] found the horse in France and he came to me after winning a juvenile bumper over there. I had a call from J P's team to say I had a horse coming to me in a couple of weeks, and it was this one. J P has been very good to me and sent me Jer's Girl, who won a couple of Grade One races - it's great to be able to repay him.
"I started training a few point-to-pointers and enjoyed it, and it went from there. We'll still do a little bit of farriery because it's the only way to make it pay. You need [to train] 145 horses otherwise. The game is full of talented trainers and better trainers than me - right the way through from the point-to-point ranks to the top of the game there are some brilliant trainers in Ireland."
ESPOIR D'ALLEN REIGNS SUPREME IN CHAMPION HURDLE
The Gavin Cromwell-trained Espoir D'Allen ran out a shock 16/1 winner of the feature race on Champion Day at The Festival™ presented by Magners, the £450,000 G1 Unibet Champion Hurdle.
The five-year-old son of Voix Du Nord travelled menacingly into contention approaching the turn for home and ran on strongly in the home straight, producing a superb leap at the last to register a bloodless 15-length success under Mark Walsh, registering his second victory at The Festival overall.
The Willie Mullins-trained Melon (20/1) was back in second with a neck back to 80/1 shot Silver Streak, trained by Evan Williams in third.
In a race full of drama, favourite Apple's Jade (7/4f) was sixth, defending champion Buveur D'Air (11/4) fell at the third hurdle and Laurina (5/2) could only finish fourth.
Winning rider Walsh commented: "Everything went well for me on Espoir D'Allen. When Buveur D'Air fell at the third hurdle, I luckily avoided the fall and got a lovely run through the whole way.
"For a five-year-old to do that against what we thought was one of the best Champion Hurdles run in the past few years, he is a right little horse. It is unbelievable.
"He is the first five-year-old since Katchit to win the race and hopefully there will be a few more Champion Hurdles in him yet.
"He travelled very strongly and he gave me a dream ride. Espoir D'Allen very uncomplicated and we were delighted when we saw the rain come this morning as he travels a lot better in this slower ground.
"Me and Gavin spoke before the race and the plan was to ride him for a place - we got a place, it was first place!
"I was in front soon enough and I heard a horse coming but only realised after the last that it was a loose horse [Buveur D'Air].
"This win will take a while to sink in. It's back to work now but it was brilliant to land this event."
Winning owner J P McManus was recording an eighth victory in the Champion Hurdle and this was his 55th success at The Festival in total.
Discussing the winner and Buveur D'Air's third-flight fall, McManus commented: "It's great to win another Champion Hurdle. I am thrilled for Gavin and Mark. It is a big moment for them.
"It was disappointing to see Buveur D'Air fall, but that was his own making. It is of course still very nice to win the race with Espoir D'Allen.
"Any time you win the Champion Hurdle you have to enjoy it." 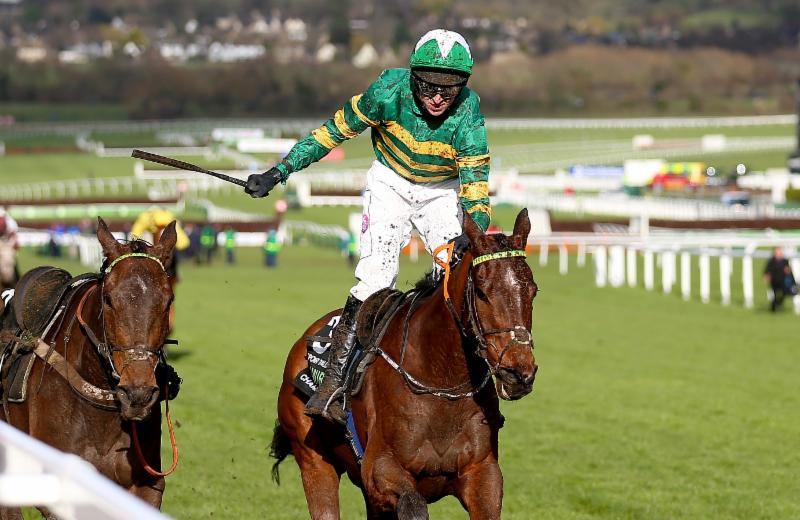 MELON DELIGHTS MULLINS BUT LAURINA NEVER GOING WELL ENOUGH
Willie Mullins and jockey Paul Townend were both delighted when last year's runner up Melon (20/1) returned to form to finish second again in the G1 Unibet Champion Hurdle, but neither Mullins nor jockey Ruby Walsh were ever entirely happy with the better-fancied Laurina (5/2 second favourite), who had every chance coming down the hill but faded into fourth.
Mullins said: "I thought after jumping three hurdles that Laurina wasn't firing as Ruby should have been taking a pull out of her and he wasn't, but that's probably the best run of Melon's life, so they are the tactics we'll use in future."
Walsh confirmed: "I was never happy, but I couldn't tell you what the problem might have been. She just didn't run a race."
Townend said: "Melon ran a cracker and has found a bit of form again."
The pair were separated by the Evan Williams-trained Silver Streak (80/1), who has worked his way through the ranks and excelled himself in third.
Williams was thrilled and said: "I'm genuinely shocked. I would have run him in the Kingwell rather than here.
"I didn't think we could be third so we are more than delighted. It's a fairytale and it's great for Mr and Mrs Fell and their family. It's fantastic that he's justified him coming here.
"He's come such a long way. He was running off only 96 when he won a handicap hurdle at Taunton two seasons ago."
Jockey Adam Wedge added: "That was fantastic. He's run a mighty race and for a moment I thought we were going to get second."
HENDERSON TAKES DEFEAT ON THE CHIN
Trainer Nicky Henderson was philosophical after Buveur D'Air, winner of the £450,000 G1Unibet Champion Hurdle for the past two years, fell in the early stages of this year's race, at the third hurdle. The J P McManus-owned eight-year-old, sent off at 11/4, quickly got up and continued to race without his jockey, Barry Geraghty, and actually passed the winning post only half a length behind the winner, Espoir D'Allen, also owned by McManus. If Buveur D'Air had won, it would have been Henderson's eighth victory in the Unibet Champion Hurdle.
Henderson said: "He seems fine. Actually he nearly won the race but unfortunately there's a rule that says you have to have a jockey on top.
"We all have to take these things on the chin. You have a winner and then you are back to square one again.
"In his hurdling there is such a fine margin over the hurdles, an inch every time and you only have to get it wrong by half an inch. If you are so slick and accurate you are dangerously low [over the hurdles] and the margin for error will always be there. He was an inch lower than he should have been I guess, I don't know - I'd have to see it again.
"Well done J P - I'm delighted he won it anyway. He must have felt the same way as I did when Buveur D'Air fell, but he had still got one in the race [Espoir D'Allen] and I had two [Brain Power, pulled up by Nico de Boinville, and Verdana Blue, fifth under Davy Russell]. That's the reason you run two in a race. It's sad because Buveur D'Air seemed in such good form, but there you go.
"Verdana Blue has run remarkably well considering the ground. Brain Power - it's the ground again really as the third horse was behind us in the Unibet International Hurdle [at Cheltenham in December]. If you don't go in it, you don't go in it and I am afraid it's the way it's going to go this week."
3:30pm Unibet Champion Hurdle Challenge Trophy (Grade 1)
2m 87y £450,000
1 Espoir d'Allen (FR) 5 11 10 Gavin Cromwell Ireland Mr John P. McManus Mark Walsh 16/1
2 Melon p 7 11 10 Willie Mullins Ireland Mrs J. Donnelly Paul Townend 20/1
3 Silver Streak (IRE) 6 11 10 Evan Williams Mr L. Fell Adam Wedge 80/1
4 Laurina (FR) 6 11 3 Willie Mullins Ireland Sullivan Bloodstock Limited Ruby Walsh 5/2
5 Verdana Blue (IRE) 7 11 3 Nicky Henderson Crimbourne Stud Davy Russell 33/1
6 Apple's Jade (FR) ts 7 11 3 Gordon Elliott Ireland Gigginstown House Stud Jack Kennedy 7/4 Fav
7 Global Citizen (IRE) 7 11 10 Ben Pauling The Megsons David Bass 50/1
PU Brain Power (IRE) p 8 11 10 Nicky Henderson Mr Michael Buckley Nico de Boinville 33/1
FELL 3rd Buveur d'Air (FR) 8 11 10 Nicky Henderson Mr John P. McManus Barry Geraghty 11/4
BD 3rd Sharjah (FR) 6 11 10 Willie Mullins Ireland Mrs S. Ricci Mr Patrick Mullins 20/1
Time: 3m 59.07s
Distances: 15, nk, 1½, 7, 6, 45
Breeder: Bruno Vagne
Breeding: 5 b g Voix Du Nord (FR) - Quadanse (FR) (Maille Pistol)
Tote Win: £22.30 Places: £3.30 £2.80 £7.30 Exacta: £277.60
Gavin Cromwell - 1st winner at The Festival
Mark Walsh - 2nd winner at The Festival
J P McManus - 55th winner at The Festival
Eighth Unibet Champion for owner J P McManus following Istabraq (1998, 1999, 2000), Binocular (2010), Jezki (2014), Buveur d'Air (2017, 2018)
Third Race Result
2.50pm Ultima Handicap Chase (Grade 3) 3m 1f
1 Beware The Bear (G Barlow) Nicky Henderson 9-11-08 Jerry McGrath 10/1
2 Vintage Clouds (Trevor Hemmings) Sue Smith 9-11-01 Danny Cook 16/1
3 Lake View Lad (Trevor Hemmings) Nick Alexander 9-11-12 Henry Brooke 25/1
4 Big River (Two Black Labs) Lucinda Russell 9-10-11 Derek Fox 28/1
8/1 co-fav Up For Review (8th), Mister Whitaker (Pulled up), Give Me A Copper (Fell)
24 ran
Distances: 1¼, 2, 3¼ Time: 6m 39.02s
Tote Win: £11.00      Places: £2.50, £4.10, £5.20, £7.50  Exacta: £176.80
Nicky Henderson - 61st winner at The Festival
Jerry McGrath - 2nd winner at The Festival