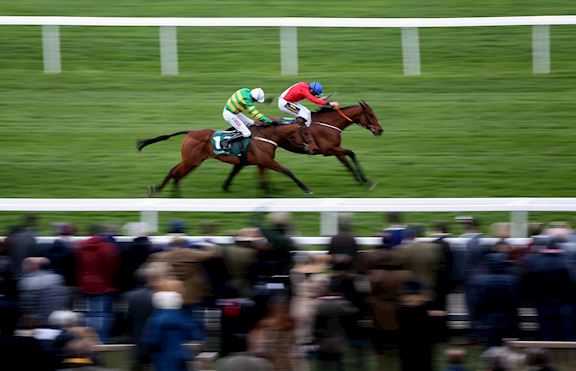 ENVOI ALLEN JUSTIFIES THE HYPE
Envoi Allen came into the The Festival™ presented by Magners with an unbeaten record, a lofty reputation and a £400,000 price tag, but he justified the hype with a game performance to land the £75,000 G1 Weatherbys Champion Bumper.
Ridden by amateur Jamie Codd, the five-year-old son of Muhtathir travelled with menace throughout the two-mile event and hit the front entering the home straight.
Envoi Allen responded willing to Codd's urgings to fend off the persistent challenge of Blue Sari (7/2) to justify 2/1 favouritism and score by three-quarters of a length.
Elliott, recording a 24th victory at The Festival overall and a 5.75/1 double following Tiger Roll's 5/4 success in the Glenfarclas Cross Country Chase earlier on the card, said: "Envoi Allen is a very nice horse.
"We have always thought a lot of him and he did well to win. He is a horse for the future and we are delighted with his win today.
"I think that will probably be Envoi Allen's final run of the season. He will then go novice hurdling next year.
"He is going to end up being a three-mile chaser one day and the future is very exciting with him."
5.30pm £75,000 Weatherbys Champion Bumper (Grade 1) 2m 87y
1 Envoi Allen (Cheveley Park Stud) Gordon Elliott IRE 5-11-05 Mr Jamie Codd 2/1f
2 Blue Sari (J P McManus) Willie Mullins IRE 4-10-11 Barry Geraghty 7/2
3 Thyme Hill (The Englands And Heywoods) Philip Hobbs 5-11-05 Richard Johnson 20/1
14 ran
Time:
Distances: ¾, 1¾
Tote Win: £2.90 Places: £1.50, £2.00, £4.70 Exacta: £12.30
Gordon Elliott - 24th winner at The Festival
Jamie Codd - 9th winner at The Festival
CODD LOOKS TO THE HEAVENS AFTER RIDING NINTH FESTIVAL WINNER
A tearful Jamie Codd remembered his late brother Willie when reflecting on victory aboard the Gordon Elliott-trained Envoi Allen in the G1 Weatherbys Champion Bumper.
It was his ninth Festival winner, and second at this year's meeting following victory on Le Breuil in yesterday's National Hunt Chase.
Codd, who was joined in the winner's enclosure by his parents, had just worn the colours of David and Patricia Thompson's Cheveley Park Stud as Envoi Allen (2/1f) fought hard to hold off Blue Sari (7/2) and Thyme Hill (20/1) by three-quarters of a length and one and three-quarters of a length.
Codd said: "It's an emotional day and we've had a tough year after losing my brother last year. He's up there looking down and I hope he's very proud. William was a big supporter of mine when I started riding and, God, I wish he was here."
Envoi Allen was bought by bloodstock agent Tom Malone for £400,000 at Tattersalls' Cheltenham February Sale 2018 on behalf of Cheveley Park Stud. He had run in and won a point-to-point, and has now added four bumper victories.
Codd said of the five-year-old: "He's an incredible horse, 17 hands and a big baby, and now he's won a point and four bumpers. I feel it's my job to educate him this year and mind him for his future assignments over jumps.
"All I wanted to do was make sure he would learn something and really finish off his races, and he's done that today. He will be a ride for Davy Russell or Jack Kennedy next year, but I'm just delighted to be associated with such a horse at this stage of his career. He's beautiful - he only cost £400,000 mind, but Tom Malone saw something in him that day and Gordon, myself and Cheveley Park have all benefited." 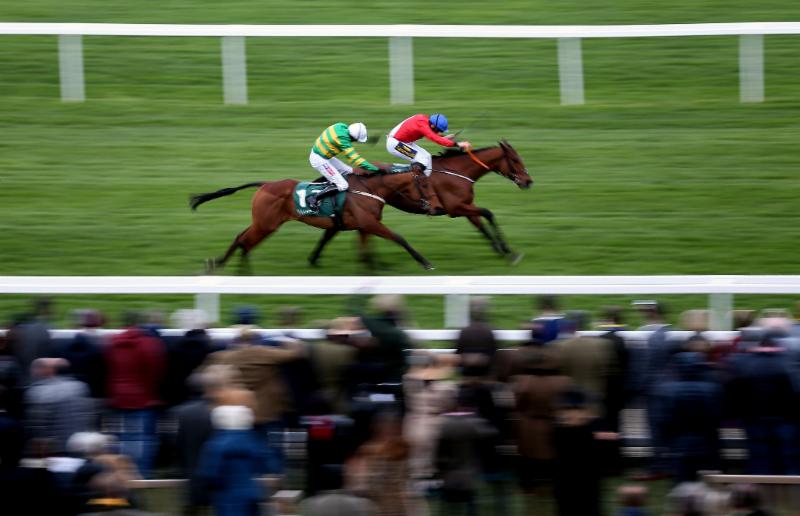 SECOND CHELTENHAM WIN WITH ENVOI ALLEN PUTS CHEVELEY PARK STUD TOP OF THE CHELTENHAM OWNERS' TABLE
David Thompson's decision to participate more prominently in Jump racing has quickly reaped rich rewards, and G1 Weatherbys Champion Bumper winner Envoi Allen was the second winner of The Festival 2019 to carry the famous Cheveley Park Stud colours that we are more used to seeing on the Flat, following the success of A Plus Tard in Tuesday's Close Brothers Novices' Chase.
Thompson and his wife Patricia, who enjoyed Randox Health Grand National success with Party Politics in their alternative colours in 1992, were unfortunately unable to attend, but Chris Richardson, managing director of the Newmarketstud, explained the increased enthusiasm for jumping.
He said: "David Thompson decided last year that he wanted to have some fun and some entertainment during the winter, and he wanted the Cheveley Park colours to be displayed on all aspects of the operation.
"They obviously love what goes on at the stud and on the Flat, but David felt the winters were a bit slow. He wanted to have runners at Cheltenham and we've provided five of them, and now two have won. We still have one more to go, as Alloha runs on Friday in the Albert Bartlett."
He added: "We have 22 horses, mostly in Ireland and spread between Henry De Bromhead, Gordon Elliott and Willie Mullins, and they've all done a fantastic job. I don't really have a lot to do with it - I'm just lucky enough to be managing director of the company.
"Alex Elliott purchased A Plus Tard, who we sent to Henry, and Tom Malone bought Envoi Allen (for £400,000 at Tattersalls Cheltenham last year)."
At the halfway stage of The Festival the Cheveley Park Stud leads the owners' table with two winners, with no other owner having had more than one.
The Thompsons have no Grand National runner yet, but Richardson is on the lookout for one and there is plenty of time.
MULLINS ISN'T BLUE ABOUT SARI'S SECOND PLACE
Willie Mullins, trainer of the three quarter of a length second, Blue Sari, in the closing race of day two at the 2019 Cheltenham Festival, was sanguine about his charge's run, saying: "We were always expecting the winner (Envoi Allen, 2/1 favourite) to pull out more, he is a good staying chaser [in the making]. We had a good run.
"We have a nice gap between here and Punchestown (April 30 - May 4), but it will depend on how he comes out [of the race]."
Phillip Hobbs who trained the third home, Thyme Hill (20/1, one and three quarters of a length further back), commented on his horse's run: "I am chuffed to bits. He ran very well here in the Listed bumper in November, and he is a horse that wasn't going to need a lot of racing.
"He had probably improved a bit, and I thought we might finish sixth or seventh but to finish in the first three is great.
"Hopefully, he is a nice, decent prospect for next year.
"I would say that he would probably have a break but we see how he comes out of this race."