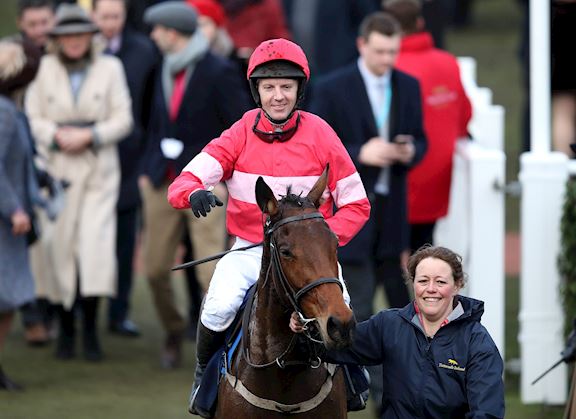 Trained by Willie Mullins, who has now won all four renewals of the £90,000 extended two-mile event (Limini 2016, Let's Dance 2017 & Laurina 2018), the five-year-old daughter of Saddler Maker got up on the line to record a short-head success from 66/1 stable companion Concertista.

Discussing the race, Fehily said: "I was fairly sure Eglantine Du Seuil's head was down on the line. I would have been very disappointed if I hadn't got up as I have come from a very long way back.

"Ruby Walsh said to me beforehand that she was very keen, so I dropped her right in. I was a long way back, but she was very tough and very hardy. She hasn't had a lot of racing but she ran well last time out, which was good form at Listowel in September.

"She will probably get further, but I think a fast-run two miles would really suit her as she is quite keen. She's a hardy little thing who enjoys coming through horses and her heart is as big as herself."

The 43-year-old continued: "This is going to be my last Festival as I am getting a bit old for this job - that will be it now.

"I am not getting any younger and it's a young man's game. I've been thinking about retiring for a couple of weeks. I wasn't well for a while and I just thought t was time to let the young lads get on with it.

"I have spoken to my agent Chris Broad who has been brilliant and my wife and kids. I haven't spoken to the trainers I ride for, so it will probably be in a couple of weeks, but we'll play it by ear.

"This is going to be my last Festival and I was obviously hoping I would get a winner here to be able to say it. Cheltenham is a very hard place to get a winner and you can't take it for granted.

"I won't forget this victory. I've had great support over the years and I've enjoyed every minute of it. I suppose I have to start working now!

"It has been a fantastic time. I love riding horses, but it's time to let everyone else get on with it."

Willie Mullins has now won all four runnings of the G2 £90,000 National Hunt Breeders' supported by Tattersalls Mares' Novices' Hurdle after Eglantine Du Seuil came with a stunning late burst under Noel Fehily to win by a short-head at 50/1.

Mullins also trained the second-placed horse, Concertista (Danny Mullins) who, at 66/1, was making her hurdles' debut.

It was a 64th Festival winner for Mullins, and means he takes the lead in the list of most successful trainers in Festival history after Nicky Henderson tied with him on 63 yesterday.

He said: "They have both run so well.  I was watching Danny on Concertista the whole time, and the next thing I saw something coming on the inside and I thought, 'keep going, Danny', then thought 'hopefully it's one of my own, as I had so many runners in it [seven]. It was a fantastic performance from Noel Fehily - and both horses and riders.

"I said to Noel, 'she's not the fastest in the world, so just get her jumping and try and get her to run well.'"

Asked why he chose this race for Concertista's first race over hurdles, he replied: "She's a good jumper! I couldn't run her this year on the ground at home but I felt she was well enough and her jumping was good enough to run over hurdles here. I said to Danny the same thing as to Noel - 'get her jumping and then if you can, get her into the race.'

"I could see her coming round the outside, full of horse the whole time. She just got into a little bit of trouble before the last and I was hoping he might come wide, but there you are. She's run a great race."

The finish of the G2 National Hunt Breeders Supported By Tattersalls Mares' Novices' Hurdle was dominated by rank outsiders, and the Willie Mullins-trained Concertista (66/1) failed by only a short head to land a remarkable Festival success on her first public appearance over hurdles, beaten only by her stable-mate Eglantine Du Seuil (50/1).

Jockey Danny Mullins said: "Willie is the master and I'm lucky enough to be riding for him. I'd ridden her a lot at home and we knew she had a big engine, and her jumping was good, but second is no fun.

"It was a great run though and she'll have a big future."

Anthony Bromley, racing manager to owners Simon Munir and Isaac Souede, gave all the credit for the bold decision to go straight to Cheltenham with a hurdles' debutante to the trainer and said: "The trainer had obviously seen something. He said she had been in some schooling hurdles and she is all right, and that was it, but you have to take note when he ran a debutante in a race like this.

"She was all right on the Flat, and she's very well bred."

Gordon Elliott, trainer of the third home Tintangle (40/1), said: "I thought she ran very well. I am very pleased."

Jockey Jack Kennedy, added: "We were happy with our run - it was a great run."