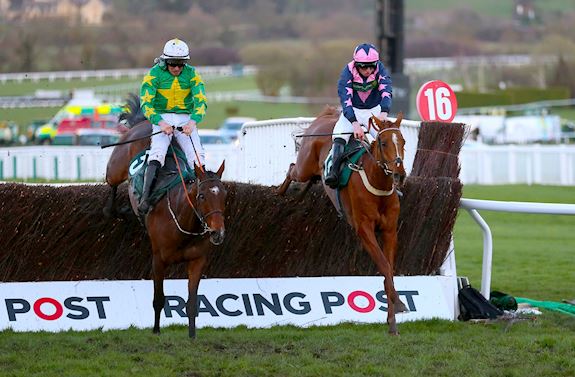 PAULING ENJOYS SECOND FESTIVAL SUCCESS AS LE BREUIL FIGHTS OFF DISCORAMA
Local trainer Ben Pauling is dreaming of a tilt at the Randox Health Grand National next year after 14/1 chance Le Breuil got the better of Discorama (9/2) by half a length in the finish of the Festival so far, the pair pulling 47 lengths clear of the third in a National Hunt Chase in which only four of the 18 starters completed.
It was a second Cheltenham win for Pauling, following the 2017 G1 Ballymore Novices' Hurdle success of Willoughby Court, and it seemed to mean every bit as much as the first.
Pauling, who trains at Bourton-on-the-Water, said: "I've got one thing in mind for this horse and that's the National next year, so let's hope he gets there in one piece.
"Winning here is just the best. We won here with Willoughby Court, but it's just as good second time around. It's incredible."
He added: "He was so gutsy there. That was very, very special. He jumped and he travelled, and with a circuit to go we knew we had a hell of a chance.
"Jamie Codd phoned up for the ride and thank God he did, because that was the icing on the cake and confirmed for us which race we were going for. He's one hell of a jockey, and hopefully it means as much to him as it does to us.
"That will be it for Le Breuil now."
CODD BRINGS LE BREUIL NICELY TO THE BOIL
Leading Irish amateur riders Jamie Codd and Barry O'Neill served up a battle royal in the closing stages of the National Hunt Challenge Cup over four miles.
Codd prevailed by half a length as the Ben Pauling-trained Le Breuil (14/1) wore down Discorama (9/2) from Paul Nolan's stable. There was a yawning 47 lengths back to third-placed Jerrysback (16/1).
The winner became Codd's eighth success at The Festival and his second in this race, and it came about after he put in a phone call to Pauling to ask if he might ride the horse.
Codd said: "I have to thank Niall Cronin [a friend of Codd's], who looked up this horse's form, and Tessa Greatrex [bloodstock agent and wife of trainer Warren] who I rang to get Ben's number. It has worked out brilliantly.
"Gordon Elliott had a ride in it for me but on Wednesday he said that one wouldn't run. Myself and Niall went through the form and we felt the race he ran against Santini at Newbury was good and we liked the way he galloped to the line at Haydock the last time he ran.
"He had a good rating and so we decided to ring Ben, who was very good. He just said, 'You won't let me down?' and I said 'No, that's 100 per cent, I'll ride him'.
"What a tough little horse to jump and gallop in that ground. It was a fair slog and I'm delighted he's won for Ben and the team. I got a great run around and kept him very wide. Looking at the videos, he had been making the running, but I just felt he might be better with a bit of room and going forward from midway.
"Going to the last, it was nip and tuck, and my lad has really battled and pulled it out.
"I was very fortunate that Ben had no one to ride the horse - two days later he might have found someone else and I'd be sitting in the weighing room. They say that what's meant for you won't go past you." 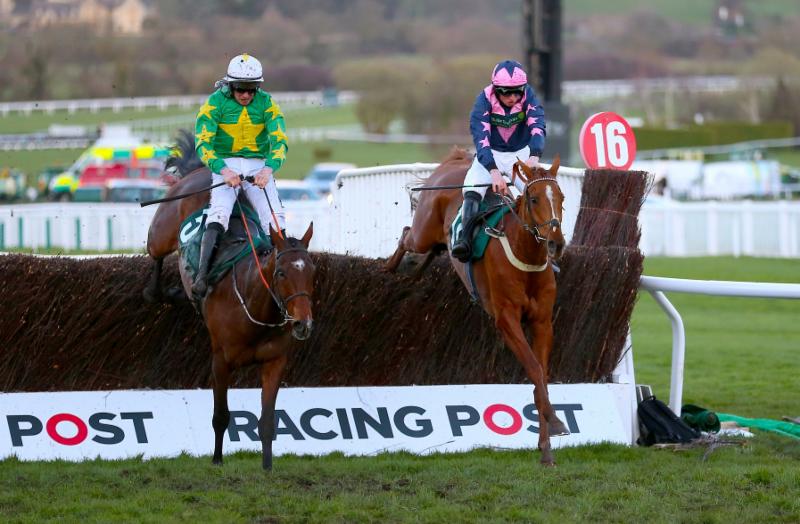 DISCORAMA GALLANT SECOND
After a ding-dong battle on the run-in in the final race of the opening day of the 2019 Festival, Barry O'Neill on the Paul Nolan-trained Discorama (9/2) went down by half a-length to the 14/1 winner Le Breuil ridden by Jamie Codd.
O'Neill reflected: "It was a very tough run. My horse had a fall last time out and was a little bit novicey early on. He was thinking about it a bit. I had to avoid one or two fallers.
"I got in a little bit tight to the second last and then he gave the last a bit of height.
"He went down fighting - it was just unfortunate that we finished second."
Nolan commented: "You are always disappointed, it is like being beaten by a last-minute goal. I thought he was going to win and then he didn't.
"There were probably a couple of little things that happened - we were unfortunate not to get a racecourse school after his fall and I thought he was too novicey early on, which sapped his energy a little bit.
"I blame myself for that, we should have had that better covered. I don't think the ground was an issue - they were 47 lengths in front of the next horse.
"Our fella had to swerve out to avoid a couple of fallers which also saps energy.
"If you had told me before that we were going to be second at Cheltenham I would have been delighted but it is a devil when you think you're going to win and you don't.
"That race will have taken an awful lot out of him and he is going to come back light so you have to imagine that that is going to be the end of his season.
"I think this horse is nice. How far he can go I don't know, but he is nice - he is a 150 plus horse, which means he can take his place in a lot of races. He is the best I have."
5.30pm National Hunt Chase (Grade 2)
1 Le Breuil (Emma Palmer) Ben Pauling 7-11-06 Mr Jamie Codd 14/1
2 Discorama (Thomas Friel & Andrew Gemmell) 6-11-06 Mr Barry O'Neill 9/2
3 Jerrysback (J P McManus) Philip Hobbs 7-11-06 16/1
9/4 fav Ballyward (Fell)
18 ran
Distances: ½, 47
Tote Win: £14.70     Places: £3.90, £2.20, £4.40 Exacta: £89.40
Ben Pauling - 2nd winner at The Festival
Mr Jamie Codd - 8th winner at The Festival
Ballyward
Sadly Ballyward sustained an injury in the National Hunt Chase. They were immediately attended to by our vet team, who very sadly determined that it was necessary to euthanize them on welfare grounds. As animal lovers, we hate to lose any horse and of course we shall review this incident. Our thoughts are with the Ballyward's connections.