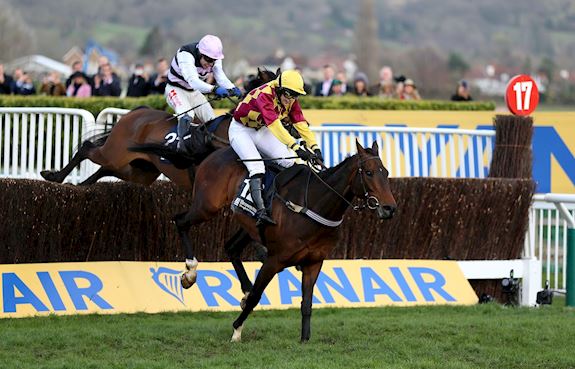 KELLY GETS HER MOMENT IN THE SPOTLIGHT
Ladies Day was yesterday - but women jockeys have starred today, with Lizzie Kelly following Bryony Frost's Ryanair Chase win with success on Siruh Du Lac in the G3 £110,000 Brown Advisory & Merribelle Stable Plate Handicap Chase.
It was Kelly's second success at The Festival™ presented by Magners - her first came last year on Coo Star Sivola in the Ultima Handicap Chase. She was the first female professional jockey ever to win a race at The Festival then. Today's victory is the 26th by a female jockey at The Festival in total.
It was a bold, front-running performance from Kelly and the six-year-old Siruh Du Lac, who is trained by Kelly's stepfather Nick Williams. They won by three-quarters of a length at 9/2 from the 3/1 favourite, Janika.
She said: "I watched Bryony and thought 'that was my game plan!' My question mark was whether Siruh Du Lac would stay, because I was not really in a position to be taking a pull down the back to get a breather into him. He travelled really well and by God, he jumped. He is an absolute monster and will come on from that as well.
"It was fantastic watching Bryony. She and Rachael [Blackmore, who won the Close Brothers Handicap Chase on A Plus Tard on Tuesday] are excellent jockeys and are making us perform better. I am delighted we have a really good girls' weighing room at the moment. With three winners this week, it is very good."
Kelly continued: "He jumps, and I just knew that was my biggest weapon. I wanted to control the race - I thought he'd get home because he battled back really well last time - but last time I was having to really hold on to him and not use his jumping to his best ability, and I just knew I could really get people into trouble early doors.
"He's a fantastic horse. We've always thought a lot of him and his owners, John White and Ann Underhill, have been so good to me in terms of letting me ride the horse every time. It's quite funny as we weren't going to run him. We were going to go for something a bit easier, and then I think John might have got all riled up in the prep for Cheltenham and we ended up here, but even last week we didn't know whether we were going or not.
"Me and him [Siruh Du Lac] work well together because I love that sort of heart on your sleeve type of ride; it works for me and it works for him. They don't really give me any instructions, just go out and do what you do. It's always lovely when you are riding for people who allow you to make the decisions. I wasn't going to make it - I was going to sit second behind Tom Bellamy [on Templehills], and then his folded quite easily after the first couple of fences, so I thought, 'I'll just go then'.
"I've always said with jockeys, there are so many inconsistencies in racing in terms of track, ground and so on, the one constant you can control is the jockey. I've always thought horses should have the same jockey. The fact that I know him so well, I can tell what he was thinking and was going to do. I was surprised that he quickened so well in the straight though. That was fairly impressive - to find another gear after two miles."
CORRECTION
Bryony Frost is not the first successful female rider of a Grade One race at The Festival - rather the first to win a Grade One chase or hurdle. Katie Walsh took the Grade One honours first with Relegate in the 2018 Weatherbys Champion Bumper.
SIRUH DU LAC GETS THE KNACK OF FESTIVAL GLORY
The Nick Williams-trained Siruh Du Lac (9/2) landed the Listed Brown Advisory & Merriebelle Stable Plate under a fine ride by Williams' step-daughter Lizzie Kelly.
The six-year-old son of Turgeon jumped with aplomb throughout the two mile and five furlong event and held on gamely in the closing stages to fend off the well-supported 3/1 favourite Janika, to score by three-quarters of a length.
Williams, recording his third victory at The Festival™ presented by Magners overall, said: "Siruh Du Lac didn't miss a fence, but he needed to be spot-on at the last.
"It was a brilliant ride from Lizzie, who was really positive, and it was perfect.
"He was able to dictate from the front rather than have the choke out from the front, which was important.
"Siruh Du Lac's form with Janika was very, very close and it was close today. I thought they would probably finish first and second, but didn't know which order.
"The six-week gap from the last race was perfect. We thought about going to Newbury a couple of weeks ago, but he wasn't really on the top of his game and needed the extra couple of weeks.
"We don't have too bad a record here, but it has not gone according to plan all this week. Thankfully, it has today and he was obviously our best chance.
"This was our last chance of the week - the last chance saloon!"
4.10pm Brown Advisory & Merriebelle Stable Plate (Grade 3)
1 Siruh Du Lac (John White & Anne Underhill) Nick Williams 6-10-08 Lizzie Kelly (3) 9/2
2 Janika (Simon Munir & Isaac Souede) Nicky Henderson 6-11-12 Daryl Jacob 3/1f
3 Spiritofthegames (N W Lake) Dan Skelton 7-11-03 Harry Skelton 6/1
4 Eamon An Cnoic (The Angove Family) David Pipe 8-10-07 Tom Scudamore 10/1
22 ran
Distances: ¾, 2¼, ½
Time: 5m 14.29s
Tote Win: £5.30       Places: £2.00, £1.70, £1.80, £2.50 Exacta: £19.10
Nick Williams - 3rd winner at The Festival
Lizzie Kelly - 2nd winner at The Festival 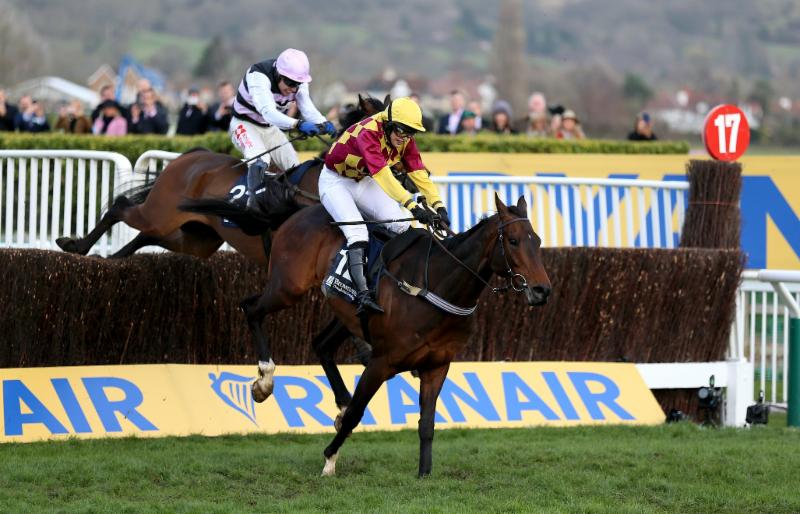