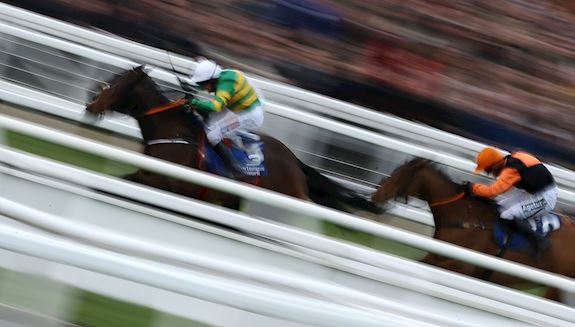 SIRE DU BERLAIS SUCCESS OWED IT ALL TO GERAGHTY AFTER TROUBLED PASSAGE
Backers of long-time ante-post fancy Sire Du Berlais (4/1 favourite) owe a huge debt of gratitude to jockey Barry Geraghty after The Festival's second most successful jockey of all time gave the seven-year-old the ride of the meeting so far to get him home a neck ahead of Tobefair (40/1).
Geraghty, who was taking his Festival score to 38 and completing a 19/1 double in the first two races following the success of Defi Du Seuil, was unlucky in the corresponding race 12 months on nose second Glenloe and it looked for much of the last mile as if he was going to struggle again on the well-backed winner, who traded at 240/1 in running.
He said: "I thought I was in trouble coming away from three out - it got tight for room - but he rallied and rallied. It was a good battle and a game performance.
"My three kids are at home watching - Síofra, Órla and Rian. Órla's class had the TV on in the classroom for the last race, so I hope they had it in for this race as well."
He added: "It was a good performance from the horse because he wasn't in the prettiest spots. There was plenty of traffic, but he was responding to urgings and was a willing partner.
"I was never confident, but I was hoping to get Mark Walsh (Not Many Left) on my outside, and then when I got him I saw another one (Tobefair) coming on my inside, so then I was just hoping for the line. There was a lot of hoping.
"It's just great to get winners here. Not every lad is as fortunate as I am to get on good horses who can win, and there are good lads in there who aren't riding winners. It means so much. It's the be all and end all."
ELLIOTT'S PLAN WORKS OUT
Gordon Elliott, the leading trainer at the past two renewals of The Festival™ sponsored by Magners, is creeping into contention for the title again; Sire Du Berlais's victory in the G3 £100,000 Pertemps Network Final Handicap Hurdle was his third of the meeting, following Tiger Roll (Glenfarclas Cross Country Chase) and Envoi Allen (Weatherbys Champion Bumper).
Sire Du Berlais, the 4/1 favourite, snatched the race in the final strides from 40/1 chance Tobefair (Tom Bellamy), winning by a neck.
It was owner J P McManus and jockey Barry Geraghty's second consecutive victory of the day - they also took the first race, the JLT Novices' Chase, with the Philip Hobbs-trained Defi Du Seuil.
Elliott, for whom it was a 25th Festival success, said: "Going to the last, I thought that we were beat. Barry gave him a great ride because he got stopped a couple of times at the top of the hill. He was short of room up there but Barry didn't panic. The plan was not to get there too soon and Barry delivered brilliantly.
"This has been the plan for a while - it looked the race to go for - and I am glad that it has worked out. It's great to have a winner for the McManus family. We had a slow start to the week, but we have had three winners now and I am delighted." 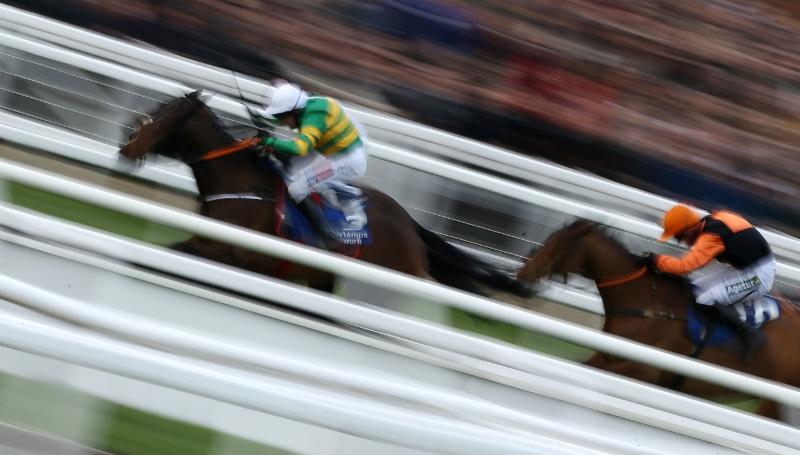 FAIR DENIED BY GERAGHTY BRILLIANCE
Welsh trainer Debra Hamer was the proudest person in Cheltenham after 40/1 shot Tobefair finished second to the well-supported 4/1 favourite Sire Du Berlais in the G3 £100,000 Pertemps Network Final
Ridden by Tom Bellamy, the nine-year-old son of Central Park ran on strongly up the Cheltenham hill, but was denied by one of the great Festival rides by Barry Geraghty, who lifted Sire Du Berlais, trained by Gordon Elliott, to victory by a neck.
Tobefair was well fancied for the Pertemps Network Final in 2017 after notching seven victories in succession, but was well-beaten in 22nd behind Presenting Percy.
Pembrokeshire-based Hamer said: "Tobefair has run a brilliant race. He loves his work at home and we're just delighted that he has run so well.
"He returned to form at Chepstow last time. We maybe just ran him too many times after he won seven on the bounce and the whole thing just got to him.
"Tobefair has just come back into himself of late and we could not be more proud of him.
Bellamy commented: "Sickening, but it is great to have him back. He is where he was two seasons ago. I rode him at Chepstow the other day and he ran a blinder then. I wasn't quite expecting him to run like that today.
"It is fantastic for everyone involved to get him back to where he belongs.
"Paul and Debra (Hamer), they haven't got many horses, but they do very well with what they have - fair play to them for getting him here in top shape.
"It was great to get so close, but horrible as well."
The Jessica Harrington-trained Not Many Left (16/1) was a further length a quarter back in third. His jockey Mark Walsh added: "He jumped and travelled brilliantly but was beaten by a better horse."
2.10pm Pertemps Network Final Handicap Hurdle (Grade 3)
1 Sire Du Berlais (J P McManus) Gordon Elliott IRE 7-11-09 Barry Geraghty 4/1f
2 Tobefair (Down The Quay Club) Debra Hamer 9-11-00 Tom Bellamy 40/1
3 Not Many Left (Robcour) Jessica Harrington IRE 6-11-05 Mark Walsh 16/1
4 Cuneo (Gigginstown House Stud) Henry de Bromhead IRE 7-11-01 Rachael Blackmore 12/1
24 ran
Distances: nk, 1¼, 2
Time: 5m 52.98s
Tote Win: £4.80 Places: £2.10, £10.10, £4.00, £3.60 Exacta: £281.20
Gordon Elliott - 25th winner at The Festival
Barry Geraghty - 38th winner at The Festival