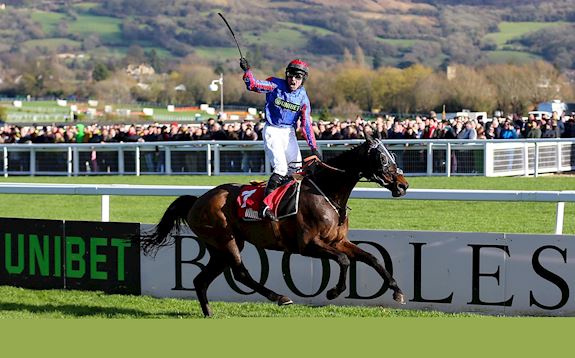 Beware The Bear’s 10/1 victory in the G3 Ultima Handicap Chase was trainer Nicky Henderson’s 61st Festival win – and his first in the three-mile,  one furlong race since Marlborough in 2000.

The Shantou nine-year-old was fourth in this contest last year and, under Jeremiah McGrath, won by a length and a quarter, beating Vintage Clouds in the 24-strong field.

Henderson said: “That was fabulous. We put the blinkers on him on Festival Trials Day here and tried to make the running – there were only six runners that day, he had a lovely, soft lead and enjoyed himself. But normally we try and get up there with him and he drops himself out and comes home with a rattle. So I said to Jerry [McGrath], let’s start where he’s going to put himself – start out the back, then he can come and work past horses, rather than having to press.

“O O Seven [12th, ridden by Nico de Boinville] ran a great race as well, he loved it up the front and we slightly changed tactics with both of them.

“Bear had lots of daylight, lots of time to just find himself. He stays well and he enjoyed himself.

“It’s nice to get one on the board and settle everything down. Buveur D’Air doesn’t mind the soft ground – he goes on anything – but we know Laurina and Apple’s Jade love it. We’ve been waiting for this since this time last year. He’s won on very soft ground before.

“Both Angels Breath and Mister Fisher [who finished seventh and eighth in the Sky Bet Supreme Novices’ Hurdle] were disappointing but they found the ground horrible and didn’t like it. Probably, a little bit of inexperience as well but the ground more than anything.”

THE BARLOWS CAN NOW BEAR THAT 1973 FESTIVAL LOSS

Racehorse owner George Barlow had waited 46 years to enjoy a winner at The Festival, having had one snatched from his grasp in 1973.

That was when Bear’s Slipper, who he owned and trained, won the then four-mile St James’s Place Foxhunter Chase, only to lose the race in the stewards’ room.

Today there was simply the pleasure of winning for Cheshire-based Barlow and his wife Anne after Beware The Bear (10/1) carried their colours to a ready victory in the Ultima Handicap Chase. The Nicky Henderson-trained winner scored by one and a quarter lengths and two lengths from Vintage Clouds (16/1) and Lake View Lad (25/1), who each carried the colours of Trevor Hemmings. Big River (28/1) was three and a quarter lengths further back in fourth.

George Barlow, proudly holding up a lucky (and tiny) teddy bear for the cameras, said: “We never encourage people to back our horses, but when Beware The Bear has blinkers on he is different gear.

“I was robbed in 1973 when I had a permit and Bear’s Slipper, ridden by Billy Foulkes. had the Foxhunter taken off him in the stewards’ room.” His wife said: “This is a dream. We’ve always dreamed of having a Festival winner.”

Nick Alexander was thrilled with third-placed Lake View Lad, whose place as a leading candidate for the Randox Health Grand National was endorsed by his run today. Alexander, nursing a dislocated shoulder, the result of a skiing accident, said: “I’m thrilled with the horse. He’s carried top weight in a competitive handicap and he’s finished a close third. I could not be happier.

“The plan was to go to Kelso then Aintree, but we swapped Kelso for this and it has worked out. Henry [Brooke] has given him a lovely ride and he’s jumped every fence without making a mistake.

“Now I’ve just got to look after him and get him to Aintree – so long as we don’t get blown over on the M74 going home tonight. He’s progressed so well this season and he’s a great horse to have in the yard. He stayed so well today.”

Jerry McGrath admitted success was owed in good part to trainer Nicky Henderson’s last minute change of orders after enjoying a second success at The Festival on 10/1 chance Beware The Bear, who held off the Trevor Hemmings runners Vintage Clouds and Lake View Lad by a length and a quarter and two lengths in the £110,000 Ultima Handicap Chase.

He said: “It’s very funny because before the race I had it in my head that I was going to do what I did on New Year’s Day - pop out, make the running and keep it simple.

“But Mr Henderson took the saddle off me and said to drop in, creep away and keep him wide. It is one of those that if he said to me this morning, I would have spent too much time thinking about it, but the fact he said it to me just before the race meant I just went out and did it.”

He added: “The blinkers made a big difference. Even though we gave away ground on the outside, he jumped and travelled everywhere.

“I didn’t realise it had been seven years since my first win here on Une Artiste in the Fred Winter. It is a typical story in that you probably take it for granted. God, I will enjoy this one.

“The owners are lovely, old owner/breeders. They really enjoy it and I am delighted for all of them. It was a messy start again – it has been a theme of the racing so far. It was a slow-enough start, but it didn’t bother me because sometimes you can go on horses too early in these big handicaps.

“I got into a nice rhythm on the outside. I was wary of a few horses in front of me that have brought me down in the past, so I was keeping out of their way. It may have looked like a very intentional plan to go wide but it was more than fact of trying to keep out of trouble.

“I got a great run round and his jumping is exceptional. He is a big horse, who is better going in a fraction long than short and popping one, but he is all heart. The blinkers have really rejuvenated him and it’s brilliant.

“He was wearing blinkers for a reason and you are just hoping he wasn’t going to prick his ears. I could see the head of Danny Cook’s horse coming and I was just praying the line was coming. To be fair, the horse answered every call.

“I rode him in the Scottish National last year, but he has had his wind done since. It was on very quick ground in April and he didn’t enjoy it – he didn’t go a yard and pulled up in the straight. If there was a bit of give in the ground, I think he could take a lot of beating but he could take up a step up further too. He is not a young horse, but is on an upward curve.

“You don’t appreciate having a winner here the first time. You think it is going to happen every year or every second year but it’s so hard to get rides at Cheltenham, never mind winners. I am thankful for the great team I have around me.”

Unlike the placed horses, Beware The Bear is not entered in the Randox Health Grand National at Aintree on April 6, and McGrath suggested he was likely to be aimed instead at the Scottish National at Ayr. He said that the ground had been too quick when he ran in it last year.

Sue Smith was delighted with the performance of Vintage Clouds (16/1) who finished a creditable length and a quarter second to Nicky Henderson’s Beware The Bear (10/1) in the G3 £110,000 Ultima Handicap Chase.

Always prominent under Danny Cook throughout the three miles and one furlong event, the nine-year-old son of Cloudings kept on tenaciously in the home straight but found Beware The Bear, ridden by Jeremiah McGrath, too strong up the Cheltenham hill. Vintage Clouds was third in this race last year and fell two out when prominent in 2017.

Smith is now targeting the £1-million Randox Health Grand National at Aintree on Saturday, April 6. Discussing the Trevor Hemmings-owned gelding, Smith said: “That was a great run by Vintage Clouds. He has just come back from a small wind op and we’re absolutely delighted with him.

“He jumped great and we couldn’t ask for more from him. Vintage Clouds always runs his race and he has been a real star for us.

“Danny gave him a lovely ride and all the team have done a lovely job with him at home.

Jockey Danny Cook added: “I was really pleased with that performance from Vintage Clouds – that should put him spot on for Aintree and that was a nice warm-up race.”

The Nick Alexander-trained Lake View Lad (25/1) was a further two lengths back in third and like Vintage Clouds, is owned by Hemmings and has the Randox Health Grand National as his next target.

His rider Henry Brooke said: “This race sets up Lake View Lad perfectly for Aintree. He is a Grand National horse written all over. He was doing his best work at the end and for me, he has not had the hardest of races – we’re delighted and all sights are not set for April. With a good round, he should be in the mix at Aintree.”

Hemmings added: “Vintage Clouds and Lake View Lad are two good ones and they are both in the Grand National. That's the main objective and today's just a refresher.”

Derek Fox, rider of Big River (28/1), three and a quarter-lengths back in fourth, commented: “Big River got outpaced on the second circuit and got in deep to a few fences. He is probably a horse who will stay four miles as he just keeps galloping away, so we’re happy with the run.”