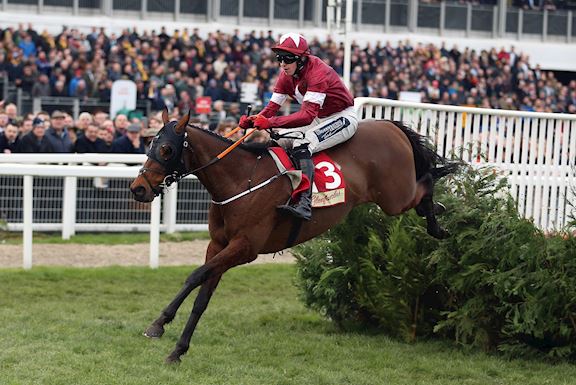 'NOT A GOOD HORSE, A GREAT HORSE' SAYS EDDIE O'LEARY OF TIGER ROLL
Tiger Roll continued building his place among the Cheltenham Festival's all-time favourites when winning his fourth race at the famous meeting.
Today's win in the Glenfarclas Cross Country Chase was his second in the race, following on from last year's success, and complemented other wins in the G1 JCB Triumph Hurdle (2014) and National Hunt Chase (2017). To that quartet can be added success in the 2018 Randox Health Grand National, yet it could be argued today's triumph, as the 5/4 favourite, was his best performance, and certainly one of the easiest.
He tanked through the race under jockey Keith Donoghue and trounced his rivals, beating the 2016 winner Josie's Orders (15/2) by 22 lengths, with last year's runner-up, Urgent De Gregain (17/2) a further three-quarters of a length back in third. Paddy Power shortened the winner to 6/1 from 10/1 to repeat his Aintree victory.
Eddie O'Leary, brother of Michael and part of the Gigginstown House Stud team which owns Tiger Roll, said: "He's an amazing horse. He's not a good horse, he's a great horse. He's just incredible, and while he's not a Don Cossack [the Magners Gold Cup winner owned by Gigginstown House Stud] he's a great horse.
"He looks to be a freak of nature, and people forget he had stopped racing. He was sick of the game and didn't want any more of it, then Keith Donoghue took him hunting [in late 2017] and went down the cross-country route and he got his mojo back. Now he loves racing, and it's all down to Keith, Gordon [Elliott] and the team at home.
"The cross-country discipline really invigorated him, so while people dismiss this race, don't forget what it can do for some horses."
Donoghue said: "He is some legend, definitely a legend in my eyes anyway. It was some performance on heavy ground - he just tanked around and, the further he was going, the better he was getting. He is just a legend of a horse.
"I wasn't too sure coming back on the main course how far I was clear, but I jumped the second-last, gave him a bit of a squeeze and he came alive. I could see the big screen and saw that I was about 10 lengths clear, so I just needed to get him over the last. I think he is better than ever this season. His run the last time out over hurdles was a serious run and today was arguably his best performance.
"He was a Festival winner for me last year and is probably the horse who has got my name out there. He is just a legend. If it wasn't for Gordon, I wouldn't be in this situation and Tiger Roll wouldn't be such a good horse. He is a master of a trainer."
TIGER'S STILL ON A ROLL
Gordon Elliott was relieved to get a winner on the board, courtesy of the indefatigable Tiger Roll, the 2018 Randox Health Grand National winner, in the Glenfarclas Cross Country Chase. It was nine-year-old Tiger Roll's fourth win at The Festival™ presented by Magners, and his second successive victory in this race. Keith Donoghue was in the saddle, and the 5/4 favourite won by 22 lengths.
It had not to that stage been the week Elliott - leading trainer at The Festival for the past two years - had hoped for, with just a couple of placed horses from his large team of fancied runners.
Elliott said: "We had a third in the RSA, a third yesterday and a winner today. It has been a rough week, but it's Cheltenham, it's the Olympics and that's where you come.
"Our horses haven't been running up to par this week but we have got to keep our head up, keep smiling and going forward. I have a good bunch of horses, I haven't lost faith in them and hopefully my owners won't lose faith in me.
"Keith is brilliant. He is a big part of our team and, for him to win the Cross Country Chase again is class. Tiger Roll looked very good and we are delighted with him."
Owner Michael O'Leary said: "Terrific. He's just an amazing little horse. He comes here every year and it's phenomenal. I didn't think it would happen today, but there was never a moment of doubt, which is most unusual round here. Great training performance by Gordon and a terrific ride from Keith.
"This is his Gold Cup this year. I'm not sure whether he will go back to the National or not; he's got a lot more weight. You still pinch yourself - this is a horse we bought as a four-year-old to win a Triumph Hurdle. To do that and come back here to win a slog-fest like this, it's remarkable.
"I'd worry about sending him back to Aintree carrying top-weight. He barely scraped over the line last year, and he is up 9lb in the ratings. It is not certain he will run in the National; we've got other horses for the National. It's more about minding him now rather than going back to defend the National title. You never win the National two years in a row. You don't want to go to the well every time. He's small of frame and stature and he has to carry a lot of weight at Aintree. He's won a Grand National and owes us nothing."
4.10pm Glenfarclas Cross Country Chase
1 Tiger Roll (Gigginstown House Stud) Gordon Elliott IRE 9-11-04 Keith Donoghue 5/4f
2 Josies Orders (J P McManus) Enda Bolger IRE 11-11-04 Mark Walsh 15/2
3 Urgent De Gregaine (Arnaud Rasquier) Emmanuel Clayeux FR 11-11-04 Felix de Giles 17/2
15 ran
Distances: 22, ¾
Time: 8m 27.28s
Tote Win: £2.10      Places: £1.40, £1.90, £2.30 Exacta: £11.80
Gordon Elliott - 23rd winner at The Festival
Keith Donoghue - 2nd winner at The Festival 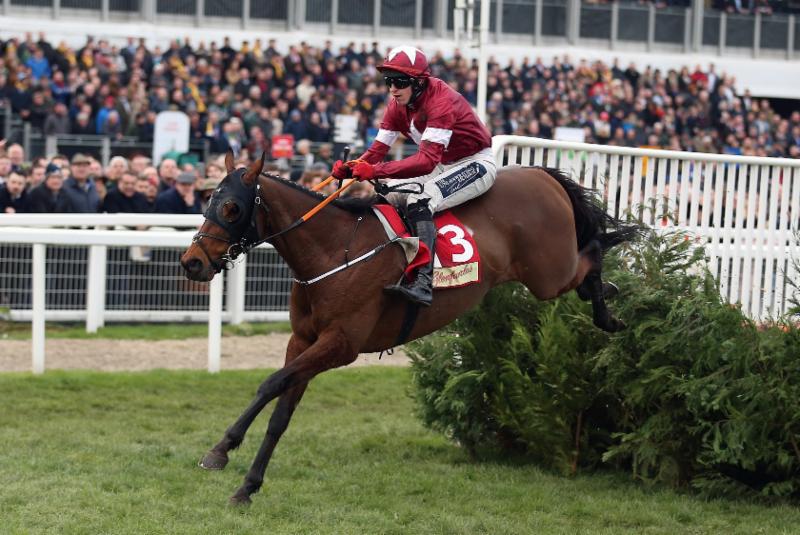 BOLGER HAPPY TO BE SECOND
An imperious display from the winner of the Glenfarclas Cross Country Chase, Tiger Roll (5/4 favourite), saw 15/2 chance, Josies Orders, come a distant 22-length second in the £65,000 race.
Enda Bolger, trainer of Josies Orders who won this race in 2016, was nonetheless pleased with his horse's run, saying: "That was the script. We were up against another Red Rum.
"Tiger Roll is a different class.
"Our lad ran up to his form - the best horse won. We are very happy to be second."
Jockey Mark Walsh, added: "Josies Orders ran well and I am delighted with him. He was never going to beat the winner."