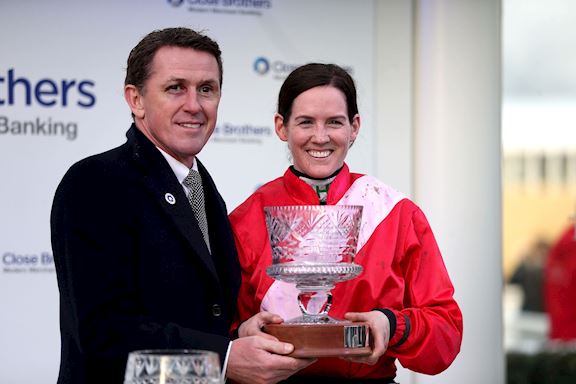 NOTHING TARDY ABOUT PLUS
The Henry de Bromhead-trained A Plus Tard recorded an impressive success to justify 5/1 favouritism in the £70,000 Listed Close Brothers Novices' Handicap.
Ridden by Rachael Blackmore, recording her first success at The Festival, the Cheveley Park Stud-owned gelding travelled with menace throughout the two mile and four-furlong event.
A Plus Tard sauntered clear under a motionless Blackmore approaching the home straight and sealed victory with a fine leap at the last, powering up the hill to score by 16 lengths.
The five-year-old son of Kapgarde scored at Naas in December, defeating this afternoon's G1 Racing Post Arkle Novices' Chase winner Duc Des Genievres, and A Plus Tard backed up that victory with an imperious success at Prestbury Park.
Winning trainer de Bromhead, registering his sixth win at The Festival overall, said: "A Plus Tard looked really good. Rachael was fantastic on him and gave him a super ride.
"I am delighted to get a winner for the Thompsons. It is really good of them to support us. They have a few real nice jumpers.
"We have always liked A Plus Tard. He had a couple of good runs and beat Duc Des Genievres in Naas, so that was fairly telling. I was a bit disappointed the last day but he just looked tapped for toe. This looked the right race to go for once he got in.
"Rachael is a brilliant jockey and we are very lucky to be associated with her. She as tough as any of them and bounces back up every time."
BLACKMORE JOINS THE EXCLUSIVE CLUB OF FEMALE WINNERS AT THE FESTIVAL
Rachael Blackmore's impressive success in the Listed Close Brothers Handicap Chase aboard the Henry de Bromhead-trained A Plus Tard was her first at The Festival™ presented by Magners. She is the 15th female jockey to win at The Festival, and A Plus Tard is the 24th female-ridden winner in the meeting's history. She is the third professional female jockey to win, following two last year - Lizzie Kelly and Bridget Andrews.
Blackmore, 29, is second with 84 winners in the Irish jump jockeys' championship to Paul Townend (94) at present. She has had more rides than any other jockey in Ireland this season. She has more booked rides at The Festival - nine up to and including Thursday - than any other female jockey in history; the greatest number before this was five.
A Plus Tard, the 5/1 favourite, won by 16 lengths from Tower Bridge.
Blackmore said: "He has won incredibly well. When Duc Des Genievres won the Arkle, that was franking my form [A Plus Tard beat Duc Des Genievres by three and a quarter lengths in a beginners' chase at Naas in December], but I never thought I would be coming up that hill like that. It's unbelievable. The race went perfectly.
"Henry de Bromhead has put a lot of faith in me this week, considering I had never ridden a Festival winner; he's put me up on a lot of them, including in Grade Ones, and I'm very grateful to him. It's phenomenal. He's been extremely good to me all year and this is a very nice horse for the future.
"Cheltenham has its own kind of atmosphere and pressure attached to it but Henry left it up to me and gave me very easy instructions. He was going to be able to blame me if it didn't go right! To be honest, I was never winning with that margin in my mind. It's fantastic to get a winner here - it's what every jockey dreams about and I'm just so grateful to get to ride a horse like him and just steer him up the hill." 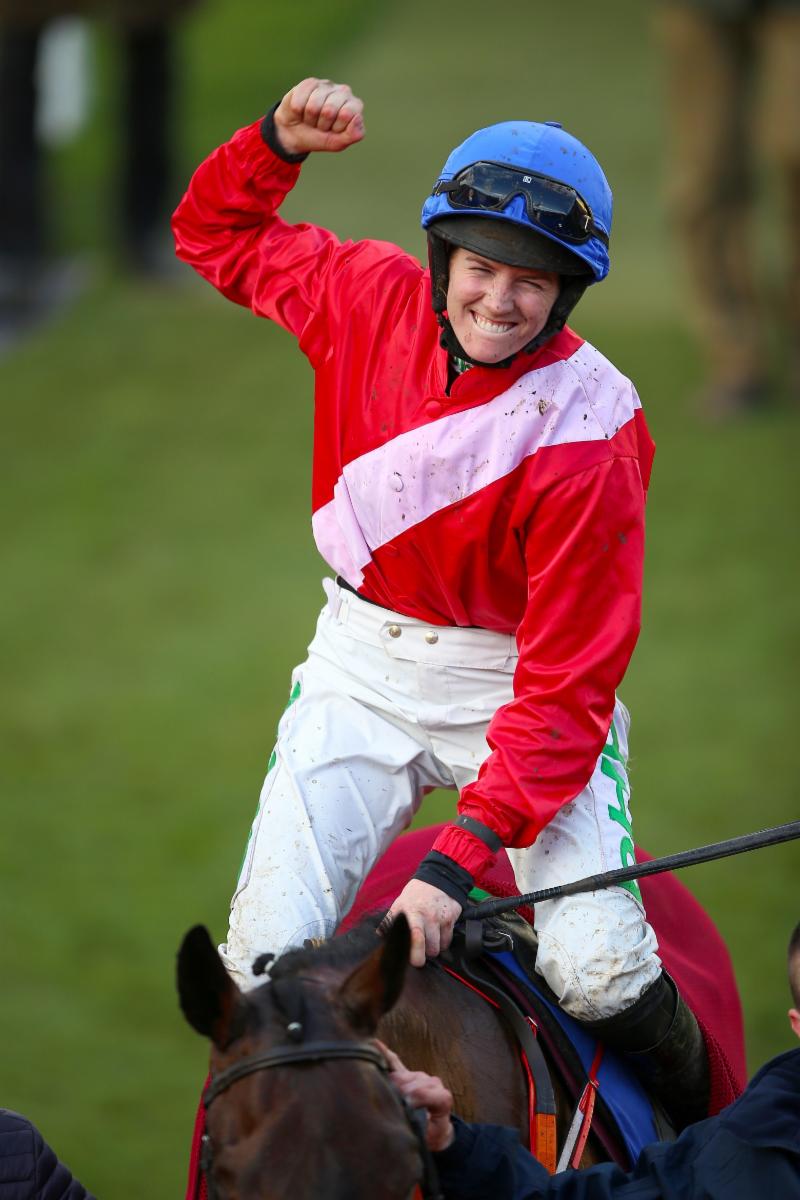 BRIDGE AND BEN CHASE HOME TARD
On a day of runaway winners A Plus Tard joined their ranks when landing the Close Brothers Novices' Handicap Chase.
Sent off the 5/1 favourite, he finished 16 lengths ahead of runner-up Tower Bridge (6/1), who was four and a half lengths clear of Ben Dundee (33/1). Fourth place went to The Russian Doyen (20/1).
Joseph O'Brien, who trains Tower Bridge, said: "He ran well. He made one mistake, but it was his first run in a handicap so he was entitled to do that, and he galloped up to the line. He hasn't won yet over fences and so it probably makes sense at this stage of the season to keep him a novice. He could have a nice race in him next season. He's a good, fun horse."
Gordon Elliott, who trains Ben Dundee, said of the seven-year-old: "He's run well and we're happy with that. We'll get him home and make a plan."
Ben Dundee carried the colours of Chris Jones, whose father, also called Chris, owned Klairon Davis, winner of the 1995 Racing Post Arkle Trophy and the 1996 Betway Queen Mother Champion. Jones Jr said: "I'm delighted. He's run a cracker and I thought going to the second-last he might be in with a chance of winning. Any time you get into the winner's enclosure here, the inner sanctum, you're happy.
"We've had a lot of success here, but every year it becomes more challenging. That won't stop us trying.
"Mags O'Toole [bloodstock agent] bought him for us as a store. He comes from the family of Nick Dundee, who was a very good chaser for the Magnier family, and that's how he came by his name."
4.50pm Close Brothers Novices' Handicap Chase (Listed)
1 A Plus Tard (Cheveley Park Stud) Henry de Bromhead IRE 5-11-07 Rachael Blackmore 5/1f
2 Tower Bridge (J P McManus) Joseph O'Brien IRE 6-11-05 J J Slevin 6/1
3 Ben Dundee (Chris Jones) Gordon Elliott IRE 7-11-05 Keith Donoghue 33/1
4 The Russian Doyen (The Gosden Mob) Colin Tizzard 6-11-05 Harry Cobden 20/1
20 ran
Distances: 16, 4½, 3¾
Tote Win: £5.50       Places: £2.30, £2.30, £7.70, £5.50 Exacta: £32.30
Henry de Bromhead - 6th winner at The Festival
Rachael Blackmore - 1st winner at The Festival