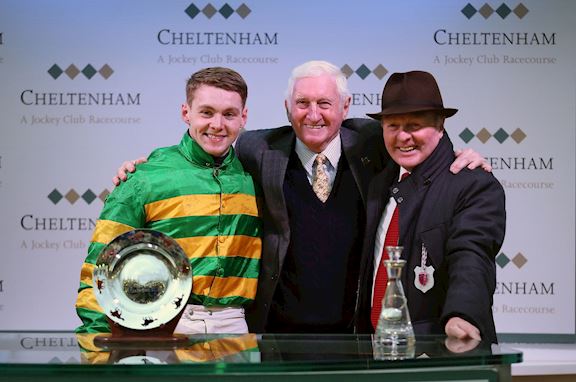 There was a poignant success in the final race of The Festival™ presented by Magners as the Joseph O'Brien-trained top-weight Early Doors (5/1) captured the £70,000 Martin Pipe Conditional Jockeys' Handicap Hurdle under jockey Jonjo O'Neill jnr giving owner J P McManus a fifth win over the four days.
The six-year-old son of Soldier Of Fortune ran on strongly in the closing stages to defeat the well-supported 7/2 favourite Dallas Des Pictons, trained by Gordon Elliott, by a length and a quarter.
O'Brien, recording his second winner of the week following Band Of Outlaws' victory in Wednesday's £80,000 G3 Boodles Juvenile Handicap Hurdle, said: "Early Doors has been running in Graded company all year.
"He came back to handicaps today and Jonjo gave him a great ride, so we are very happy. Jonjo is a fantastic rider. A couple of weeks ago I was speaking to Frank Berry [the owner's racing manager] and he said we could get Jonjo for the Martin Pipe, so I said let's have a go at that then."
J P McManus was crowned the NetJets Leading Owner at The Festival 2019. O'Brien continued: "It has been a wonderful week for J P. It won't feel that way with how today has gone, but he has had a wonderful week and he is well-entitled to it."
"We are devastated [about Sir Erec]. It is one of those things. It was well documented that he had a stone bruise, but he seemed perfect the last couple of days.
"We did a full set of x-rays two days ago, just to make sure there was nothing else going on, and they were perfectly clean.
"Mark [Walsh, jockey] just said he jumped the hurdle awkwardly, landed extremely awkwardly, and then he obviously got injured. It is one of those things, but I suppose when you see what happened in New Zealand last night, it kind of brings it into perspective a little bit, and we'll move on."
5.30pm Martin Pipe Conditional Jockeys' Handicap Hurdle
1 Early Doors (J P McManus) Joseph O'Brien IRE 6-11-10 Jonjo O'Neill Jnr 5/1
2 Dallas Des Pictons (Gigginstown House Stud) Gordon Elliott IRE 6-11-05 Donagh Meyler 7/2f
3 Defi Bleu (Gigginstown House Stud) Gordon Elliott IRE 6-11-04 Conor Brassil 14/1
4 Champagne Court (I F Gosden And Dj Coles) Jeremy Scott 6-10-05 Rex Dingle 14/1
24 ran
Distances: 1¼, 4, 7
Tote Win: £5.60 Places: £2.10, £1.90, £3.60, £4.40 Exacta: £25.30
Joseph O'Brien - 2nd winner at The Festival
Jonjo O'Neill Jnr - 1st winner at The Festival
DOORS START OPENING FOR O'NEILL JNR
A pair of sons of famous fathers teamed up to take the final race of The Festival™ presented by Magners 2019, the £70,000 Martin Pipe Conditional Jockeys' Hurdle.
Early Doors, trained by Joseph O'Brien - son of legendary trainer Aidan - and ridden by Jonjo O'Neill jnr, whose father Jonjo snr is one of only five people to have ridden and trainer a winner of the Magners Cheltenham Gold Cup, beat Dallas Des Pictons by a length and a quarter at 5/1.
It was Joseph O'Brien's second success of the meeting, following Band Of Outlaw's victory in the Boodles Juvenile Handicap Hurdle on Wednesday.
Twenty-one-year-old O'Neill jnr, enjoying his first victory at The Festival, said: "It's a massive thrill, and I'm just delighted that Mr McManus [J P McManus, Early Doors' owner, for whom it was a fifth winner of The Festival 2019] put me on him.
"The standing start didn't really suit Early Doors; he wasn't really travelling all the time and I was just having to niggle him along, but he was saving himself and I knew he was kind of like that so I wasn't too worried. They went a good gallop so I was hoping they would come back to us. To be fair to him, he really picked off the leader when he needed; he really knuckled down and tried to beat him. I thought when I got to the leader he'd pick up again. He [Early Doors] didn't quite fly the last, but he is a real gutsy little fella and he stuck his head down.
"I thought he ran a cracker last year as a novice [he was third in this race under J J Slevin] and he's run in some Grade Ones this year; even though he was beaten a long way he had some good horses behind him, so I thought he's a Grade One, Grade Two horse back in a handicap and I thought he had an exceptional chance.
"Both Joseph and I are in massively privileged positions and we don't take that for granted whatsoever. So to do it together and on our own path is amazing. Joseph said, 'keep it very simple, get a good start and just sit where you are travelling and don't overcomplicate it.' That was kind of it - small words and he didn't need to say anything else.
"I've ridden this race - any race at Cheltenham - hundreds of times on the sofa!" 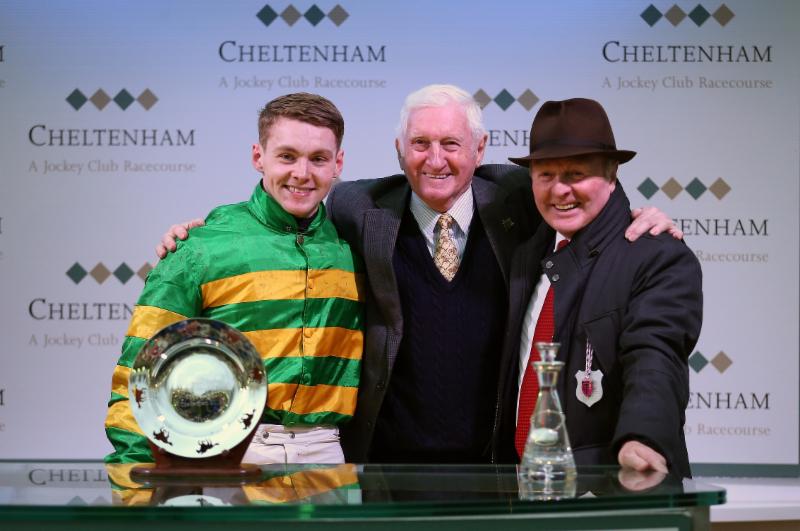 ELLIOTT HAS TO SETTLE FOR PLACES IN RACE HE HAD WON FOR LAST TWO YEARS
Gordon Elliott had three strong chances in the concluding Martin Pipe Conditional Jockeys' Handicap Hurdle, a race he won with Champagne Classic in 2017 and Blow By Blow 12 months ago, but while all three finished in the first six the Joseph O'Brien-trained top weight Early Doors (5/1) was just too good for them.
Runner-up Dallas Des Pictons (7/2 favourite) and third-placed Defi Bleu (14/1) both carried Michael O'Leary's Gigginstown Stud colours, as had Elliott's two winners of the race, but while the Ryanair boss ended the week with just one winner - Tiger Roll - he has plenty to look forward to.
O'Leary said: "They've both run well in a tough race and they are just babies. They'll come on well for it and they should both do well next season. They are baby chasers, so I'm very happy with that. The best horse won."
Reflecting on the week, he said: "I'd like to have had more winners as I had seven last year and only one this time, but that's an average of four a year and you have to be happy with that."