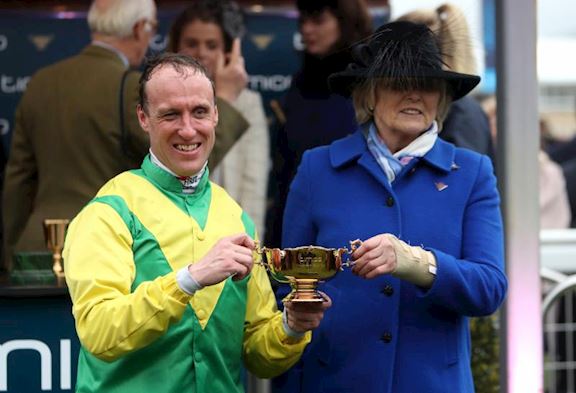 Robbie Power is hoping that last year's G1 Sun Racing Stayers' Hurdle runner-up Supasundae can go one better on Thursday and thus fill a significant gap in trainer Jessica Harrington's impressive CV at The Festival™ presented by Magners.
Harrington won the G1 Betway Queen Mother Champion Chase with Moscow Flyer in 2002 and 2003, the G1 Unibet Champion Hurdle with Jezki in 2014 and the G1 Magners Cheltenham Gold Cup with Sizing John two years ago, but she has yet to win a Stayers' Hurdle.
Power, whose four Festival wins include that Gold Cup on Sizing John as well as the Coral Cup on Supasundae the same year, has a busy week ahead of him.
His first day rides include the fancied Leopardstown beginner's chase winner Paloma Blue in the G1 Racing Post Arkle Novices' Chase, but he has never ridden him before and concentrated on his rides later in the week when discussing his best chances.
He said: "Supasundae was second to Penhill last year, and there's no Penhill to worry about this time. Paisley Park could be a tough nut to crack, but apart from him it is wide open.
"Supasundae is very consistent and always runs his race, so I think he's sure to go close. Jessie's won all of the big ones bar the Stayers' so it would be great to win that one for her."
Power, who was speaking at Cheltenham after riding out under clear blue skies on a cold morning, added: "I've got four or five rides on each of the first three days and on Wednesday I think Vision Des Flos should have a good chance in the Coral Cup. He looked good last time at Fontwell, and it looks as if the wind op they gave him has improved him. I'm looking forward to him.
"The same day Got Trumped should have a decent chance in the Fred Winter, as he'll appreciate the softer ground."
Thursday is probably his best day, however, for besides Supasundae he has Lostintranslation in the G1 JLT Novices' Chase and Walk To Freedom in the G3 Pertemps Final.
He said: "Lostintranslation was a good winner of The Dipper here on New Year's Day and is a horse I really, really like and Walk To Freedom has run two really good races since he won at Navan in November. He's got a lot of weight, but I think he has the class to carry it."
Friday is his quietest day at present, but these things can change. He said: "I'm riding one of Colin Tizzard's in the Albert Bartlett, although I'm not sure which one yet, but there's not much else at the moment and I haven't got a Gold Cup ride."

Robbie Power and Jessica Harrington after Sizing John's Gold Cup success in 2017
Ruby Walsh, who is hoping to be top jockey at The Festival for a 12th time, was among the other jockeys out on the racecourse this morning and among those he partnered was Benie Des Dieux, who is a hot favourite to repeat last year's win in tomorrow's G1 OLBG Hurdle.
Walsh, who has nominated the mare as his best chance of the w