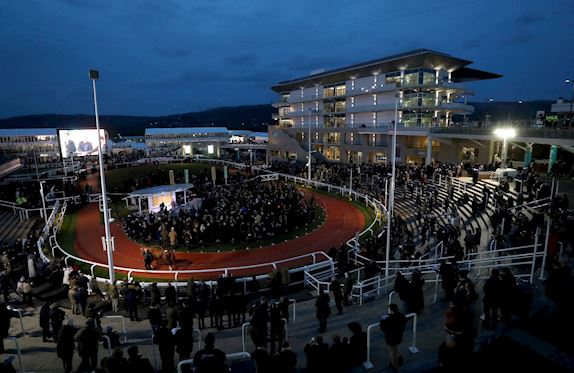 A four-year-old filly called My Whirlwind was sold for a record £400,000 in the winner's enclosure at Cheltenham yesterday evening during Tattersalls' Festival Sale.

The price was the highest given for a jumping filly or mare, beating the £320,000 at the same event two years ago for Maire Banrigh, who has won two hurdle races this season for trainer Dan Skelton

The new record-holder had won her only race to date, a point-to-point at Ballycahane in Ireland just under two weeks ago. She was knocked down to the sales' company's Matt Mitchell, who was taking instructions by phone, and said later he was acting for Nicky Henderson. The Lambourn trainer could not divulge which of his patrons is the new owner, but said: "We like mares and we like mares' races - there is a good programme for them now."

My Whirlwind was almost certainly bought with a return to The Festival™ in mind, and she has the credentials to tackle the NH Breeders Supported By Tattersalls Mares' Novices Hurdle or the G1 OLBG Hurdle - or possibly the G1 Unibet Champion Hurdle or G1 Magners Cheltenham Gold Cup.

She had been through a Tattersalls' sales ring twice before, selling for €7,000 as a foal and €42,000 as an unbroken three-year-old at the Derby Sale. The buyer was Pat Turley, who trained her to win at Ballycahane and sold her last night.

Bloodstock agent Tom Malone and Paul Nicholls teamed up to by four-year-old gelding Bravemansgamefor £370,000 - he had won an Irish point-to-point at Lingstown on Sunday for trainer Donnchadh Doyle, who bought him last year for €48,000.

On a highly-rewarding evening for Doyle he also sold another horse who made a winning start at the weekend. Farouk D'Alene was knocked down to agent Mags O'Toole and trainer Gordon Elliott for £260,000, having been bought last year when unbroken for £34,000.

Venetia Williams was another trainer hunting for fresh recruits on behalf of owners in her yard, and after teaming up with bloodstock agent Matt Coleman she paid £220,000 for four-year-old pointer Hold That Taught a half-brother to the very smart racemare Banjaxed Girl, and £200,000 for Crypto a five-year-old who won a bumper at Newcastle for Micky Hammond's stable.

Tattersalls' Director of Horses in Training Sales, Richard Pugh commented: "Tonight's trade was phenomenal. It was such a thrill to sell the highest priced point-to-point mare on record. This sale's stage is second to none; the atmosphere, the excitement and adrenalin witnessed in this very winner's enclosure was magically mirrored at tonight's sale and we wish vendors and purchasers alike the very best of luck."

For full results from yesterday's sale, go to www.tattersalls.com.