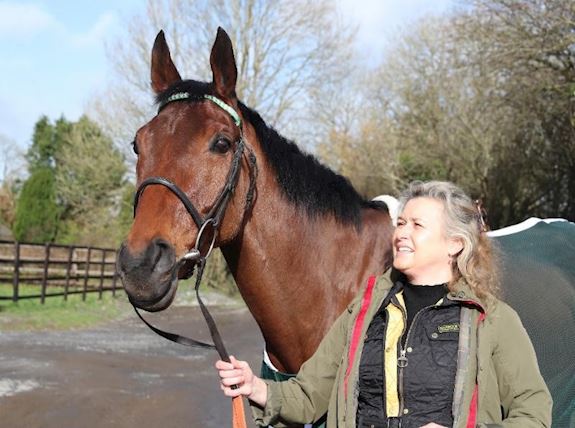 With exactly a week to go, Presenting Percy is all set for the Magners Cheltenham Gold Cup

Friday, March 8, 2019 - It is now exactly one week until the runners are set to go to post in the highlight of The Festival™ presented by Magners, the £625,000 G1 Magners Cheltenham Gold Cup. The Blue Riband of chasing is scheduled to go off at 3.30pm on Friday, March 15.

Presenting Percy is currently vying for favouritism for the extended three mile and two furlong contest. On his one outing so far this season, Presenting Percy was successful in the G2 John Mulhern Galway Hurdle at Gowran Park on January 24.

Owned by Philip Reynolds, the eight-year-old is seeking a third victory at The Festival following on from victories in the 2017 Pertemps Network Handicap Hurdle Final and the 2018 RSA Insurance Novices' Chase.

"Pat (Kelly, trainer) is happy with Presenting Percy as are all the team.

"We were delighted with his schooling session at Galway last week and he jumped nicely. The plan is to go back to Galway for another piece of work this weekend before we head over to England for the Gold Cup next week.

"The rain is starting to arrive at Cheltenham and of course the more it does rain, lack of rain won't be an excuse!

"However, the rain was never something we were pinning our focus on. He has won a Pertemps at Cheltenham on good ground and does handle a sounder surface fine. Cut in the ground is of course preferable, but we haven't run him on good ground so far this year as we just wanted to mind him with Cheltenham in mind. We were always going to run at Cheltenham even if the ground was good but the rain is obviously a help.

"Pat is pleased with him and it would of course be very special to win a Gold Cup on a number of levels. My father went to Cheltenham for years as did my father-in-law. It would also be special to see Pat have a Gold Cup winner and also for Davy Russell. His son Liam will be one at this year's Festival and he has been dubbed Liam Percy by Davy! It would also be great for me and an amazing honour to win the event.

"I am sitting here now and of course I am very nervous. We are a week away now and it is going to be an exciting yet nerve-wracking week

"Looking at the race, there are a number of horses who all have a great chance. There are five or six horses towards the top of the market who all have a chance, but probably the one I worry about is Bellshill. He is a G1 winner of a bumper, a hurdle and over fences and jumped very well in last year's Irish National. He stays, jumps and won't mind any type of ground, so he has the overall profile of one to watch.

"However, we are pleased with Presenting Percy and we are looking forward to running him."

Below can be found a selection of photographs of Presenting Percy at the yard of his trainer Pat Kelly in Athenry, County Galway.

NB: Images are free to use but please credit photographer Caroline Norris