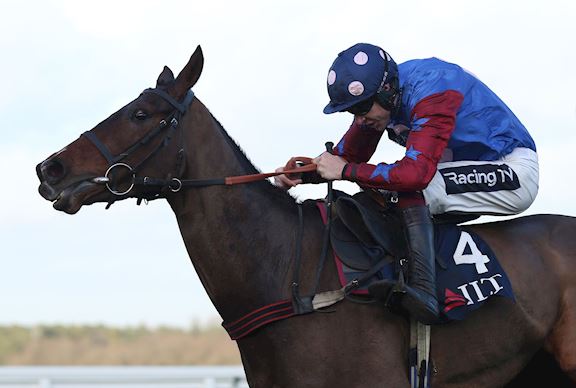 Festival stars on parade at The April Meeting next week

Tuesday, April 9, 2019 – Almost a month has passed since the successful conclusion of The Festival™ presented by Magners at Cheltenham Racecourse and racing returns to the Home of Jump Racing on Wednesday and Thursday, April 17 and 18, with The April Meeting.

Racegoers will have the chance to see two of the heroes from The Festival™ presented by Magners who will be parading at The April Meeting. Paisley Park was the hugely-impressive winner of the G1 Sun Racing Stayers’ Hurdle for owner Andrew Gemmell, Wiltshire-based trainer Emma Lavelle and jockey Aidan Coleman.

The seven-year-old is set to parade at 1.20pm on Thursday, April 18 and will be joined by G1 Ryanair Chase victor Frodon. Owned by Paul Vogt and trained by Paul Nicholls in Somerset, Frodon became the first G1 chase winner at The Festival to be partnered by a female jockey when he came home in front under Bryony Frost.

There are also 800 free Easter eggs up for grabs, so racegoers should arrive early as they are on a first come, first served basis. Children aged 18 and under are admitted for free when accompanied by a full-paying adult. The children’s activities and free Easter eggs are for children in the Club and Tattersalls enclosures.

The racing highlight at The April Meeting is the £60,000 G2 Cure Parkinson’s & Hambo Foundation Barchester Healthcare Silver Trophy Chase, a limited handicap staged over an extended two and a half miles on Wednesday, April 17.

Past winners of this contest include Norton’s Coin, Katabatic, Beech Road, Strong Promise, Seebald and Our Vic.

Robert Waley-Cohen has been Chairman of Cheltenham Racecourse since 2011 and is set to hand over the reins to Martin St Quinton at the end of the season.

Waley-Cohen is set to be represented at The April Meeting by the Nicky Henderson-trained novice hurdler Igor, who he owns in a partnership. The home-bred six-year-old by Presenting shaped with promise in two starts towards the end of 2018 at Ascot

The Cheltenham Gold Cup-winning owner is looking forward to being represented by Igor at The April Meeting in the opening race on Wednesday, April 17, the £20,000 Citipost Novices’ Hurdle over an extended two and a half miles.

Waley-Cohen revealed: “Igor is set to run at The April Meeting at Cheltenham on Wednesday, April 17.

“He was a good second on his first start at Ascot in November.

“At Ascot last time out, he didn’t run very well and was well beaten. However, he was found subsequently to be under the weather and Nicky has been very happy with him since.

“Good ground would suit him and we are looking forward to running him.

“He is a nice young horse and hopefully he can continue to improve with more experience in his races."

All racing at The April Meeting takes place on the New Course.