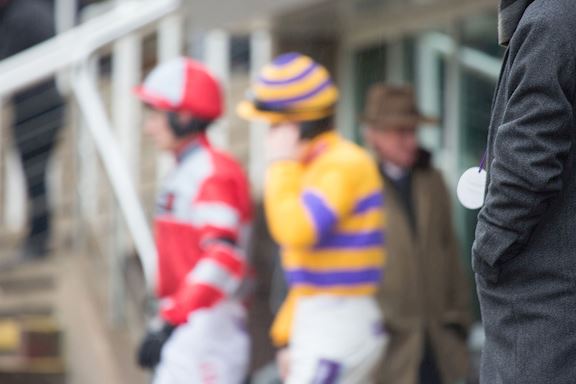 Friday, April 12, 2019 - The April Meeting continues on Thursday, April 18, with a seven-race card exclusively for fillies and mares, the only Jump raceday of its kind in the UK.

Among the highlights is the opening £25,000 Listed Glide Mares' Novices' Hurdle (2.05pm, 22 entries) over an extended two and a half miles, which could feature the 142-rated Posh Trish (Paul Nicholls).

Posh Trish has taken high rank among her own sex this season, landing Listed contests at Newbury and Taunton, though did not run up to her best when eighth in the G2 National Hunt Breeders Supported By Tattersalls Mares' Novices' Hurdle at The Festival™ presented by Magners on March 14.

That race was won by Eglantine Du Seuil and also featured Indefatigable (Paul Webber), who fared best of the British challengers in fifth.

Indefatigable finished second behind Posh Trish at Taunton in December and on her penultimate start was beaten a neck by Lady Buttons in a G2 event at Doncaster, both over an extended two miles.

Trainer Paul Webber said today: "Indefatigable is in good form and came out of The Festival very well.

"She got shuffled back a bit there because she didn't quite meet a couple of hurdles on the right stride, but she stayed on so well.

"She wasn't quite as quick with her jumping in certain parts of the race, which you have to be when you're travelling at that speed. But she finished well up the hill.

"She was flat out at Cheltenham, so we have been keen to step her up in trip and that will be the plan from now on.

"She is in two races on the Thursday and I think we would probably lean towards running in the Listed Glide Mares' Novices' Hurdle."

Having finished third in a Listed bumper at Navan in November, Caravation was just touched off on her first two attempts over hurdles, including behind last year's G1 Weatherbys Champion Bumper scorer Relegate at Naas in December.

The six-year-old, a full-sister to 2009 Irish Grand National hero Niche Market, defeated subsequent winner Great White Shark in a two-mile maiden hurdle at Navan on March 2 before stepping up six furlongs in distance to win a novices' hurdle at the same track on March 18.

Trainer Philip Dempsey reported: "Caravation is a possible runner at Cheltenham next week.

"She has come out of her latest start in good form and if the ground is OK, then it looks a good race to go for.

"Caravation has won her last two starts well and looks to be progressing with every run.

"If we don't go to Cheltenham, she could stay in Ireland and run at Fairyhouse."

Havingagoodtime (Henry De Bromhead IRE) is one of three Irish-trained entries and has not raced since finishing fourth behind Band Of Outlaws at Naas in February. The pick of the home challengers appears to be Miranda (Paul Nicholls), who looked a good prospect when winning her first two starts over hurdles at Ludlow and Wincanton.

Cap Soleil (Fergal O'Brien) could have her second outing of the campaign in the £25,000 Catesby Estates Plc Mares' Handicap Hurdle (3.15pm, 2m 4f 56y, 36 entries). A high-class novice last season, Cap Soleil returned over the course and distance in the G1 OLBG Mares' Hurdle at The Festival, finishing seventh behind Roksana.

The going at Cheltenham is currently Good to Soft. Conditions are expected to remain dry and become warmer.

There are also 800 free Easter eggs up for grabs, so racegoers should arrive early as they are on a first come, first served basis. Children aged 18 and under are admitted for free when accompanied by a full-paying adult. The children's activities and free Easter eggs are for children in the Club and Tattersalls enclosures.