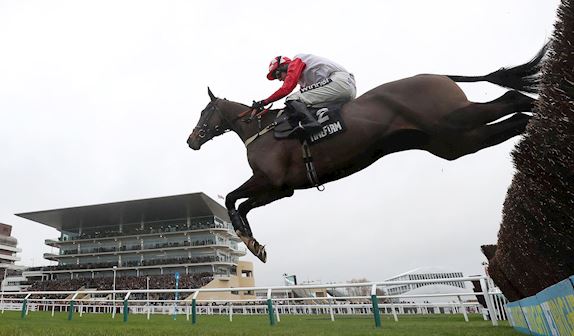 Thursday, April 11, 2019 – Racing returns to Cheltenham next Wednesday, April 17, day one of The April Meeting.

The seven-race programme is headlined by the £60,000 G2 Cure Parkinson’s And Hambo Foundation Silver Trophy Limited Handicap Chase (2.40pm, 26 entries), staged over an extended two and a half miles and won the past by top chasers Norton’s Coin, Katabatic, Beech Road, Strong Promise, Seebald and Our Vic.

Diego Du Charmil (Paul Nicholls), a G1 winner at Aintree in 2018, is the top-rated performer among the 26 entries with a rating of 155.

Nicholls, who looks assured of an 11th Jump trainers’ title this season, is the joint-leading trainer in the Cure Parkinson’s And Hambo Foundation Silver Trophy Chase with four successes. In addition to Diego Du Charmil, he could also be represented this year by Dolos, last seen when fifth in the G3 Greatwood Gold Cup at Newbury last month.

Highway One O One (Chris Gordon) is set for his third successive outing this season at the Home of Jump Racing.

Earlier in the campaign, Highway One O One scored on his chasing debut at Newton Abbot in September and also defeated more experienced rivals in a valuable two-mile graduation chase at Carlisle in November.

Chris Gordon, who trains near Winchester, said: “Highway One O One is in good order.

“The Festival went against us ground-wise. It bucketed down with rain beforehand. He got headed after the third last and I had told Tom [Cannon, jockey] to be easy on him once his chance had gone.

“He did not have a hard race there and I was looking forward to running him at Ascot a couple of weeks ago [March 31] but the ground was a little on the quick side. The April Meeting was plan B and, provided it is safe ground on the easy side of good, he will run.

“I would be very positive about his chance. He was pushed up to a rating of 145 after Festival Trials Day and that form has been franked with Kildisart winning at Aintree last week.”

Other contenders include Mister Whitaker, winner of the Listed Close Brothers Novices’ Handicap Chase at The Festival in 2018 and fourth in this season’s G3 BetVictor Gold Cup, Imperial Presence, who could return from a break having won three times last summer, and Kings Monarch (Kerry Lee), an easy winner of his latest two starts at Fontwell and Hereford.

Jenkins (Nicky Henderson) was a 151-rated performer at his best over hurdles and could revert to the smaller obstacles in the Kingston Stud Handicap Hurdle following four starts over fences this season.

Another Henderson-trained entry is Pym, who races in the same Patricia Pugh silks as the great Altior and was last seen when 11th in the Martin Pipe Conditional Jockeys’ Handicap Hurdle at The Festival.

Dingo Dollar (Alan King) is the likely top-weight in the Weatherite Handicap Chase, with the seven-year-old having took third on the valuable G3 Ladbrokes Trophy at Newbury earlier this season. G2 winner Vyta Du Roc (Nicky Henderson) and progressive mare The Bay Birch (Matt Sheppard) also feature among the entries.

The April Meeting continues on Thursday, April 18, with a seven-race programme exclusively for mares.

The going at Cheltenham is currently Good to Soft. Conditions are expected to remain dry and become warmer.

There are also 800 free Easter eggs up for grabs, so racegoers should arrive early as they are on a first come, first served basis. Children aged 18 and under are admitted for free when accompanied by a full-paying adult. The children’s activities and free Easter eggs are for children in the Club and Tattersalls enclosures