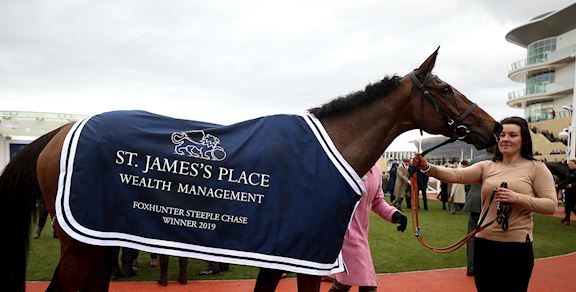 Hazel Hill among entries for Cheltenham's season finale on Friday

Race Night, Cheltenham's only evening fixture, is one of the highlights of year for amateur jockeys and trainers, with a seven-race card made up entirely of hunter chases.

Run over an extended three and a quarter miles (3m 2f 70y), the Timico Mixed Open Gold Cup Final Hunters' Chase is the culmination of a 14-race series across the country. In order to qualify for the final, horses need to have finished in the first three of any of the Timico-sponsored qualifiers or have won a men's, ladies' or mixed open point-to-point.

Trained by Philip Rowley, Hazel Hill appears better than ever at the age of 11 after maintaining his 100 per cent record under Rules with a decisive victory in the St James's Place Foxhunter Chase over the course and distance at The Festival™ presented by Magners on March 15.

Hazel Hill is now unbeaten in four attempts under Rules and has been successful in 11 of his last 12 starts in point-to-points.

Rowley also has prolific pointer Optimised in the race as the Shropshire-based handler eyes his third straight victory in the Timico Mixed Open Gold Cup Final Hunters' Chase, having captured the two latest editions with Barel Of Laughs.

The entries also include Virak (Rose Loxton), a smart chaser for Paul Nicholls in his prime, who has won all five of his starts under both codes this season, including hunter chases at Ascot and Ludlow.

Thetford trainer David Kemp is set to be represented by the improving Caryto Des Brosses. The unexposed seven-year-old captured a novices' hunter chase at Stratford on his Rules debut in June, 2018, and has returned this year with two commanding victories in open point-to-points at Garthorpe on March 24 and Fakenham on April 14.

Kemp said today: "At this stage, Caryto Des Brosses is an intended runner on Friday. He has won a couple of points this year and is ready for a step up in grade.

"He was not fully ready for his comeback at Garthorpe, as he had a few problems earlier in the season, and yet he still won almost on the bridle.

"Then when he ran at Fakenham the other day, he had one half decent rival to beat, which he dismissed without coming off bridle and that suggested to me that he had come forward from Garthorpe.

"We are under no illusions that he is going to be against better horses on Friday, but he is a young horse who looks to be improving."Previously, I would have been worried about the step up to three and a quarter miles, but actually he is finishing his points over three miles very well now, which is probably down to him getting stronger.

"Although it was only a three-runner race at Fakenham, I doubt they will be going a stronger gallop at Cheltenham than they did there - they went a proper gallop and he won on the bridle.

"Ultimately, you don't really know until you try and we are prepared to have a go."

Fellow seven-year-old Path To Freedom (Cherry Coward) is another entry to note, having been narrowly beaten in a novices' hunter chase at Catterick on March 6.

Master Baker (Lisa Jefford) has also performed at a high level this year, taking hunter chases at Taunton and Newbury.

BBC Radio 1's Greg James will be performing a live DJ set after racing in The Centaur from 8.30pm to 9.50pm.

The going at Cheltenham is currently Good (watering to maintain).

The forecast is predominantly dry and warm, with a little rain possible midweek.