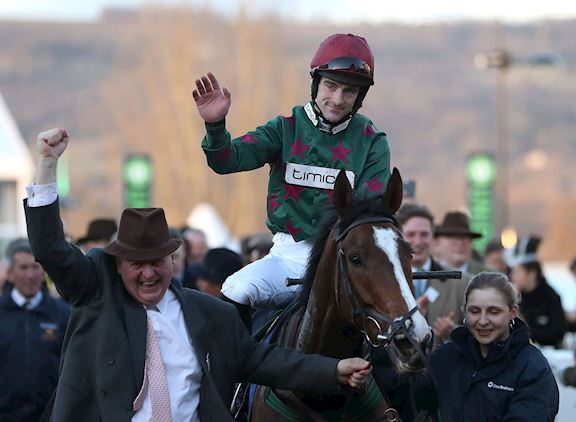 The limited handicap chase, run over an extended two and a half miles, has been won by top chasers Norton's Coin, Katabatic, Beech Road, Strong Promise, Seebald and Our Vic.

Trainer Dan Skelton has his string in fine form as he closes in on a remarkable 200 winners for the season. The Warwickshire handler is represented by Rene's Girl (Harry Skelton, 11st 4lb), who has been kept fresh since finishing second to Lady Buttons in a Listed mares' chase at Doncaster on December 29.

Rene's Girl was a high-class novice chaser last season, winning Listed events at Doncaster and Huntingdon before ending the campaign with a fine second behind Finian's Oscar in the G1 Manifesto Novices' Chase at Aintree.

Skelton, who sent out his 193rd winner of the campaign at Hexham yesterday, said:

"This is Rene's Girl's first run in a handicap over fences, but we have kept her back for this race.

"The form of her run at Aintree last season is strong and the ground tomorrow will be perfect.

"It is a competitive race, as you would expect, but she is ready to go."

Top-weight Imperial Presence (Philip Hobbs/Richard Johnson, 11st 10lb) is another coming off a break, having not been seen out since finishing second in a handicap chase at Perth in September. That came on the back of three straight wins at Kempton Park, Stratford and Uttoxeter.

Mister Whitaker (Mick Channon/Jonathan Burke, 11st 9lb) has been fitted with first time cheekpieces in an attempt recapture that form that saw him land the Listed Close Brothers Novices' Handicap Chase at The Festival™ presented by Magners in 2018.

Others to consider include promising novices Highway One O One (Chris Gordon/Tom Cannon, 11st 5lb) and Wenyerreadyfreddie (Nicky Henderson/Nico de Boinville, 11st 8lb), who are both aiming to bounce back from disappointing efforts but had strong form on their penultimate starts.

The nine runners are completed by the other mare in the field Got Away (Oliver Sherwood/Leighton Aspell, 10st 11lb) and lightly-raced 11-year-old Tiquer (Tim Vaughan/Tom O'Brien, 10st 4lb), who is having his first start since undergoing a wind operation.

Dan Skelton has two other runners on the card - No Hassle Hoff (Daryl Jacob, 10st 12lb) drops down in trip after a wind operation for the £25,000 Kingston Stud Handicap Hurdle (3.15pm, 15 runners) over an extended two and a half miles, while Cobra De Mai (11st 7lb, Harry Skelton) tackles three and a quarter miles for the first time in the £25,000 Weatherite Handicap Chase (5.00pm, nine runners).

The trainer added: "No Hassle Hoff will have a little chance, I am sure, whereas Cobra De Mai can be a little bit in and out.

"On a good day, Cobra De Mai can be competitive anywhere, but he is his own master, so we will see how he goes."

Nicky Henderson has won four of the last six renewals of this race, most notably with star chaser Might Bite in 2015. The Lambourn trainer bids to extend that excellent record with Mill Green (Nico de Boinville), who finished fourth in the G3 EBF Novices' Handicap Final at Sandown Park last month.

First Assignment (Ian Williams/Tom O'Brien, 11st 10lb) is going for his third course victory on the campaign in the £20,000 Safran Landing Systems Handicap Hurdle (4.25pm, 16 runners, 2m 7f 213y), having already triumphed at The Showcase and The November Meeting.

The action is completed by the £18,196 Arkells Brewery Nicholson Holman Chase (3.50pm, 13 runners), a novices' limited handicap over just shy of three and a quarter miles, and the concluding £15,752 Cheltenham Pony Racing Authority Graduates' Handicap Hurdle (5.30pm, 14 runners, 2m 179y), which is restricted to conditional and amateur jockeys.

The April Meeting continues on Thursday, April 18, with a seven-race programme exclusively for mares.

The going at Cheltenham is currently Good.

There are also 800 free Easter eggs up for grabs, so racegoers should arrive early as they are on a first come, first served basis. Children aged 18 and under are admitted for free when accompanied by a full-paying adult. The children's activities and free Easter eggs are for children in the Club and Tattersalls enclosures.