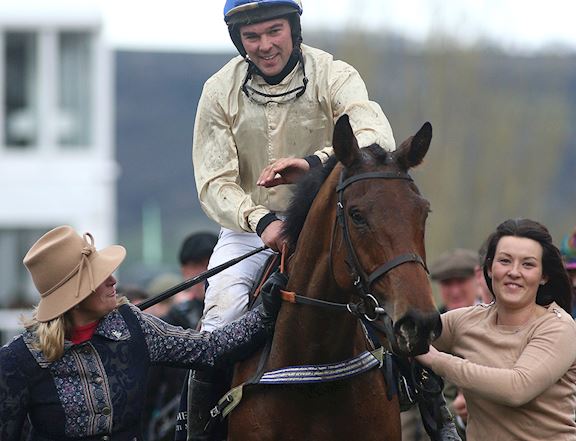 The popular Race Night, Cheltenham's only evening fixture, is one of the highlights of year for amateur jockeys and trainers, with a seven-race card made up entirely of hunter chases followed by live DJ set from BBC Radio 1's Greg James in The Centaur.

Rowley's stable star Hazel Hill (Mr Alex Edwards) faces six rivals in the feature £25,000 Timico Mixed Open Gold Cup Final Hunters' Chase (6.50pm, 3m 2f 70y), the culmination of a 14-race series across the country. In order to qualify for the final, horses need to have finished in the first three in any of the Timico-sponsored qualifiers or have won a men's, ladies' or mixed open point-to-point.

The 11-year-old Hazel Hill, a prolific point-to-pointer, proved himself the best hunter chaser on either side of the Irish Sea with a commanding four-length victory in the St James's Place Foxhunter Chase over the course and distance at The Festival™ presented by Magners on March 15.

Hazel Hill is now unbeaten in four attempts under Rules and has been successful in 11 of his last 12 starts in point-to-points.

The opposition is led by Virak (Rose Loxton/Miss Natalie Parker), who has won his two latest hunter chase starts at Ascot and Ludlow, and Master Baker (Lisa Jefford/Mr Bryan Carver), successful at Newbury on his penultimate outing.

Seven-year-old Caryto Des Brosses (David Kemp/Mr Dale Peters) is the unknown quantity, having captured a novices' hunter chase at Stratford on his Rules debut in June, 2018, before returning this year with decisive victories in open point-to-points at Garthorpe on March 24 and Fakenham on April 14.

Rowley, who has captured the last two runnings of the race with Barel Of Laughs, commented today: "Hazel Hill was very pleased with himself after The Festival and seems in very good form.

"He had an entry at Punchestown this week, but we walked the course at Cheltenham yesterday and it was beautiful ground, just on the easy side of Good, plus the horse has only ever been under Rules four times in his life, so we took the option to stay here.

"I would rate Virak as the main danger, even though it did not look like he was going to run here. He is a very good horse and hopefully it will make up into a good race."

The Shropshire handler's other runners on the card are Salvatore in the £8,000 Connolly's Red Mills Intermediate Point-To-Point Championship Final Hunters' Chase (5.40pm, 15 runners, 3m 2f) and Optimised in the £6,500 Are You Well, I Thought You Were Open Hunters' Chase (7.50pm, 20 runners, 4m 97y). Alex Edwards also takes the ride on both horses.

Six-year-old Salvatore makes his Rules' debut, having won three of his four point-to-point starts in 2019, while the year older Optimised steps up to four miles for the first time after narrowly defeating former high-class performer Unioniste in a hunters' chase over three miles at Bangor on March 23.

Rowley reflected: "I hope Salvatore takes to the course because I think he will definitely stay the three and a quarter miles - I actually think he will really like the hill as well.

"I would be quite hopeful about him, but he has never raced under Rules and has a lot to learn in that respect.

"Optimised won a hunter' chase at Bangor and beat some nice horses there. He would not be the quickest horse and I think he just stays forever. The four miles around Cheltenham should really suit him."

Cheltenham's seven-race programme on Friday starts at 5.05pm and ends at 8.20pm, with the Gates opening at 3.30pm.

BBC Radio 1's Greg James will be performing a live DJ set after racing in The Centaur from 8.30pm to 9.50pm.

The going at Cheltenham is currently Good (selective watering to maintain).

A few showers are forecast today. Friday is expected to be dry.