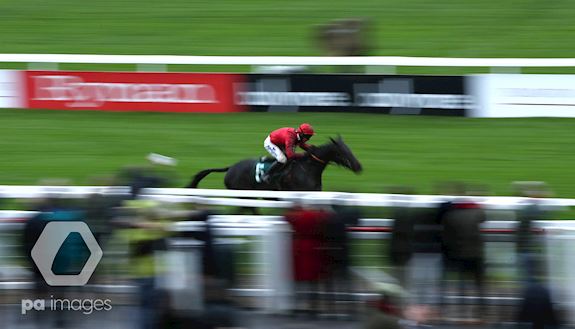 All the news from day two of The Showcase

Cheltenham's first meeting of the new season, The Showcase, continued on Saturday, 26 October, with a seven-race card that ran from 2.00pm through to 5.30pm.

Following significant rainfall, racing started on ground described as Soft, Heavy in places, with the third last fence omitted from the three chases. The going was changed to Heavy after the opening race. Below can be found a report on all the action.

Racing returns to Cheltenham with The November Meeting from Friday, 15 November to Sunday, 17 November inclusive.

Race replays for both days of The Showcase can be found online at https://www.thejockeyclub.co.uk/the-racing/race-replays/

The Conditional (14/1, 10st 4lb) revelled in the testing conditions to record a first victory over fences on his eighth chase appearance. The seven-year-old, who joined local trainer David Bridgwater from the Irish stables of Martin Hassett over the summer, took up the running jumping the final fence before being driven out by Tom Cannon to beat 4/1 favourite West Approach by a length and three-quarters. Cogry (6/1), who made much of the running, took third, a further two lengths in arrears.

David Bridgwater commented: "I think that when The Conditional gets to the front, he idles a bit. I was quite surprised because he ran really well at Worcester and I thought he was pretty straight, but he has come on so much for that race. He must have been only half-fit that day.

"It's a great result and great for the owner, Mr Cave. He has been in the game all his life and bless him. A good friend of mine found The Conditional for us in Ireland and it's quite rare that he is still a novice because he has been running in some great races.

"He is entitled to win a race like this because he has been knocking on the door in Ireland and I think that he will hopefully improve with a bit of age. He could end up being a Welsh National-type of horse."

Tom Cannon said: "It's tough going. We are splashing through a lot of water and it's obviously on the heavy side. I got a great ride from The Conditional and he handled the conditions. He jumped well and it was one of those races when everything went right from start to finish.

"David Bridgwater told me not to be in front too soon and I was probably in front a touch longer than I would have liked but I am just delighted to win. It's not often that I get a chance on a day like this and it is great."

Shouldered with an 8lb penalty for his Chepstow success, the Paul Nicholls-trained hurdler raced wide throughout under Harry Cobden but looked to be in trouble as 4/5 favourite Torpillo went on after the penultimate flight.

Quel Destin rallied to hit the front soon after jumping the final flight and stayed on bravely up the hill to score by three-quarters of a length over Soviet Pimpernel (7/1), with another half-length back to Torpillo.

Paul Nicholls said: "All of our horses are just needing a bit of a run this year, which is of no harm, and Quel Destin had a lovely run on the Flat the other day at Bath. That brought him forward - I went to Bath not to win the race but to have a prep run to put him right for today. All the rain helped him and, with an 8lb penalty, it was a brilliant run.

"If he keeps progressing, he wouldn't be unlike Rigmarole, who ended up winning The International here. We might have a look at something like that. He progressed all last season and I think he will keep progressing now. He is tough and he stays - it just shows the benefit of a run makes a huge difference to horses.

"We said that we would go wide with our horses today. Ruby [Walsh] always used to do it and Harry said in the car coming up that was exactly what he was going to do. It's as good a place to be as any and it was a very good ride."

Harry Cobden said: "I ran around the course beforehand and Paddy Brennan rode three winners here last November by going wide on heavy ground, so I thought that we would go our own route and try our luck.

"Quel Destin had a penalty today, so has done really well to win. He had a nice run on the Flat the other day, which put him right, and I am delighted with him. We were a bit long down to two out but he puts his little head down, sticks his neck out and tries really hard."

Harry Whittington recorded a first Cheltenham victory as Saint Calvados (5/2 fav), who twice placed at G1 level over fences last season, capitalised on a return to handicap company. The top-weight (11st 12lb) collared long-time leader Knocknanuss (11/2) jumping the final fence and rallied well up the run-in for Gavin Sheehan to prevail by a length over Vaniteux (20/1), who was receiving just over two stone from the winner.

"We knew there was plenty of pace on and plenty of trailblazers. I had a little bit of a ding-dong with Gavin beforehand because I thought he said that he was going to drop him out but he was half winding me up. As it happened, it all worked out perfectly and he gave the horse a beautiful ride. He is a huge talent and it's great to have him on board.

"I have no idea where we will go with Saint Calvados. He obviously had a long break in the summer and had his wind done. We felt that we would take the first run in and then sit down and go through it. We will see how he comes out of the race before we start thinking ahead."

Gavin Sheehan said: "I jumped the first two fences lovely and, after that, his jumping got a little bit sticky on the ground. When I was long, I was almost having to try and lift him up over them.

"To be fair, he hacked in a few places and I thought we were going quick but we can't go any quicker. He loved the ground out there - he went down and winged the last but just stopped at the back of it and pricked his ears a little bit. As soon as the other horse came to me, he put his head down and fought all the way to the line.

"Harry and his team have got him here ready for the day and they have picked a brilliant race for him with lovely ground conditions. He was our stand-out horse and it is lovely for them to start off the season again with dreams."

Tobefair (8/1, 11st 12lb) captured a handicap hurdle at The April Meeting and picked up where he left off last season with a battling effort under top weight. Debra Hamer's stable star, who was also runner-up in the G3 Pertemps Network Final at The Festival™ presented by Magners, headed Sykes (5/1) shortly after the final flight and battled resolutely to see off Sunset Showdown (11/1) for a half-length win.

Debra Hamer said: "I am speechless. We have had a lot of rain - we know Tobefair handles the soft because he ran a great race on it at Warwick - and we just haven't got to the bottom of him. What an amazing horse to train and I am so proud of him."

Tom Bellamy said: "Tobefair is a brilliant horse and his record speaks for itself. His second at The Festival was a complete shock to everyone. Of course, we would have loved to have won that day but it was still a fantastic effort.

"He won here in April and, to come back today on ground that is probably not right up his street, what a performance. He had top weight and was racing off his highest ever mark. We are going to have to start looking at some races outside of handicaps now.

"He is a sort of people's favourite. You will hear the reception he gets from all his owners when we go back in and it is testament to a very small yard. Debra, Paul and the whole team do such a good job with what they have got. Fair play to them."

Leading staying-chaser Ramses De Teillee (8/11 favourite) made his first appearance over hurdles in two years a winning one when making all for a comfortable victory under Tom Scudamore. The David Pipe-trained seven-year-old, second in last season's G3 Welsh Grand National, wandered up the run-in but had plenty in reserve to beat The Butcher Said (7/2) by four and a half lengths.

Slate House (3/1) had looked a potential superstar when taking a pair of novice hurdles at Cheltenham in the autumn of 2017 and the seven-year-old regained the winning thread with an impressive display. The Colin Tizzard-trained son of Presenting travelled strongly into the race turning for home and stayed on powerfully for Robbie Power to score by 11 lengths over Garo De Juilley (8/1).

Time Flies By (13/2) made an exciting debut in the famous JP McManus colours. The four-year-old, representing the powerful Nicky Henderson yard, travelled ominously well throughout under Barry Geraghty and readily picked up Butte Montana (11/4f) in the closing stages for a cosy length and three-quarter success.