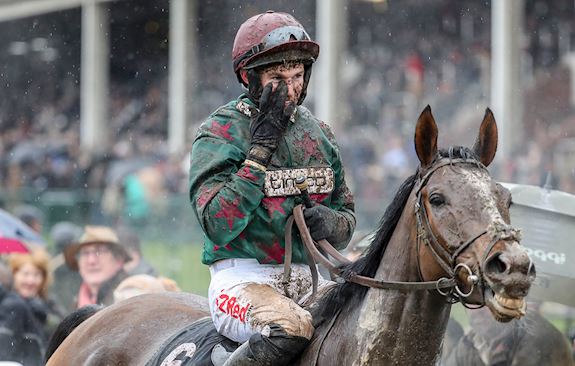 The £100,000 Unibet Greatwood Hurdle is the highlight of the third and final day of The November Meeting, Sunday, 17 November and has attracted 42 entries for its 2019 renewal.

Staged over an extended two miles, the Unibet Greatwood Hurdle boasts a fabulous roll of honour featuring the likes of future Unibet Champion Hurdle winners Celtic Shot and Rooster Booster, plus Sizing Europe, who went on to enjoy such a stellar career over fences.

Heading the market at 9/1 with sponsor Unibet is Sebastopol (Tom Lacey). The lightly-raced five-year-old was a smart bumper performer two seasons ago and, after a curtailed campaign in 2018/19, returned with a very impressive seven-length success in a handicap hurdle at Wincanton on 17 October.

Fusil Raffles has won both his starts since joining Nicky Henderson, most recently taking a G1 juvenile contest at Punchestown in May, while Monsieur Lecoq landed the Welsh Champion Hurdle on his return to action at Ffos Las on 19 October. Henderson has eight entries in total, with the pick of his other entries including Adjali (14/1) and Rathill (14/1), both very useful novices last season, as well as Brain Power (16/1), who captured the G1 Grand National Hurdle at Far Hills, USA, on 19 October.

A horse already on the scoresheet at the Home of Jump racing this season is Quel Destin (Paul Nicholls, 11/1), who landed the Masterson Holdings Hurdle at The Showcase on 26 October. The 11-time champion Jump trainer looks to hold a strong hand in the Unibet Greatwood Hurdle with his six entries also including recent impressive Wincanton winner Ecco (14/1), who was sixth in the G1 JCB Triumph Hurdle at The Festival™ presented by Magners, as well as G1-placed Christopher Wood (20/1) and exciting four-year-old Red Force One (20/1).

Another contender already a winner at Cheltenham this season is Benny's Bridge (Fergal O'Brien, 33/1), who sauntered to an eight-length success in the Matchbook Betting Exchange Podcast Conditional Jockeys' Handicap Hurdle over an extended two miles at The Showcase on 25 October.

Gloucestershire-based O'Brien said: "It was always the plan to run Benny's Bridge at Cheltenham last weekend and I was delighted with the way he did it.

"He is a lovely horse and he likes Cheltenham, so the Unibet Greatwood Hurdle is something we will consider."

Wiltshire handler Alan King took the honours in the Unibet Greatwood Hurdle two years ago with Elgin and has two entries this year including Harambe (33/1), a useful novice who won at Kempton Park and Market Rasen in the spring and came home seventh in the G2 Unibet Persian War Novices' Hurdle on his return to action at Chepstow on 11 October.

King said: "Harambe has come out of Chepstow in good form.

"He was not fully wound up for that contest and he got a bit tired on the ground, having been a bit too fresh.

"The gap between Chepstow and Cheltenham suits nicely and he is a horse that I have in mind for the Greatwood.

"He will come on for that race and hopefully there is more to come this season."

There have been three Irish-trained winners of the Unibet Greatwood Hurdle, most recently Sizing Europe in 2007. There are six Irish-trained contenders this year, with a trio from Ireland's champion Jump trainer Willie Mullins - La Sorelita (25/1), Janidil (25/1) and Allez Dance (33/1).

Weights for the Unibet Greatwood Hurdle will be revealed on Wednesday, November 6.

Ed Nicholson, Head of Unibet racing sponsorship & communications said: "We are delighted with the quantity and quality of entries for this season's Unibet Greatwood Hurdle, which includes eight from the powerful Unibet-sponsored stable of Nicky Henderson. It's incredible to think Nicky has yet to win this race, given the ammunition he has had in years gone by, but this season his entries include the likes of recent US Grand National hero, and past winner of the Unibet International Hurdle, Brain Power.

"The Unibet Road to Cheltenham series of six races is undoubtedly the most informative set of races in regards to the Unibet Champion hurdle, and this season the Unibet Greatwood hurdle forms part of a wonderful opening weekend with the G1 Unibet Morgiana on Saturday, 16 November kicking things off from Punchestown."