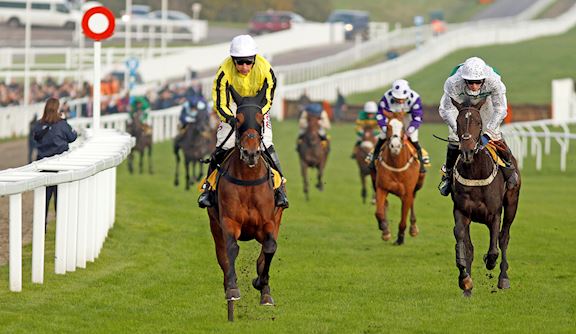 ALLMANKIND IS HEAVEN-SENT FOR SKELTON

Trainer-jockey brothers Dan and Harry Skelton have an exciting JCB Triumph Hurdle prospect on their hands after Allmankind ran out an eye-catching winner of the G2 JCB Triumph Trial Juvenile Hurdle.

The well-bred son of Sea The Moon, who moved to Dan Skelton's yard from Michael Bell's Newmarket base earlier in the autumn, was an 11/4 chance and beat Botox Has by two and a half lengths. He made a winning debut over hurdles eight days ago at Warwick.

"I thought this was possible - I wouldn't say probable - but I was really impressed with him at Warwick. He was keen here, but I can tell you he's a lot worse at home!" said Dan Skelton. "I just said to Harry, and to Tim [Gredley] who owns him, 'there's no point running this horse in another Mickey Mouse race because he's hard on himself at home. There's no point galloping at home because he's so hard on himself - we may as well just go to the races'.

"Tim said to me that there was a point when he was a two-year-old when they thought he wasn't far off Derby standard, but then he just got keener and keener. I think the ability has always been there. I wouldn't call him fragile-minded, because he's not, but he is bull-headed, as you can see. But juveniles, to keep going in those conditions, you need to be quite strong-headed.

"I'm delighted with that. He's shown us what he can do now and I won't be in a hurry to get him out and find out what he can't do. We'll just go a little bit steady now and treat him with the respect he deserves.

"Obviously we will aim to come back here in March. He's good enough to have a place in that [the JCB Triumph Hurdle], and he's tough - nothing will get to him in the meantime, if that makes sense. I can't see why he needs more experience and that type of thing, so we can just plan backwards from there. I should imagine one race before then."

Asked whether the occasion might get to him at The Festival, Skelton replied, "To be honest with you, he could boil over at a one-man party. The FA Cup Final wouldn't stress him anymore than a one-man party."

Not many horses can pull like a train for two miles around Cheltenham in heavy ground and still win impressively. However, Allmankind (11/4) defied those odds this this afternoon with a sensational success in the £32,000 JCB Triumph Trial Juvenile Hurdle.

Trained by Dan Skelton and ridden by his brother Harry, Allmankind made all the running in the G2 event to remain unbeaten over hurdles.

The three-year-old son of Sea The Moon kept on resolutely up the punishing Cheltenham hill to record a two and a half-length success and earn a quote of 20/1 with BetVictor for the G1 JCB Triumph Hurdle at The Festival in March.

Winning rider Skelton said: "That was an impressive performance from Allmankind.

"He is a horse who always has had a tendency to pull like that, but he stayed on really well and you have to be delighted with the manner in which he has won.

"We are a long way from the Triumph Hurdle at the moment, but he has put his ability down and showed that he is a very nice horse.

"It's great to have a winner for the Gredleys too who have been good supporters of ours."

PLENTY OF POSITIVES FROM BOTOX HAS DEFEAT

Connections of highly-regarded French import Botox Has (11/4) might have been disappointed at being beaten into second by the heavily-backed Allmankind (also 11/4), who scored by two and a half lengths, but they learned plenty and they were far from despondent.

Jockey Josh Moore said: "I think a lot of him, but the winner went hard and had me out of my comfort zone. I thought I'd be able to peg him back but I couldn't quite get to him and maybe his more recent run helped.

"Mine left his back-end in one early on, but I think that was just because we were going quick in bad ground."

Trainer Gary Moore said: "Josh gave us one of the longest debriefs ever, but he was worth listening to. Some jockeys come back and talk a load of rubbish, but Josh was very interesting. It was only his second run for us and we learned more today about Botox Has than we had when he won at Fontwell.

"I'm very pleased with him but I think next time we'll try to go to a more conventional racecourse. We'll have a look, but he probably wants to go to Newbury or Doncaster, or somewhere like that. I think there might be a nice race at Doncaster next month, but we'll see."

An exciting young talent confirmed his promise when making all in the G2 JCB Triumph Trial Juvenile Hurdle, but there was no disgrace in the effort of placed horses Botox Has and Repetitio.

Allmankind (11/4), whose performance was bordering on tearaway, galloped clear of his rivals but still won by two and a half lengths from Botox Has (11/4) with Repetitio (33/1) another seven lengths behind.

David Noonan, who rode the Nigel Hawke-trained Repetitio, said: "I followed the leader everywhere and when my fellow jumped two out very well I knew he would keep going, which he has done in previous races.

"He did so again today, but the winner is a nice horse - to make all in that ground. Being just behind him is no disgrace. My horse is very nice, he handled the ground and ran well so he is a nice prospect."

Neil King saddled fourth-placed Nordano who was ridden by Bryony Frost. King said: "He's not very quick and needs the mud to slow everything else down, but on the run-in he was staying on all the way to the line. He's tough as old boots, and while he doesn't have the class of the winner he kept trying. He'll go to Chepstow now on Welsh National Day for the big juvenile hurdle [the G1 Finale] which is worth £100,000."