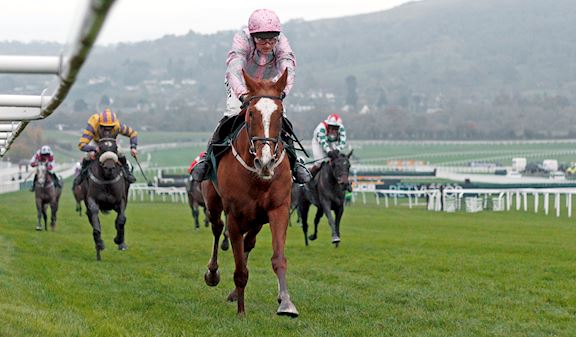 The 16/1 shot ran on strongly to score by two lengths, defeating 4/1 shot Legends Ryde in second in the extended two-mile event.

De Boinville said: "That was a good performance from Urban Artist.

"She has really showed how tenacious and tough she was, as she really had to battle there.

"I think good to soft ground will be more ideal for her, but she handled that.

"The ground staff have done a great job with the track. Apart from the odd patch, the ground is in great condition so it's great to be here and be racing."

Legends Ryde and Lady In Hiding both found two-length winner Urban Artist (16/1) too strong in the closing stages of the mares' bumper, but its Listed status conferred all-important black type and both trainers were more than happy.

Jamie Snowden, trainer of Legends Ryde (4/1), said: "She's run her heart out and she's not really a bumper horse - she's a chaser for down the line. A win would have been wonderful, but we came here looking for black type and she's got it.

"I always say that if you come here and turn left into the winner's enclosure it's like turning left on an aeroplane - you know you've done well."

Oliver Sherwood, who saddled Lady In Hiding (7/1), said: "She's third in a Listed race and so she's got black type. She doesn't have to do anything now.

"She's so tough and she didn't cost a lot. They are a lovely bunch of lads who own her and they are delighted."

Race 1 - 12:05pm G2 Ballymore Novices' Hurdle - Henry de Bromhead was fined £140 as the record of vaccinations in the passport of DANCING ON MY OWN (IRE) did not comply with the Rules of Racing. The performance of I K BRUNEL, which finished eighth, was considered. Olly Murphy's explanation that the gelding was unsuited by the going, which was officially described as Soft, Heavy in places on this occasion, and would prefer a quicker surface was noted. I K BRUNEL was routine tested. Following the race, Paddy Brennan reported that CHAMPAGNE WELL (IRE), placed second, stumbled approaching the second last hurdle.

Race 3 - 1:15pm mallardjewellers.com Novices' Chase - Following the race, David Bass reported that MINELLA WARRIOR (IRE), which was pulled up, was never travelling and jumped poorly and Kim Bailey reported that the gelding was unsuited by the going, which was officially described as Soft, Heavy in places on this occasion, and would prefer a quicker surface.

Race 5 - 2:25pm G3 BetVictor Gold Cup Handicap Chase - SPRINGTOWN LAKE (IRE) wore ear plugs which were removed at the start. Barry Geraghty, the rider of BRELAN D'AS (FR), placed second, was suspended for 2 days for using his whip above the permitted level from approaching the final fence. The performance of SPIRITOFTHEGAMES (IRE), which was pulled up, was considered. Dan Skelton could offer no explanation for the gelding's performance. SPIRITOFTHEGAMES (IRE) was routine tested. Following the race, Lizzie Kelly reported that SIRUH DU LAC (FR), which was pulled up, was never travelling. Richard Johnson reported that SPRINGTOWN LAKE (IRE), which was pulled up, was never travelling and Philip Hobbs reported that the gelding jumped poorly. The Veterinary Officer reported that US AND THEM (IRE), placed seventh, lost its right hind shoe and COUNT MERIBEL, placed sixth, lost its left fore shoe.

Race 6 - 3:00pm Listed Spinal Injuries Association Big Buck's Handicap Hurdle - TOBEFAIR wore ear plugs which were removed at the start. The winner, GOLAN FORTUNE (IRE), appeared to show improved form compared with its previous run at Cheltenham on 25 October 2019 where the gelding finished fourteenth of seventeen, beaten by 19 ½ lengths. Phil Middleton's explanation that the gelding had been off for over a year prior to its previous run and appreciated the Soft, Heavy in places going today was noted. GOLAN FORTUNE (IRE) was routine tested.

Race 7 - 3:30pm BetVictor Intermediate Handicap Hurdle - Permission was given for JACAMAR (GER) to wear a hood in the Parade Ring and for CONRON (IRE) to be mounted on the chute.

Race 8 - 4:00pm Listed Karndean Designflooring Mares' Standard Open NHF Race - URBAN ARTIST, trained by Hughie Morrison was late in the Parade Ring, due to receiving the saddle late and the filly then being difficult to saddle. Following the race, Anthony Honeyball reported that MIDNIGHT CALLISTO, unplaced, was unsuited by the going, which was officially described as Soft, Heavy in places on this occasion, and would prefer a quicker surface.