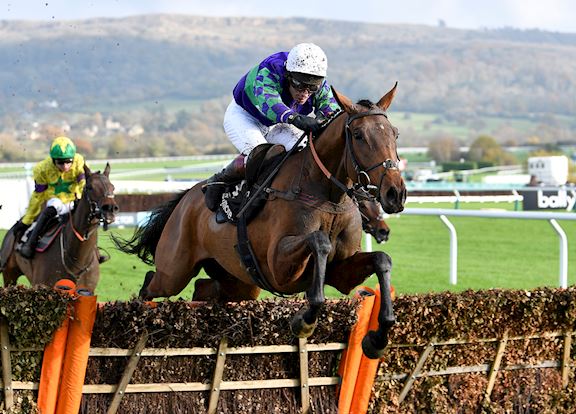 Philip Hobbs will plot a course towards The Festival after his number one novice hurdler Thyme Hill followed up last month's win in the Persian War Novices' Hurdle at Chepstow by beating Champagne Well by three lengths in the G2 Ballymore Novices' Hurdle.

The Ballymore Novices' Hurdle, over an intermediate distance, is the obvious target for him in March, and Hobbs completed that double with Massini's Maguire in the 2006/07 season, but on good ground the longer Albert Bartlett Novices' Hurdle would also come into strong consideration.

In the meantime, next month's G1 Challow Hurdle at Newbury is likely to be on the agenda for the five-year-old, who Hobbs said is more robust than last season but would still not want too much racing.

Hobbs said: "I suppose the obvious race for him is the Challow Hurdle at Newbury, and I should think that's where we'll be going next. He had a hard race today though, and he's not a horse you would want to be running every week."

He added: "He's very much to the fore among my novices. He's not the biggest in the world, but he's very tough and genuine, and he's got a very good outlook. I wasn't too concerned about the ground as his best two runs, at Chepstow and The Festival (when third in the G1 Weatherbys Champion Bumper), were on soft ground.

"He's very professional and he jumped fantastically well at Chepstow, and very well in the second half of the race here. I think two miles and five is a minimum for him, and if it was good ground here in March we might step up to three miles."

THYME FOR ANOTHER JOHNSON WINNER

The 11/8 favourite, a five-year-old son of Kayf Tara, was impressive, finishing three lengths ahead of second-placed Champagne Well

Johnson said: "It's as wet as you get round here. We didn't go that quick early and I was quite keen to go forward about going down that hill, and to be fair to him he came alive when we hit the front and jumped the last two very nicely.

"Hopefully he's a very decent horse and it's lovely to come here and do that.

"He's a two and a half to three-miler - he'll be a three-mile chaser in time - but, depending on ground conditions at the moment, two and a half is a sensible thing to stay at. You don't want to bottom him too early in the season.

"I think Philip said the [G1] Challow Hurdle is an obvious target and he will be keen to come back here in March for one of the races at The Festival; I presume he will have entries in both the staying novice hurdles, and we'll go from there."

Gloucestershire trainer Fergal O'Brien was delighted with the performance of Champagne Well, who finished second in the opening race at this year's Cheltenham November Meeting, the G2 Ballymore Novices' Hurdle.

Champagne Well (5/1), who was ridden by Paddy Brennan, was outgunned by 11/8 favourite Thyme Hill, who won by three lengths, and there was another three-quarters of a length back to third-placed Happygolucky (10/1), who is trained by Kim Bailey and was ridden by David Bass.

O'Brien, who recently moved to a new base in the Cotswolds village of Withington, said: "It was a very good run from our lad - we just got beaten by a better horse. I suppose we were very lucky in that we wouldn't have beaten Thyme Hill in the Persian War [run at Chepstow, but instead Champagne Well ran in and won the G2 Ballymore Novices' Hurdle run at The Showcase] at level weights because we couldn't beat him today getting 2lb.

"Paddy said our horse did everything right, he jumped the last well and he thought he was going to go and pick up Thyme Hill, but he picked up too. We were beaten by a very good horse and a very good trainer.

"It's lovely for us that this horse likes Cheltenham - most of the owners are local-ish. It's lovely to come here and be competitive, and today he went down to the last looking like he could win it.

"We could run that race another ten times and not win it.

"We might come back here in December for a race over two miles and seven furlongs. He's such a tough horse he would cope with that."

Richard Johnson, partnering the three-length winner Thyme Hill, said: "It's as wet as you get around here."

Paddy Brennan, aboard second-placed Champagne Well, said: "It is heavy."

David Bass, rider of the third-placed Happygolucky, commented: "It is heavy."

Gavin Sheehan, partnering fourth-placed Some Day Soon, remarked: "It is very testing out there."

Liam Gilligan, rider of Born By The Sea (5th), commented: "It is very testing, particularly at the top of the hill."

Aidan Coleman, jockey of Dancing On My Own (6th), said: "It is heavy ground."

Robbie Power, rider of L'Air Du Vent (7th), commented: "It is heavy across the track and it is particularly testing at the top of the hill."

Adrian Heskin, partner of I K Brunel (8th), remarked: "It is testing."