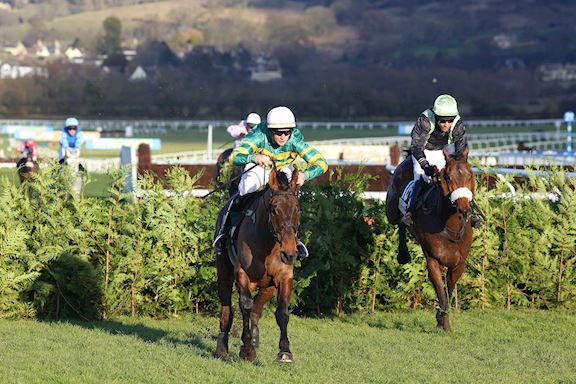 French trainer Emmanuel Clayeux is sending over three runners for The November Meeting at Cheltenham this weekend.

Urgent De Gregaine (11st 11lb) is the most recent French-trained horse to win at the Home of Jump Racing, having caused a 50/1 shock on his UK debut in a cross country chase at the track in January, 2017.

The 11-year-old has since run well in the two most recent runnings of the Glenfarclas Chase at The Festival™ presented by Magners, finishing second in 2018 and third in 2019 behind Tiger Roll.

Diesel D'Allier (10st 3lb), who is five years younger than his stablemate, is a three-time winner around Pau's cross country course. He finished a staying-on fifth on his latest start in a cross country race at Vichy on 28 September.

Clayeux said: "Urgent De Gregaine knows Cheltenham well. He has a lot of weight, but I don't think that will be a problem.

"He has not run since The Festival due to a slight injury, but it was nothing serious. He is in good form.

"With my other horse Diesel D'Allier, I want to see if he will adapt to the cross county track at Cheltenham. I am not convinced he will but, if he does, he could come back in the future."

Thatsmyseat has run three times over hurdles, including a second at Moulins in June, and last time out finished third on her chasing debut at Lyon Parilly on 13 October.

Defi Du Seuil and Apple's Shakira are two others to have passed through his hands and both were impressive winners of the JCB Triumph Trial Juvenile Hurdle in 2016 and 2017 respectively.

Clayeux said: "Thatsmyseat has quite a bit of experience in France and, as we are bringing over other runners, we thought this would be a good test for her.

"Looking at the entries, there are some good horses in the race. She will have to adapt to the track, but she has already run well over hurdles and fences.

"I think she is improving."

Good to Soft, Soft in places on all courses (Chase, Hurdle and Cross Country).