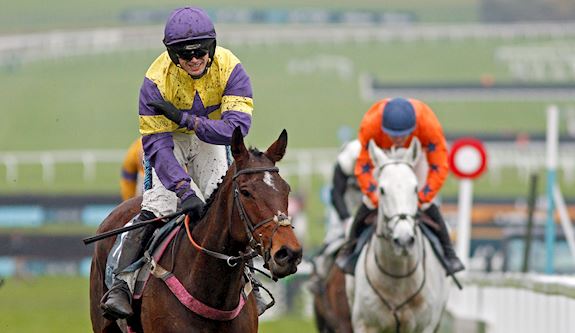 Described as a "bridesmaid" by trainer Kerry Lee, Happy Diva finally enjoyed her day in the sun with a thrilling success in this afternoon's feature race at Cheltenham Racecourse, the £160,000 G3 BetVictor Gold Cup under 3lb claimer Richard Patrick.

A 14/1 chance, Happy Diva was always travelling well in the two and a half-mile event and was vying for the lead at the penultimate fence, at which 4/1 favourite Slate House, who was travelling very well, fell.

From there, Happy Diva, an eight-year-old daughter of King's Theatre, kept on tremendously under pressure to fend off the persistent Brelan D'As (20/1) for Paul Nicholls and Barry Geraghty to score by a neck.

Happy Diva took her career earnings over the £250,000 mark this afternoon and a delighted Lee paid tribute to her stable star.

She said: "What a brilliant horse Happy Diva is. She has been the bridesmaid once too often, but she is a Listed winner over fences.

"Happy Diva beat Magic Of Light last term who went on to finish second in the Grand National, so the form was there!

"She had always been on the coat tails and it's great to win today.

"It was a great ride by Richard. We came into the race with a gameplan and thankfully it has worked. We had a plan to be positioned by the rail and she travelled really well throughout and jumped beautifully.

"Happy Diva is a tough and gutsy mare and her class shone through.

"It is great to have the Roseff family [winning owners] here today. They have been with the yard since my father [Richard] started over 30 years ago.

"It is great for them all to be here today. They are fantastic owners as if we have a quiet day, they always say there is another one. If we have a great day, boy do they celebrate.

"I think it's five years since dad bought her in Ireland - mum and dad went together and bought her as a store - and I am absolutely over the moon."

Conditional jockey Richard Patrick scored the biggest victory of his career in the £160,000 G3 BetVictor Gold Cup on the Kerry Lee-trained Happy Diva.

The eight-year-old mare, a daughter of King's Theatre, beat the fast-finishing Brelan D'As by a neck at odds of 14/1. She was the first mare to take the race since Lady Cricket in 2000.

Patrick said: "It's a dream, I couldn't have had a better run round. She was very, very unlucky in this race last year. She was travelling like a dream and I couldn't have been happier with where I was, but a bad crash happened in front of us and we got brought down [four fences from home]. She has got what she deserved today.

"She is unreal to ride because she travels so well and jumps brilliantly. You can sit wherever you want to - she is almost going too well a lot of the time, but she is epic. She is the best horse that I have ever ridden. I think it is probably the 20th time I have ridden her, something like that, and we've had six wins. She's brought me to all the big days and she always runs her heart out without winning.

"The horses have been a bit hit and miss, but they have still been running OK. We have quite a nice bunch, a few less horses this year, but a massive thank you to the owners for keeping me on her and Kerry for keeping the faith. It's magical.

"Kerry and I have built up a great partnership. Happy Diva is probably the best one but we've got some nice horses coming through; you just need a bit of luck - especially in these big handicaps - and last year we had none, so it's nice to have it this year.

"This is massive for me, especially just coming towards the end of my claim. I think I've got 13 [wins] left now [until he loses his claim] and you need to be being seen on these big days. It just makes you more hungry and want more."

TIZZARD LEFT WONDERING WHAT MIGHT HAVE BEEN WITH SLATE HOUSE

Colin Tizzard was left ruing what might have been with Slate House as the 4/1 favourite for the £160,000 BetVictor Gold Cup fell at the second-last fence when seemingly full of running.

Ridden by Robbie Power, the seven-year-old had lacked fluency with his jumping in the early stages of the two and a half-mile event but travelled ominously into contention before stumbling on landing at the penultimate fence - both horse and rider were OK.

Tizzard said: "Watching it live it looked like he came there to win and then watching the replay it looked even more obvious he was going to win. But you've got to jump the fences and the main thing is he has come back safe and sound. Robbie said he was on a perfect stride and didn't know why he fell, but that is racing for you.

"It just proves that he is in that league, which for me is lovely. He used to pull hard, but seems to settle lovely now and is finishing his races. We must not take anything away from the winner, but it looked like he came there to win and we have a very nice horse on our hands."

They questioned his stamina, but Brelan D'As (20/1) fought right to the line before finishing second in today's G3 BetVictor Gold Cup Handicap Chase.

The Paul Nicholls-trained eight-year-old was one of four horses who rose as one at the second-last fence where Slate House, the 4/1 favourite, tumbled on landing. The Kerry Lee-trained Happy Diva (14/1) led narrowly from Brelan D'As at the last and held that advantage to the line, winning by a length and creating a memorable first big racing success in the fledgling career of Welsh conditional jockey Richard Patrick. Warthog (33/1), ridden by David Noonan for David Pipe, was third beaten 13 lengths, while Belami Des Pictons (10/1) finished fourth.

Nicholls said of the runner-up: "It was a good run, but he had always threatened to run a big race and I thought jumping the last he was going to win. Sadly, for us the winner kept finding a bit more.

"I'm delighted with him, while our other runner [Magic Saint, who finished fifth under Harry Cobden] probably just needed the race after a wind operation in the summer.

"I've no idea where we go now, but we could come back here in a month's time. He was stepping up in trip compared to recent runs, but I was always confident he would stay today and he got 2m6f last year in the Peter O'Sullevan [Memorial Handicap Chase at Newbury] against Kapcorse. He's just been a bit unlucky."

Barry Geraghty, back in the saddle and riding winners again after a long lay-off - he broke his leg at Aintree in April - rode Brelan D'As and said: "He ran a great race, but just could not match the winner. I came with a wet sail at the last, but the winner was waiting for me and picked up again. My fellow stayed all the way to the line."

David Noonan enjoyed a terrific spin on the David Pipe-trained 33/1 chance Warthog, but after a bold show at the head of affairs the grey was unable to live with Happy Diva (14/1) and Brelan D'As (20/1) up the hill and was beaten just over eight lengths.

Noonan said: "Jumping is his asset - he's a very good jumper - and when he won at Sandown last season he used it to burn them off. He seems to run well fresh and it's been a huge run today. He's kept going, but unfortunately he hasn't had the legs of the first two."

Circumstances conspired against fourth-placed Belami Des Pictons, who soon found himself in an unpromising position at the rear of the field and could never get competitive. Venetia Williams might well step him up in distance next time.

She said: "They went off so fast and he was a bit slow into his stride. He'd been off a long time and he was a bit taken aback, and then he was hampered at the second. I didn't see what happened, but they got into a pickle and he was tailed off. He's done well really.

"I don't know what we'll do next, but he might run over three miles at Ascot before Christmas."