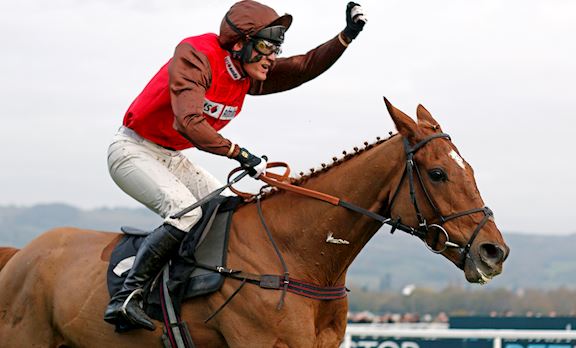 FIVE OUT OF FIVE FOR JATILUWIH

Jatiluwih's victory in the BetVictor Intermediate Handicap Hurdle was trainer Philip Hobbs' second of the day, giving him a 7.91/1 double after Thyme Hill won the first race.

It was Jatiluwih's fifth consecutive win for Hobbs. The 11/4 favourite, who beat Falco Blitz by two and a half lengths, was bought from France by owner-rider David Maxwell - for whom it was a first Cheltenham success - in the spring.

Hobbs said: "We hoped he was still well handicapped - he might not be after today! I'm chuffed for all of us, and I didn't know it was David's first Cheltenham winner.

"He'll probably go back chasing before very long. He's won a chase in France already, and has won all of his five runs in England - I don't know yet, but he could well go back chasing."

JATILUWIH HAS STAR POTENTIAL FOR MAXWELL

David Maxwell could have a star on his hands as 11/4 favourite Jatiluwih made it five wins in as many starts in Britain with a convincing victory in the £25,000 BetVictor Intermediate Hurdle.

Maxwell steered the French-bred gelding to a two and a quarter-length success and also owns the five-year-old, who displayed an impressive turn of foot to wrap up proceedings in a matter of strides in the two miles and five furlong event.

Bred by Guy Cherel, Maxwell has always held Jatiluwih in high regard and he is hopeful of an exciting future with the son of Linda's Lad.

Jatiluwih formed part of a 7.9/1 double for Philip Hobbs following the victory of Thyme Hill (11/8 favourite) in the opening G2 Ballymore Novices' Hurdle.

He said: "Jatiluwih is a total machine. Guy Petit found him for me in France and he said 'This is a proper horse, mark my words'- I wasn't so sure, but he was 100 per cent right. He has done nothing wrong in the UK and is five from five now.

"I'm unimportant in the scheme of this sport, the horses are what matters in the sport and what make it such a wonderful sport. They are such noble animals and, when you get a horse that tries like he does, my goodness, you just want to give them your all in response.

"This is why I love doing it - I think it is such a privilege to be able to do it, so I owe it to my family. They put up with a lot of hours on the road and a lot of hours at racecourses. When you sit on a horse like this, it makes it all worth it."

Jatiluwah (11/4f) claimed the honours for amateur rider David Maxwell in theBetVictor Intermediate Handicap Hurdle, but it was a familiar feeling for connections of runner-up Falco Blitz (13/2).

Nicky Henderson trained the second placed finisher, and joked: "Every time that Maxwell fella has a winner I seem to train the one behind him. He is a great guy though who I admire immensely. I was an amateur once like him so I know what it is like - he is very effective though.

"We were delighted with that, he has run a great race. I didn't know if he would handle the ground so it was something of a fact-finding mission."

Nico de Boinville was aboard the five-year-old gelding, who went down by two and a quarter lengths, and said: "I was happy with that run, and I'm pleased for David Maxwell. He has such infectious enthusiasm and puts so much into our sport - we love him in the weighing room.

"Our horse will jump a fence one day and should give his owners [large syndicate Axom LXXVII] plenty of fun in the seasons ahead."

Irish trainer Paul Gilligan enjoyed Festival success in 2010 with Bertie's Dream in the Albert Bartlett Novices' Hurdle and is now looking forward to returning in March with close relative Shanwalla after the 12/1 chance finished under five lengths third behind Jatiluwih (11/4 favourite) in the BetVictor Intermediate Handicap Hurdle, ridden by son Liam.

Gilligan said: "I'm absolutely over the moon. He's only a small horse but he's a little tiger and will never give up. We've changed our tactics today, as we usually make the running, and all credit to Liam, who gave him some ride to get the best out of him today.

"We'd like to come back here in March with both him and Born By The Sea (fifth in the opening G2 Ballymore Novices' Hurdle), who ran well but possibly isn't a Graded horse."

He added: "I won the Albert Bartlett with Bertie's Dream, and this horse is out of a full sister. Bertie's Dream was also third here at the November Meeting, and 'AP' rode him that day."

Milton Harris was pleased with fourth-placed Jacamar and said: "He's had plenty of racing but he's only four. He'll win one of these one day."