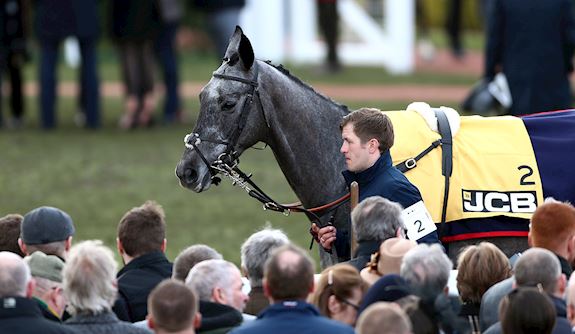 Hobbs was previously successful in extended two-mile contest with future Champion Hurdle hero Rooster Booster (2002) and went on to enjoy further victories with Detroit City (2006), Menorah (2010) and Garde La Victoire (2014). He currently shares the record for most wins (four) in the Unibet Greatwood Hurdle with Martin Pipe.

The five-year-old front-runner was placed at G1 level in the 2017/18 campaign. After a restricted season over hurdles in 2018/19, he really rekindled his form on the Flat in the spring with victories at Lingfield, Kempton and Salisbury. Following an encouraging third back over hurdles in Listed company at Market Rasen in September, he was the tenacious all-the-way winner of the Listed Sodexo Handicap Hurdle under talented conditional Ben Jones at Ascot on 2 November.

Hobbs said: "Gumball is a possible runner in the Greatwood.

"The race is under consideration if ground conditions suit.

"I was delighted with his performance at Ascot last weekend and hopefully there is more to come now off his current handicap mark (147)."

Gumball is a 12/1 chance with sponsor Unibet.

Benny's Bridge (Fergal O'Brien, 10st 9lb) sauntered to an eight-length success in the Matchbook Betting Exchange Podcast Conditional Jockeys' Handicap Hurdle over an extended two miles at Cheltenham's opening meeting, The Showcase, on 25 October. The six-year-old has been well-supported in the ante-post market, coming in from an opening 33/1 to 14/1 with sponsor Unibet.

Gloucestershire-based O'Brien is enjoying a really purple patch, with nine winners in the last fortnight at a strike rate of 39 per cent.

O'Brien gave an update on Benny's Bridge, commenting: "Benny's Bridge is in good form and the Greatwood is the target.

"He did it very nicely at Cheltenham last time and we were delighted with the manner of his victory.

"He has gone up 10lb for winning that event and hopefully he can run a big race in the Greatwood.

"He likes Cheltenham and we are looking forward to it."

Currently sharing 10/1 favouritism with Unibet are Sebastopol (Tom Lacey, 10st 9lb), an impressive winner at Wincanton in October and Fusil Raffles (11st 10lb). French import Fusil Raffles, one of eight contenders for trainer Nicky Henderson, is unbeaten in 2019, landing the G2 Adonis Juvenile Hurdle at Kempton Park in February and G1 Champion Four Year Old Hurdle at the Punchestown Festival in May.

The November Meeting gets underway on Friday, 15 November with Countryside Day and continues on Saturday, 16 November, featuring the £160,000 BetVictor Gold Cup. Family Fun Day is the third and final day on Sunday, 17 November. Book tickets here.