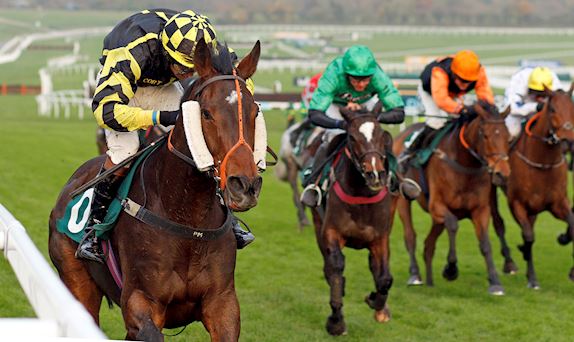 Lee had ridden 17 point-to-point winners and three in hunters' chase, but today's success for Aylesbury trainer Phil Middleton was on a different level. It was also a first ever Cheltenham winner for Middleton, but unfortunately he was laid up at home.

He was represented by Kevin Merry, who works for him on an 'as and when basis' and claimed to have put the finishing touches to Golan Fortune's preparation when riding him on Thursday. He said: "I'm sure Phil would have been here if he could have, but he really didn't sound well."

Lee has had a slightly chequered career of late, falling foul of BHA Regulations on the point-to-point circuit and serving a 42-day ban for wearing a body protector which did not fit required standards and attempting to hoodwink local stewards. The ban does not end for another two weekends.

He admitted his mistakes after today's race and said: "I speak my mind and probably shouldn't do, but I've learned that you cannot cheat the British Horseracing Authority and the Point-to-Point Authority. Hopefully this win is my path to redemption.

"He ran a little keen early on and I thought the trainer will be getting cross with me, but the horse had the choke out. I was told to drop in but for my last couple of rides I felt we were going too slow and I was holding onto the horse for too long.

"Today I decided to get out there and ride a race, and the horse is such a willing partner. He's got more in him. Phil told me to go and walk the track and it was so much better on the rail [stands side] so I went for that and he held on.

Connections of the second-placed horse, Eminent Poet, in the Listed Spinal Injuries Association Big Buck's Handicap Hurdle were delighted with the way "Poet the pony", as the diminutive Montjeu eight-year-old gelding is known, ran.

Trainer Venetia Williams said: "You have to be delighted. He's Poet the pony - he's tiny - but he just handles this ground so well and he's run a terrific race.

"I keep threatening to school him over fences, but I think we'll shelve that for a day or two."

The 10/1 chance finished two and a half lengths behind the winner, Golan Fortune, and a length and a half ahead of third-placed Tobefair.

Eminent Poet was ridden by Charlie Deutsch, who said: "That was brilliant - a great run. Second again is annoying but he's a star of a horse. He tries really hard and loves the ground. I thought we might just get back to them going up the hill, but not quite."

Ridden by Tom Bellamy, the nine-year-old son of Central Park finished four lengths behind the 14/1 winner Golan Fortune, trained by Phil Middleton, in the three-mile event.

Hamer confirmed that Tobefair will now be targeted at Graded races, commenting: "He had to carry so much weight and we are delighted with that effort.

"We knew we were up against it with his welter-burden so he will not be running in handicaps anymore.

"He'll go in Graded races. When a race comes about, you've got to go for it, so that is why we decided to come here.

"He didn't jump the third-last hurdle great, but we're over the moon with him.

"Tobefair is home in one piece, he is every owner and trainer's dream - he is a credit to train.

"He always give his best and we're so proud to have Toberfair."