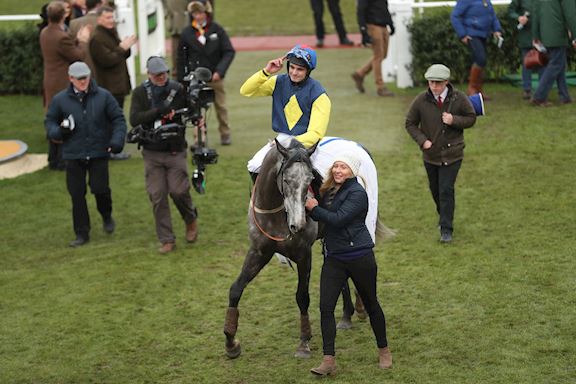 Guitar Pete is on course for a third tilt at the £160,000 G3 BetVictor Gold Cup (42 entries), the highlight of The November Meeting at Cheltenham on Saturday, 16 November.

Guitar Pete has contested the prestigious two and a half-mile handicap chase for the last two years, finishing ninth in 2017 after being badly hampered and a staying-on third last year.

Trained in Cumbria by Nicky Richards, Guitar Pete gained his biggest success over fences to date when defeating Clan Des Obeaux in the G3 Caspian Caviar Gold Cup at the Home of Jump Racing in December, 2017.

The nine-year-old, a dual G1 winner over hurdles in 2014, made the perfect start to the current campaign in a Listed handicap chase at Wetherby on 1 November, recording a cosy three and a half-length victory over Happy Diva (Kerry Lee).

Richards said today: "Guitar Pete seems good after Wetherby and the plan now is to have a look at the BetVictor Gold Cup.

"It was a grand performance at Wetherby, especially for a first run of the season. It was his first race since last December and you would expect him to sharpen up a little bit.

"We will have to wait and see whether or not Aso [Venetia Williams, likely top-weight] is going to run in at Cheltenham, as there is a chance we would be too far out of the handicap if he does.

"We will keep an eye on that, but the intention is to run provided we are in the handicap."

Weights for the BetVictor Gold Cup will be revealed at noon on Wednesday, 6 November.

Slate House (Colin Tizzard) is the 7/1 favourite with BetVictor, following an impressive 11-length victory in the Matchbook Best Value Betting Exchange Novices' Chase at The Showcase on 26 October.

14/1 Black Corton, Secret Investor, Us And Them

The November Meeting starts on Friday, 15 November and concludes on Sunday, 17 November.