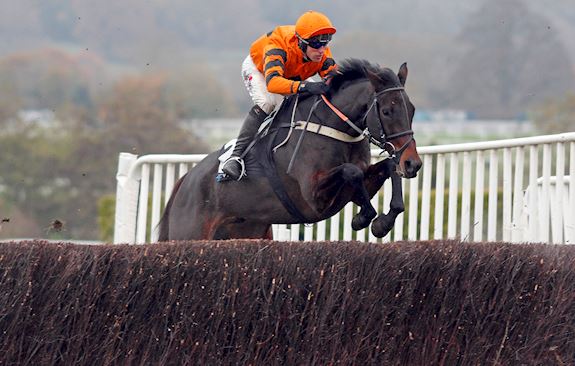 The nine-year-old son of Westerner, trained by Colin Tizzard, was the 11/4 joint-favourite and won by three lengths from Achille.

A jubilant Tizzard said: "It takes a bit of nerve, riding a race like that, doesn't it? I ask him [Robbie Power] what he's going to do, and he says he'd sooner get beat by coming late than by getting there too early. He says, 'I'll play it late. Don't expect to see me until the end'.

"It's nice to get winners under your belt - it gives you a bit more confidence. We've had enough beaten by a short-head in a photograph finish in the past 10 days. It made me nervous, watching that!

"It was poetry. Robbie came really late and he ran right to the line. All our instructions are always, 'be in the first four and see how you get on'. Robbie's an ice-cool man. He jumps slowly - we've tried blinkers, we tried him back over hurdles last year to try to get him to jump faster in a race, and it didn't make any difference. He's not in a hurry in life; I'd like him to hurry up a bit sometimes!

"I don't know what we'll do next. He came fifth in the Ladbrokes Trophy [at Newbury] last year; if you ever knew [owner] John Snook, you'd have a job to stop him having a go at that. That's a fortnight's time, which is probably a bit quick. He'll go up a few pounds for this. I don't know. He's in the Ladbrokes for a reason but we thought this was the easier option. To win this was lovely."

Asked about the Grand National, Tizzard replied: "He wouldn't be out of it now. If you ride him like that - we've seen a different horse today. I can't believe we've been riding him wrong for the past four years, but we'll see."

A talented, but slightly quirky individual, the Colin Tizzard-trained West Approach had not won a race for nearly two years, but with Power waiting until after the final fence to go for home the nine-year-old scooted clear for victory by three lengths. West Approach (11/4jt fav) beat long-time leader Achille (10/1) - the 11/4jt fav Ramses De Teillee finished fourth.

Western Approach is owned by John and Heather Snook, who also own Thistlecrack, a five-time G1 winner and a half-brother to today's winner. Power said: "He's a bit careful at the jumps and takes a bit of time to warm into a race. You're no good in this game if you don't learn from your mistakes, and I got there too soon on him last time and he pulled up in front.

"I said to the owners and Colin when I went out that whatever happens I'm not going to the front until after the last and they gave me their full support. When he settles and relaxes he's got plenty of pace over a a staying trip.

"The Welsh National could be more his race than the Ladbrokes Trophy [at Newbury]. It's up to Colin and the owners, but my route would be the Welsh National. I don't think he's brave enough to take on the National fences at Aintree. He's too careful, and for that race you almost need something that's a bit ignorant."

POTTERS IS A LEGEND

Lucy Wadham was delighted with the performance of Potters Legend (7/1) who finished a creditable third in the £60,000 G3 BetVictor Smartcards Handicap Chase, which was won by 11/4 joint-favourite West Approach (Colin Tizzard/Robbie Power).

Potters Legend had every chance in the home straight but tired in the run-in, finishing three and three-quarter lengths behind the winner.

Wadham said: "We're absolutely delighted with that. Jack [Quinlan - jockey] said Potters Legend needs it wetter and further. If we could get into a Welsh National, we would certainly look at that. We need to go up a few pounds first though.

"He travels like a dream, jumps brilliantly and is so honest - he just lacks a gear."

Potters Legend's jockey Jack Quinlan was equally chuffed with the performance. He commented: "Potters Legend came back from a long layoff here over hurdles last month, and he needed that, but has improved out of all recognition today. He would want the ground even softer if he could."

"He is a pleasure to ride and would be a thrill to pilot in a National."

Three-quarters of a length in front of Potters Legend was 10/1 shot Achille. Venetia Williams was initially thrilled with Achille's three-length second, for the grey had jumped brilliantly in the lead, but her delight turned to concern when jockey Charlie Deutsch returned on foot.

Achille was not far behind him, but he was slightly lame and when it was suggested that the injury was hopefully trivial she replied: "It's never trivial when they finish a race lame."