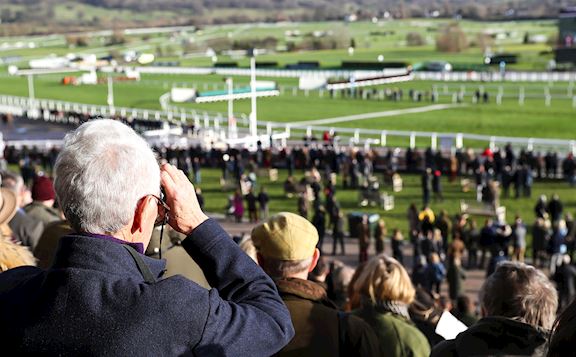 Cheltenham offers the perfect way to see in the New Year and the 2020s with a cracking seven-race programme tomorrow, New Year's Day, Wednesday, 1 January.

Leading Irish bookmaker Paddy Power returns to sponsorship at the Home of Jump Racing by supporting three races, including the most valuable contest of the afternoon, the £70,000 G3 Paddy Power Handicap Chase (2.00pm, 12 runners) over an extended two and a half miles.

Heading both the weights and the market at 100/30 with Paddy Power is Kalashnikov (Amy Murphy/Jack Quinlan), a G1 winner at Aintree in April who went down by a nose to the re-opposing Oldgrangewood (Dan Skelton/Harry Skelton) in a valuable handicap chase over two and a half miles at Newbury on 29 November. For his nose defeat, Kalashnikov meets Oldgrangewood on 1lb better terms tomorrow.

Also prominent towards the head of the market are Magic Saint (Paul Nicholls/Harry Cobden), a staying-on fifth in the G3 BetVictor Gold Cup at The November Meeting and Saint Calvados (Harry Whittington/Gavin Sheehan), who took a two-mile handicap chase under top-weight at Cheltenham's opening meeting of the season, The Showcase, in October.

Mister Whitaker (Mick Channon/Adrian Heskin) makes his seasonal reappearance but is a three-time Cheltenham winner, taking the Listed Close Brothers Novices' Handicap Chase at The Festival™ presented by Magners in 2018 and the G2 Cure Parkinson's And Hambo Foundation Silver Trophy Chase on his latest start in April.

There is one Irish-trained runner in Ex Patriot (Ellmarie Holden/Mr Derek O'Connor). Ex Patriot put up an amazing performance at The Festival in 2017 when, despite getting loose before the G1 JCB Triumph Hurdle, he still managed to come home a close fourth to Defi Du Seuil. Switched to fences at the end of 2018, Ex Patriot has won two of his six outings over the larger obstacles and has run well at Graded level on his two starts this season, latterly when third in the G2 Florida Pearl Novice Chase at Punchestown in November.

Holden, who is based in Ballyhale, County Kilkenny, said today: "Ex Patriot is in good form and Cheltenham on New Year's Day has been the target since his last start.

"He has run two good races in Graded company so far this season and has come out of his latest run in good form.

"He won a handicap over fences on his last start last term and, whilst this looks competitive, we are hopeful of a good run.

"It's great to be returning to Cheltenham with Ex Patriot and we are looking forward to it."

The hugely exciting Champ (Nicky Henderson/Barry Geraghty), who races in the famous silks of J P McManus, won twice at G1 level over hurdles and is unbeaten in two starts since switching to chasing this season, most recently in G2 company at Newbury in November. He is the red-hot 4/7 favourite with Paddy Power.

The pick of Champ's five rivals is Midnight Shadow (Sue Smith/Danny Cook), who landed the G2 Dornan Engineering Relkeel Hurdle on this card a year ago and has made a promising start to his chasing career. There is also a rare French-trained New Year's Day runner with Matfog (Arnaud Chaille-Chaille/James Reveley) lining up. Matfog has won twice from his three starts over fences in France, most recently in Listed company at Compiegne in November.

Paul Binfield, racecourse ambassador for Paddy Power, said: "The return of Paddy Power to race sponsorship at the Home of Jump Racing has worked out very well indeed. The Paddy Power name is attached to a typically competitive G3 Cheltenham handicap chase, a fascinating G2 novices' chase and a competitive handicap hurdle - a perfect mix for the company. It is also heartening to see representation from Ireland and France on the card

"All eyes will be on the mighty Champ in the Paddy Power Broken Resolutions Already Dipper Novices' Chase while it will be fascinating to see what Might Bite produces as he bids to get back on track in the Paddy Power 69 Sleeps To Cheltenham Handicap Hurdle."

Action gets underway at 12.15pm with the £25,000 Listed Ballymore Novices' Hurdle (six runners, 2m 4f 56y), in which Redford Road (Nigel Twiston-Davies/Sam Twiston-Davies) steps back in trip having won the G2 Albert Bartlett Novices' Hurdle over three miles at Cheltenham on 14 December. Another recent winner in the field is Welsh Saint (Nicky Henderson/Nico de Boinville), who could not have been more impressive when scoring by 15 lengths at Warwick on 12 December.

Cogry (Nigel Twiston-Davies/Sam Twiston-Davies) is a four-time scorer at the Home of Jump Racing and heads the weights for the £25,000 Markel Insurance Handicap Chase (12.50pm, 10 runners, 3m 2f 70y). Cogry, who will turn 11 tomorrow, has looked as good as ever this season and was last seen when winning the G3 BetVictor Handicap Chase at The International on 13 December for the second year in succession.

The going at Cheltenham is currently: Soft, Good to Soft in places.

Conditions are forecast to be cloudy but predominantly dry, with temperatures of around eight degrees Celsius.