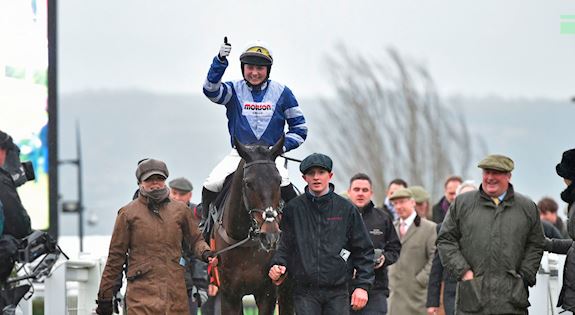 Horses trained in Ireland and France account for 15 of the 24 entries for the Glenfarclas Cross Country Handicap Chase, one of the highlights on day one of The International at Cheltenham, Friday, 13 December.

Run over three and three-quarter miles of Cheltenham's cross country course, the £35,000 contest is the final leg of the Crystal Cup, an 11-race series that features Europe's premier cross country chases.

Bolger has also entered Blue Templar and Yanworth, who won the 2016 G1 Christmas Hurdle at Kempton Park when trained by Alan King. Yanworth made a winning cross country debut in the Risk Of Thunder Chase at Punchestown on November 17.

Diesel D'Allier struck for France in the Glenfarclas Cross Country Handicap Chase at The November Meeting and five French-trained entries include Easysland and Amazing Comedy, who are both based with David Cottin. Cottin currently lies second in the trainer standings for the Crystal Cup.

Easysland is seeking a fifth straight success, with the five-year-old having captured the penultimate leg of the Crystal Cup, the Listed Grand Steeple Chase-Cross-Country de Compiegne on 11 November, a race in which Amazing Comedy was fifth.

Nine-year-old Amazing Comedy has made three previous cross country appearances at Cheltenham, including a close fourth at The International last year.

Cottin, who is based at Lion-d'Angers in western France, said today: "Easyland has been a very progressive horse this year and the plan is for him to cover over and run in the Glenfarclas Cross Country Handicap Chase at Cheltenham on Friday.

"He has now won his last four races, with his latest success coming in a Crystal Cup race at Compiegne. He is still only a five-year-old, so we are very pleased with what he has already achieved and he is a very exciting horse for the future.

"I would be hoping that the ground is not too soft but the cross country course at Cheltenham is usually a good racing surface.

"Amazing Comedy, who has run at Cheltenham before, will also be coming over."

With six points already on the board and a potential 12 further points available, Easyland would be the winning horse in the 2019 Crystal Cup if successful on Friday. The current leader Pareto has 16 points but is not entered at Cheltenham.

Patrice Quinton, who currently heads the trainer standings for the Crystal Cup, could be doubly represented by D'Jango and Decret, while Azrou D'Ex (Augustin de Boisbrunet) has also been entered.

For further information about the Crystal Cup, please go to https://crystalcup.org

The most valuable race on day one of The International is the £60,000 G3 BetVictor Handicap Chase (2.30pm) over three and a quarter miles, which has 14 entries including the first two home from 12 months ago - Cogry (Nigel Twiston-Davies) and Singlefarmpayment (Tom George).

Wholestone (Nigel Twiston-Davies) won the mallardjewellers.com Novices' Chase at The November Meeting and the eight-year-old, a G1 runner-up over hurdles, heads 14 entries for the £25,000 International Decorative Surfaces Novices' Chase (12.45pm).

His rivals could include the Nicky Henderson-trained duo of Pym and Diablo De Rouhet plus Stoney Mountain (Henry Daly), winner of a valuable G3 handicap hurdle at Haydock Park on his latest outing.

The International continues on Saturday, 14 December, with another seven races headed by the £140,000 G2 Unibet International Hurdle, which is due to feature the unbeaten Pentland Hills, and the £130,000 G3 Caspian Caviar Gold Cup.

Good, Good to Soft in places (Chase and Hurdle)

The forecast is for unsettled conditions