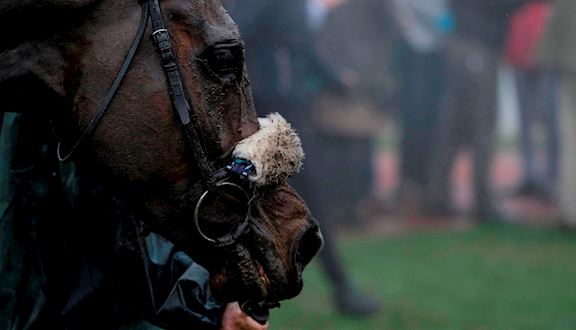 If The Cap Fits is set to provide stiff opposition to Paisley Park in the £60,000 G2 galliardhomes.com Cleeve Hurdle (3.35pm, 3m, 11 entries), one of five graded contests at Cheltenham on Festival Trials Day this Saturday, 25 January.

If The Cap Fits, who races in the familiar colours of Paul and Clare Rooney, relished the step up to three miles on his final start last season, gamely defeating Roksana and Apple's Jade (Gordon Elliott IRE) in the G1 Stayers' Hurdle at Aintree's Grand National Festival in April.

Trained by Harry Fry, the eight-year-old has had a light campaign so far this term, with his sole start resulting in a battling success over Call Me Lord in the G2 Ascot Hurdle over just shy of two and a half miles in November. He was winning that contest for the second year in succession.

That victory under a penalty has left If The Cap Fits with a career-high rating of 166, just 3lb shy of last year's G1 Stayers' Hurdle champion Paisley Park (Emma Lavelle).

Fry said: "The Cleeve Hurdle is the plan for If The Cap Fits, as long as the ground is not too testing.

"It is his first run at the track, but it will give him plenty of experience of Cheltenham before the Stayers' Hurdle in March.

"It will be great to finally take on Paisley Park. Our horse is improving all the time and it promises to be a fascinating race."

Fry may allow exciting novice King Roland to take his chance in the £32,000 G2 Ballymore Novices' Hurdle (3.00pm, 15 entries) over an extended two and a half miles.

King Roland would be stepping up in distance after not coming out of second gear to win a maiden hurdle by 19 lengths at Exeter on New Year's Day.

The trainer added: "King Roland is a possible for Cheltenham on Saturday.

"He is a horse with an exciting future, and I was delighted with his performance at Exeter.

"We will make a decision towards the end of the week before deciding whether he runs, but he is a horse I like a lot.

"A step up in trip will be important for him going forward."

King Roland could clash with unbeaten point-to-point graduate Sporting John (Philip Hobbs), who has caught the eye with two impressive victories over hurdles at Exeter. The five-year-old is owned by J P McManus after being sold for £160,000 at the Tattersalls Cheltenham Festival Sale in March.

Multiple G1 scorer Bristol De Mai (Nigel Twiston-Davies) is set to fly the flag for the older generations, having been kept fresh since finishing second to Lostintranslation in the G1 Betfair Chase at Haydock Park in November.