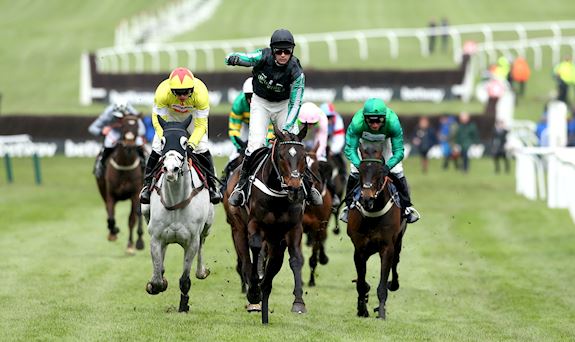 News broke on Tuesday morning that the Nicky Henderson-trained Altior is out of tomorrow's G1 Betway Queen Mother Champion Chase. Altior is a four-time winner at The Festival™ presented by Magners, having landed the G1 Skybet Supreme Novices' Hurdle in 2016, the G1 Racing Post Arkle Novices' Chase in 2017, plus the G1 Betway Queen Mother Champion Chase in 2018 and 2019.

Shortly after, Nicky Henderson released the following statement on Twitter: "Sadly we have had to finally admit defeat with Altior and therefore scratch him from the Champion Chase tomorrow. This is really disappointing as the improvement yesterday was so encouraging that we were optimistic of getting there. That improvement did not continue last night and is only fair to him and everybody else to reluctantly withdraw and try to make sure we can get him back for Aintree, Punchestown or the Celebration Chase at Sandown that he has won the last two years. I am sure it will still be a great race but so sad that this great clash that we were all anticipating cannot happen so we will have to lend somebody else his crown. I wish them all well."

There was plenty of lively debate and discussion on this morning's 'The Opening Show' on ITV4, as Oli Bell, Luke Harvey, Sir AP McCoy and Matt Chapman looked ahead to day one of The Festival.

Former jockey Luke Harvey said of G1 Unibet Champion Hurdle favourite Epatante: "She is very fast and slick over her hurdles, but weirdly enough that would worry me a little. She has the best form and I wouldn't put people off backing her though."

Matt Chapman said: "Supasundae has won an Irish Champion Hurdle and despite being 10 years of age, I could see him going well. He will sit behind and stay on well - he'll do for me each-way."

Ruby Walsh was interviewed on the Willie Mullins-trained contenders and said of G1 Close Brothers Mares' Hurdle favourite Benie Des Dieux "She's had a better prep than last year, and I think the rain will have helped her."

Matt Chapman said: "All I wanted to say on this race was three words - Benie Des Dieux. But as a punter you could look at backing Honeysuckle each-way now at the price she is."

The panel went on to discuss the G1 Racing Post Arkle Novices' Chase. AP McCoy said of the JP McManus-owned Fakir D'Oudaires: "His jumping has been his strongest asset so far and I would be making the most of that today."

Matt Chapman summarised the market movers and said: "Benie Des Dieux has been bet off the boards in the Mares' Hurdle. In the opener Abacadabras has been backed into 7/2 from 7/1, and in the Champion Hurdle Epatante is 5/2 from 7/2 - has JP lumped on?"

Matt Chapman also said: "Breaking news - Former Champion hurdler Faugheen will run at Cheltenham this week. He has been declared."

The waiting is finally over! The Festival™ presented by Magners and the best four days of racing action are finally upon us and we kick off with a superb day of action this afternoon, which features four G1 contests, including the £470,250 Unibet Champion Hurdle. Bookmakers have reported brisk business this morning and seen solid support for a number of horses throughout the seven-race card.

The G1 Unibet Champion Hurdle (3.30pm) is the feature race of the day and Epatante is a solid favourite in her bid to provide Seven Barrows maestro Nicky Henderson with an eighth victory in the two-mile hurdling championship. The six-year-old is unbeaten in two starts this term, backing up victory in Listed company at Newbury in November with a dazzling five-length win in the G1 Christmas Hurdle at Kempton on Boxing Day. Owned by JP McManus, targeting a ninth success in the G1 event, Epatante is the solid 5/2 favourite from 3/1 with the sponsor Unibet. Epatante is one of five runners for Henderson and stable companion Call Me Lord, winner of the International Hurdle at Cheltenham in December is a 14/1 chance from 18/1 with Unibet, who are paying four places on the contest.

In the opening race of The Festival, the £125,000 G1 Sky Bet Supreme Novices' Hurdle (1.30pm), the Gordon Elliott-trained Abacadabras has attracted sustained support. A clearcut eight-length winner in G1 company at Leopardstown in December, the six-year-old is a 3/1 chance from 7/1 for the meeting's curtain-raiser with Sky Bet, whilst Chantry House, unbeaten in two starts for Nicky Henderson this term is a 6/1 shot from 7/1 with the bookmaker who are paying four places.

Notebook is unbeaten in four starts over fences and heads the market for the £175,000 G1 Racing Post Arkle Novices' Chase (2.10pm). Ridden by Rachael Blackmore and trained by Henry de Bromhead, the seven-year-old is Unibet's 11/4 favourite from 3/1 for the two-mile event as he targets a third G1 victory in succession. Rouge Vif recorded a decisive seven-length victory in the G2 Kingmaker Novices' Chase at Warwick last time out and is a 10/1 chance from 14/1 with Unibet.

The Kim Bailey-trained Vinndication was a ready winner of a competitive handicap at Ascot in November and is the rock-solid 6/1 favourite with Unibet for the £110,000 Ultima Handicap Chase (2.50pm). Unibet who are paying five places on the three miles and one furlong event, have also reported support for the Ben Pauling-trained Kildisart who is an 8/1 chance from 10/1.

The £120,000 G1 Close Brothers Mares' Hurdle (4.10pm) promises to be one of the races of the Festival with three-time G1 heroine Benie Des Dieux taking on the unbeaten Honeysuckle. However, punters can only see one winner and Benie Des Dieuxhas been backed as if defeat is out of the question with Unibet. Trained by Willie Mullins, she is the 8/15 favourite from 8/11 as she targets a second victory in the two miles and four furlong event. Honeysuckle by contrast, the mount of Rachael Blackmore, is weak in the market drifting out to 11/4 from 2/1.

The Dan Skelton-trained Beakstown was a creditable third at Cheltenham in December and targets a first winner over fences in the ultra-competitive £70,000 Northern Trust Company Novices' Handicap Chase (4.50pm). Trained by Dan Skelton and ridden by his brother Harry, the seven-year-old is a 12/1 shot from 16/1 with Unibet, whilst the Nicky Henderson-trained Precious Cargo, who tasted success at Haydock earlier this season is 14/1 from 16/1 with the bookmaker.

In the concluding contest of the day, the £125,000 National Hunt Chase (5.30pm), the Willie Mullins-trained Carefully Selected, who is unbeaten in three starts over fences so far this season is the solid 11/8 market leader from 15/8 with Unibet.

Going into the The Festival™ presented by Magners in 2020, Deep Run and King's Theatre share sire honours, each with 16 victories from 13 individual winners. Deep Run, the 14-times champion jump sire from 1980 to 1993, obviously cannot better his score, but King's Theatre, five times the champion, can. His final crop are aged eight this year.

Chasing them are Oscar and Presenting, both with 15 wins, and both with opportunities this week to improve their scores. Oscar, runner-up five times on the overall list, leads the way for individual Cheltenham Festival winners, with 14.

Oscar and Presenting, four times overall champion, have the best tally of Grade 1 Festival wins, with nine each. King's Theatre has eight, followed by Deep Run and Bob Back with seven each.