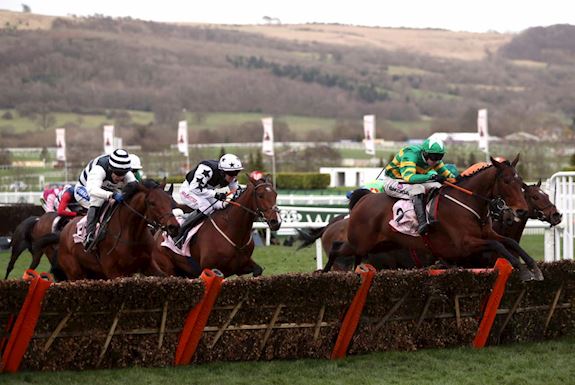 It has also been a successful day for trainer Gordon Elliot, who added this victory to that of Envoi Allen in the G1 Ballymore Novices' Hurdle earlier in the day.

For good measure Elliot trained the 1-3-4 in this race too. Mark Walsh drove the juvenile home a length clear of Night Edition (16/1, David Pipe/Tom Scudamore), with Elliott's Saint D'oroux (14/1) a further three lengths back in third.

The County Meath man said: "It was grand. I was worried about the ground for all the horses but they ran well.

"Mark gave the winner a great ride, giving him a lovely bit of room the whole way around and he jumped well. We always thought this was the right race to go for.

"That's our third winner of the week - the horses are flying."

For Mark Walsh this was a first winner of the week, and he would have been relieved to join the JP McManus party.

Walsh said: "It was a little bit rough early on over the first three hurdles. I pulled him out down the back for a little bit of light and, once I did that, he travelled a lot smoother and jumped a lot better.

"I got a nice lead into the straight off Daryl and didn't want to hit the front too soon but I could hear everyone coming behind me, so I had to keep going. Luckily, he winged the last and galloped all the way to the line.

"The second horse gave me a battle and he wanted it out there - he put his head down and galloped all the way to the line, so he is a good, tough horse."

Aramax leads over the last

Tom Scudamore was pleased with the performance of Night Edition (16/1) who finished a creditable second to 15/2 winner Aramax in the £80,000 Boodles Juvenile Handicap Hurdle

Trained by David Pipe, Night Edition ran on well in the home straight to finish a length behind the Gordon Elliott-trained winner.

Scudamore said: "It felt like they went a really good gallop. I wasn't actually travelling that well early on, I was probably playing a bit of poker, but the further Night Edition went, the better he started going.

"He came on the bridle coming down the hill and, going down to the last, I thought that if we wing it, we will win. We have winged it and unfortunately the other horse has just found a bit more.
"Night Edition has come a long way in a very short space of time and everyone has done a cracking effort with him. To have improved as much as he done from Taunton until now speaks volumes for him and for everybody in the yard."