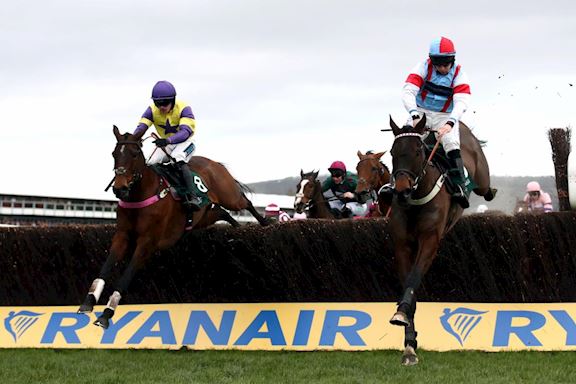 Harry Whittington registered his first ever winner at The Festival™ presented by Magners following the victory of the well-supported 100/30 favourite Simply The Betts in the £110,000 G3 Brown Advisory & Merriebelle Stable Plate.
Ridden by Gavin Sheehan, the seven-year-old son of Arcadio made a mistake at the final fence, but rallied gamely under pressure to forge clear in the closing stages to record a length and a quarter success over the Kerry Lee-trained Happy Diva (20/1).
Whittington, along with owners Kate and Andrew Brooks, had narrowly been denied in the £350,000 G1 Ryanair Chase earlier on the card with Saint Calvados suffering a neck reversal to Min and connections were delighted to record a winner at The Festival.
The winning trainer said: "It's about everyone else. Andrew, Kate and George Brooks love the game and put so much into it. I am so thrilled for them. We have had five goes this week and inched closer, closer and closer and got there, so it's fantastic for all of his team as well.
"All my team have given everything this winter and Laura Collett has done an amazing job with this horse's jumping. It's a great team effort, with so many people involved, and I am so proud of everyone."
4.10pm Brown Advisory & Merriebelle Stable Plate Handicap Chase (Grade 3)
1 Simply The Betts (Kate & Andrew Brooks) Harry Whittington 7-11-04 Gavin Sheehan 100/30f
2 Happy Diva (Will Roseff) Kerry Lee 9-11-04 Richard Patrick (3) 20/1
3 Mister Whitaker (Tim Radford) Mick Channon 8-11-07 Adrian Heskin 22/1
4 Oldgrangewood (Chris Giles & Sandra Giles) Dan Skelton 9-11-02 Harry Skelton 11/1
23 ran
Distances: 1¼, 1¾, ½
Tote Win: £3.60 Place: £1.70, £5.60, £4.30, £2.80 Exacta: £86.60
Harry Whittington - 1st winner at The Festival
Gavin Sheehan - 2nd winner at The Festival
Sheehan delight
Jockey Gavin Sheehan was delighted to gain his second Festival success when 100/30 favourite Simply The Betts landed the Grade 3 Brown Advisory & Merriebelle Stable Plate Handicap Chase
Gavin Sheehan said: ""He was class and was actually waiting for a bit of company all the way. He jumped unbelievably and pulled it out of the bag after the last. I was praying for the line and I know my grandfather was looking down on me as well.
"The fear from jumping the last upsides and then you get a head in front - it's that fear that you have of something coming and nailing you. That's the fear you have but, as soon as you pass the line, it's just what dreams are made of."
Reflecting on his 2020 Festival, Sheehan added: "To be honest, I felt bad for Olly Murphy because things didn't work out and I really fancied Itchy Feet - that's racing. Skandiburg was the same and then I was just touched off with Saint Calvados, who ran a massive race. It's the ups and downs of racing but I got some spin off him there."
Lee's Diva is a joy to have
Happy Diva was an honourable second to Simply The Betts in the G3 Brown Advisory & Merribelle Stable Plate, finishing a length and a quarter behind the Harry Whittington-trained winner at odds of 20/1.
The nine-year-old King's Theatre mare, who won the G3 BetVictor Gold Cup at Cheltenham in November, is trained by Kerry Lee and was ridden by Richard Patrick.
Lee said: "Her head was in front at the last, but the dead ground and the extra couple of yards didn't quite suit her. She's run a fantastic race; I'm very, very proud of her. She's an absolute superstar. Look at her now, she thinks the cheers are for her. She's a joy to have and we are very, very lucky. Mr Roseff [Will Roseff, Happy Diva's owner] is here enjoying the day, and she's taken us so many places. She's a horse in a million."
Patrick said: "She's run an absolute cracker. She doesn't know how to run a bad race. She's a great little mare."
Apple's Jade retired
Superstar mare Apple's Jade has been retired. Trained by Gordon Elliott and owned by Gigginstown House Stud, Apple's Jade was victorious in 15 of her 28 starts.
The eight-year-old was an 11-time G1 winner which included victory in the 2017 Mares' Hurdle at The Festival.
Apple's Jade amassed £814,910 in prize money during her career and the news was announced after her eighth-placed finish in today's G1 Paddy Power Stayers' Hurdle.
Her latest G1 victory came in the G1 Frank Ward Memorial Hurdle at Leopardstown in December, one of three victories in the race, whilst she also captured the G1 Hatton's Grace Hurdle on three occasions.
Eddie O'Leary of Gigginstown House Stud paid tribute to the wondermare, commenting:
"Apple's Jade has the been horse of a lifetime. She has been absolutely fantastic.
"No mare has ever won 11 G1s. She is a very special mare.
"One of the most special days for me was when she won the 4-Y-O Juvenile Hurdle at Aintree in April, 2016 when she won by a record 41 lengths.
"She will be covered now and enjoy the retirement she deserves.
"She has just been an awesome mare. To beat the boys over two, two and a half and three miles is something very special - she was just fabulous."
Apple's Jade - career in numbers:
Races: 28
Wins: 15
G1 victories: 11
Career earnings: £814,910