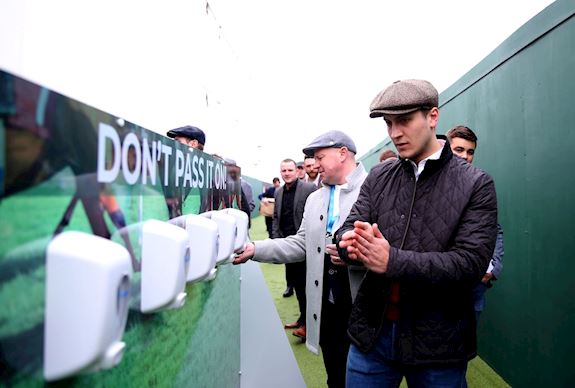 Business as usual for Cheltenham

Ian Renton, Regional Director Cheltenham and the South West, Jockey Club Racecourses, issued a positive bulletin regarding the continuation of the The Festival™ presented by Magners despite the rising impact of coronavirus in Great Britain.

The Manchester City vs Arsenal Premier League match scheduled for this evening has been postponed with a number of Arsenal players going into self-isolation having come into contact with the chairman of Olympiakos in a Europa League match two weeks ago, who revealed he had tested positive for the virus yesterday.

However, for Renton and the Cheltenham team it is merely business as usual ahead of day two of The Festival.

Renton said: "We had a fantastic first day here yesterday with seven brilliant races, which reminds us about what the sport is really about. All the measures we put in place were well used by racegoers and we were topping up our hand sanitiser gel stations all day long. The racegoers heeded the advice we gave to ensure that hygiene was kept at a maximum.

"The attendance being down was not a surprise. The last fortnight ticket sales have been very quiet. We had tremendous sales until then and I was delighted to see 60,000 people here yesterday in an atmosphere of such good racing, so it was a good start.

"We have been liaising with the government throughout this; their advice has been extremely helpful. We've been following that advice to the letter and we will continue to do so until the conclusion of The Festival."

Highlights from 'The Opening Show' on ITV4

Some of today's key participants were interviewed on this morning's 'The Opening Show' on ITV4, as Oli Bell, Alice Plunkett, Mick Fitzgerald,Sally-Ann Grassick and Matt Chapman looked ahead to the second day of The Festival™ presented by Magners 2020.

Alice Plunkett had an update on the fitness of two leading jockeys, and said: "News from the weighing room. Paddy Brennan is out for the day, fingers crossed he will be riding later in the week. Richard Johnson is back today if he passes the doctor - he is remarkable."

A huge day ahead for Gordon Elliott, with Envoi Allen and Tiger Roll two of the headline acts of the 2020 Festival, and likely to be the cornerstones of many a multiple bet today. Elliott spoke to Sally-Ann Grassick: "Keith Donoghue is happy with Envoi Allen, if he's happy then I am. Tiger Roll is in good form, but the ground is the worry for me - he's not as good on heavy ground."

Keith Donoghue was later interviewed aboard Tiger Roll as he stretched his legs in the Cheltenham sunshine. Donoghue said: "He knows where he is alright. It is amazing to be part of the story with Tiger Roll."